Strong women come in many forms. Using religious imagery and iconic poses like Norman Rockwell’s “Rosie the Riveter”, artist Saba Chaudhry Barnard created a powerful series of portraits of American Muslim women. Through the portraits, the Pakistani-American artist celebrates the diversity, intersectionality, and strength of women, hoping to expand viewers’ understandings of Muslims and show a different power and diversity than what is typically depicted in mainstream media. An-Noor means “the light” in Arabic—through halos, fire, and gold used in the portrait series, Saba Chaudhry Barnard allows these Muslim American women’s inner lights to shine through. 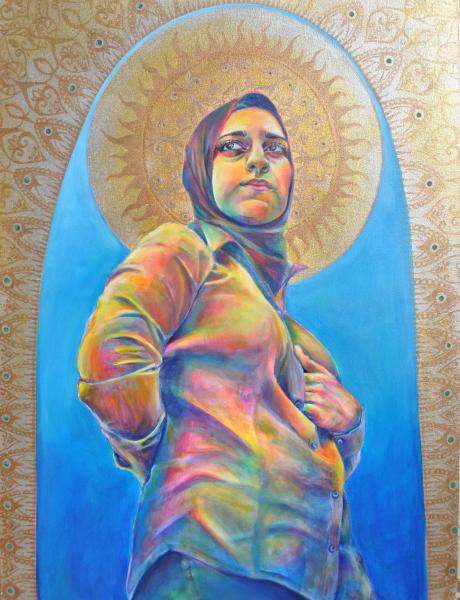 “…in a picture I want to say something comforting as music is comforting. I want to paint men and women with that something of the eternal which the halo used to symbolize, and which we seek to confer by the actual radiance and vibration of our colourings.” –Vincent Van Gogh

“An-Noor is a series of portraits of American Muslim women. The portraits demonstrate the diversity that exists amongst American Muslimahs, yet the paintings are not specifically about Islam. These humanist portraits are inspired by all sorts of religious imagery—be it ancient Egyptian or Hindu gods and goddesses, or Byzantine representations of Christian figures. They incorporate a strong feminist element—a feminism that is inclusive and recognizes that female strength comes in many forms.

The series’ title, An-Noor, means “the light” in Arabic. The title refers to the fact that I am not just painting these women’s features, but attempting to illustrate their internal light and beauty. My subjects are posed in the manner of historical icons such as Norman Rockwell’s “Rosie the Riveter,” Giotto’s “Madonna Enthroned,” the Queen of Swords from Tarot, and even Superman and Napoleon. One painting’s imagery is directly derived from Ayat An-Noor. To represent their inner light, the women are crowned by halos; they are ablaze with fire; they are surrounded by gold. Overall, we see an overlapping and coexistence of forms and traditions from the East and the West, an image that reaches back through visual history, religious traditions and imagery. This series is a celebration of women. I aim to create timeless, iconic images of women that help expand the viewer’s visual vocabulary and understanding of Muslims beyond the one-dimensional depictions that are pervasive in art and media. I hope that when people view the series, they recognize the light that surrounds the figures as the same light that is burning within themselves because really it’s not about defining Muslim women, or anyone, but undefining them. It’s about undefining ourselves and connecting to that universal something that exists within all of us, that ‘something of the eternal.’” 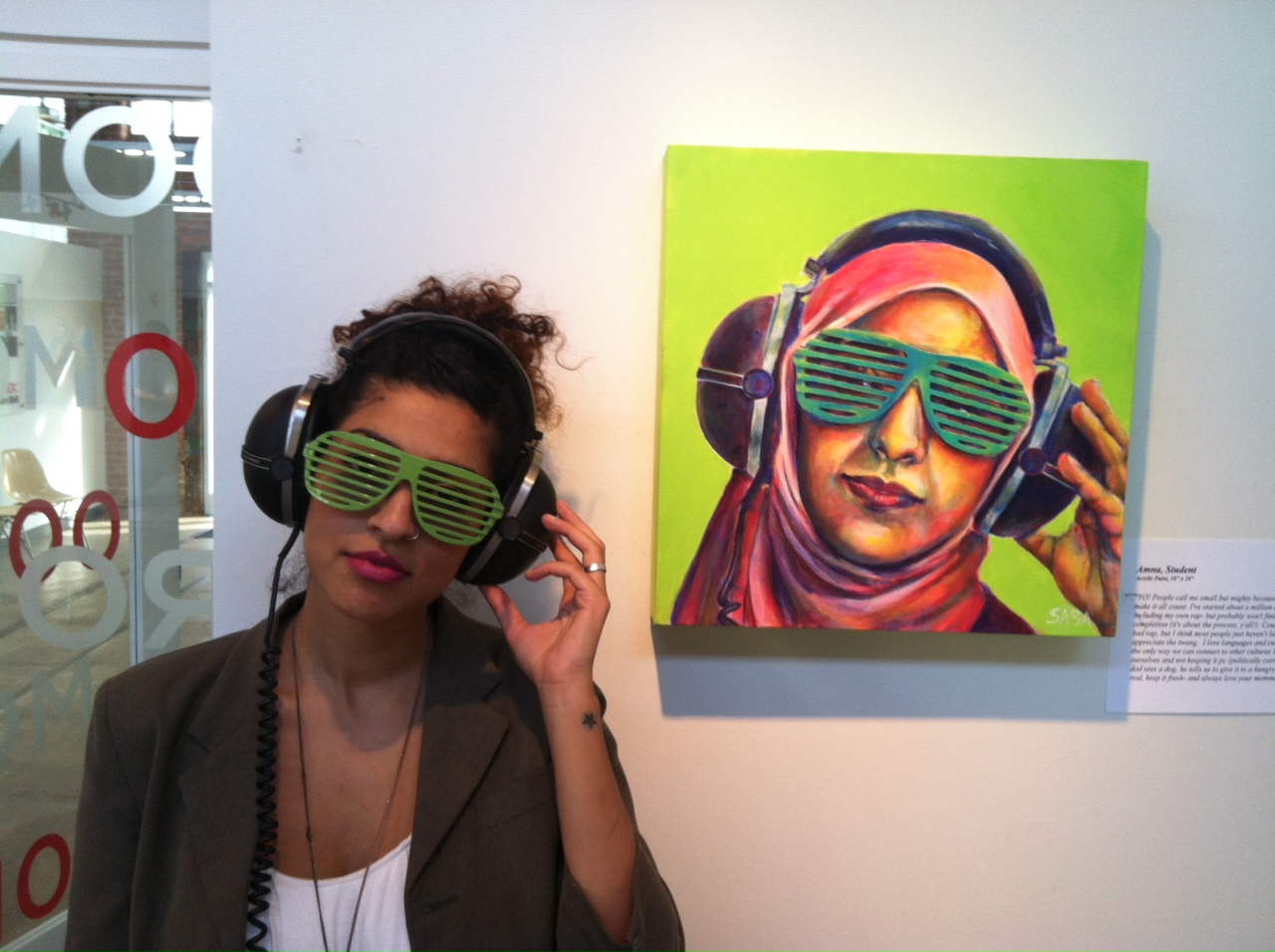 About the Artist
Saba Chaudry Barnard Artist ImageA first generation Pakistani-American woman, I was confronted by my “otherness” from a very young age, being a token of diversity at my private school in North Carolina.  As a brown-skinned, big-haired, mosque-going, curry-eating, mustached girl who couldn’t date, eat bacon, or wear shorts, I was the token of diversity at my private school in North Carolina.  I envied my blue-eyed, blonde-haired, pop-collared, seer-suckered, church-going peers who vacationed on islands.  I assumed that these were the sorts of things that really mattered.For years, I tortured myself trying to blend in, trying to stand out, trying to “find myself” within these little boxes.  But it’s impossible.  Instead, I make art that is, I hope, less categorized and reductive, reflecting that the boundaries we create between us and inside of us are, in fact, an illusion.  So my work is not so much about defining Muslim women, or anyone, but undefining them.  About undefining ourselves and connecting to that universal something that exists within all of us.  That “something of the eternal.”As I move forward, I am attempting to show this universal something through an increasingly emphasized combination of geometric and organic design, communicating meaning through the use of these flat forms.  I feel that this is a further exploration of my heritage, incorporating Islamic art’s emphasis on geometric pattern with the colorful, flowering, curled lines of South Asia, balanced and integrated within a contemporary American context.
SABA CHAUDHRY BARNARD is a first-generation American woman from North Carolina. Her artistic perspective draws from her experience growing up Pakistani and Muslim in the United States. Ms. Barnard’s portraits provide commentary on the labels that we use to identify and separate ourselves, with specific regard to gender, race, and religion. Her focus is on the universal human experience, and she uses her portraits of Muslim women to demonstrate that diversity is not a separating factor, but a place to begin connection. View Saba’s featured content piece, “Technicolor Muslimah,” and visit her website at: www.artbysaba.com