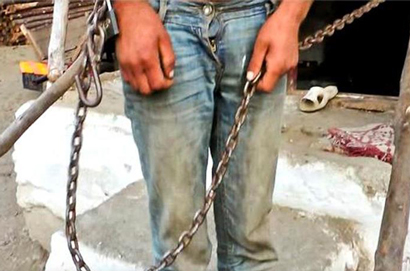 Romanian police have detained 38 people suspected of holding dozens
of vulnerable young men and boys like slaves for years, chaining them up
and forcing them to do various types of work, or fight each other for
entertainment.

The arrests took place on Thursday following large-scale police raids
the day before in Berevoesti, 170km north of the capital, Bucharest.
Five people, including two boys aged 10 and 12, were freed after the
raids.

The captives were “attached with chains and straps … beaten [and]
humiliated”, starved of food and fed on scraps, prosecutors from the
Directorate for Investigating Organised Crime and Terrorism, (DIICOT)
said.

They were “left fully naked, cold and hot water being thrown
alternatively on them. Their hands and feet were tied and they were told
to eat off the ground or to fight each other to amuse the suspects,”
they said.

Since 2008, about 40 victims were “captured in public places, near
churches or train stations, or at their homes” and forced to do
household chores, look after animals, beg in the streets, and do illegal
logging, prosecutors said.

Some of the victims are believed to have suffered sexual abuse as well, prosecutors said.

Ninety people from Gamacesti, a Roma district within the municipality
of Berevoesti, in the Arges region, were initially thought to have been
involved.

Those freed on Wednesday “had visible traces of open wounds all over
their bodies, particularly their scalps. They appeared physically and
psychologically traumatised,” Adrian Macovei, from the Romanian child
protection agency, told local media.

But local residents told journalists on Thursday that they did not
believe the claims, saying that the boys had been homeless orphans and
that they were not mistreated.

“They were fed, they had money and they did not want to leave,” a
woman, who declined to give her name, told The Associated Press news
agency in Gamacesti.

“These people, if they came to work in our home, we’d give them food,
we gave them shelter, we didn’t do anything bad to them,” another
woman, who also refused to give her name, told the AFP news agency.

“They were unhappy, with no mother or father. We felt sorry for them. They were like our children,” she added.

But Florin Proca, the mayor of the town on Berevoesti, which has
administrative oversight for local villages including Gamacesti, said he
was “stunned”.

“I couldn’t imagine that in 2016 such soulless people could exist. I
have seen shocking photos of the slaves, people held against their will,
abused,” he said.

Local child protection spokeswoman Iuliana Matei said that two
victims and 19 children of suspects had been placed in care centres.