After Empowering the 1% and Impoverishing Millions, IMF Admits Neoliberalism a Failure 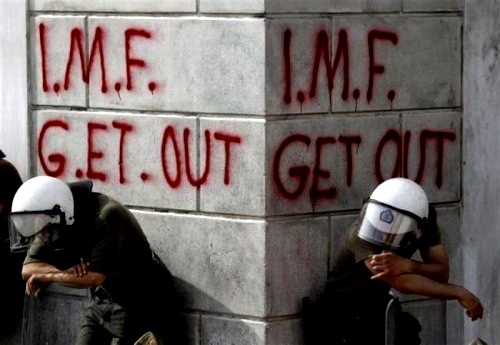 By Benjamin Dangl, Towards
Freedom, 31 May 2016.
Last week a research wing of the International Monetary Fund came out with a report admitting
that neoliberalism has been a failure. The report, entitled, “Neoliberalism:
Oversold?” is hopefully a sign of the ideology’s death. They were only about 40
years late. As Naomi Klein tweeted about the report, “So all the
billionaires it created are going to give back their money, right?”
Many of the report’s findings which strike to the core of the ideology echo
what critics and victims of neoliberalism have been saying for decades.
“Instead of delivering growth,” the report explains that neoliberal
policies of austerity and lowered regulation for capital movement have in fact
“increased inequality.” This inequality “might itself undercut
growth…” As a result, the report states that “policymakers should be more
open to redistribution than they are.”
However, the report leaves out a few notable items on neoliberalism’s
history and impact.
The IMF suggests neoliberalism has been a failure. But it has worked very
well for the global 1%, which was always the IMF and World Bank’s intent. As
Oxfam reported earlier this year, the
wealthiest 1% in the world now has as much wealth as the rest of the planet’s
population combined. (Similarly, investigative journalist Dawn Paley has proven
in her bookDrug War Capitalism that far
from being a failure, the Drug War has been a huge success for Washington and
multinational corporations.)
The IMF report cites Chile as a case study for neoliberalism, but never
mentions once that the economic vision was applied in the country through the
US-backed Augusto Pinochet dictatorship – a major omission which was no casual
oversight on the part of the researchers. Across Latin America,
neoliberalism and state terror typically went hand in hand.
The fearless Argentine journalist Rodolfo Walsh, in a 1977 Open Letter to
the Argentine Military Junta, denounced the oppression of that regime, a
dictatorship which orchestrated the murder and disappearance of over 30,000
people.
“These events, which stir the conscience of the civilized world, are
not, however, the greatest suffering inflicted on the Argentinean people, nor
the worst violation for human rights which you have committed,” Walsh wrote of
the torture and killing. “It is in the economic policy of this government where
one discovers not only the explanation for the crimes, but a greater atrocity
which punishes millions of human beings through planned misery. . . . You only
have to walk around greater Buenos Aires for a few hours to check the speed
with which such a policy transforms the city into a ‘shantytown’ of ten million
people.”
This “planned misery,” as Naomi Klein’s Shock Doctrine vividly
demonstrates, was the neoliberal agenda the IMF has advocated for decades.
The day after Walsh mailed the letter to the Junta he was captured by the
regime, killed, burned, and dumped into a river, one of neoliberalism’s
millions of casualties.
Toward
Freedom editor Benjamin Dangl is the author of The Price of Fire: Resource Wars and Social Movements
in Bolivia and Dancing with Dynamite: Social Movements and States in
Latin America. He is a doctoral candidate in Latin American history
at McGill University. Twitter: @bendangl