By Fernanda Santos, The Washington Post, 3 February 2021. Phoenix has extremely hard water. I was recently
reminded of this when I had to replace my washing machine, which was damaged to
the point where repairs made no financial sense. I bought a state-of-the-art
model with more settings than I have learned to use and invested in a water
softener to extend the life of the new washer. These are just a few of several
home improvements I’ve made and paid for since my husband died three years ago. 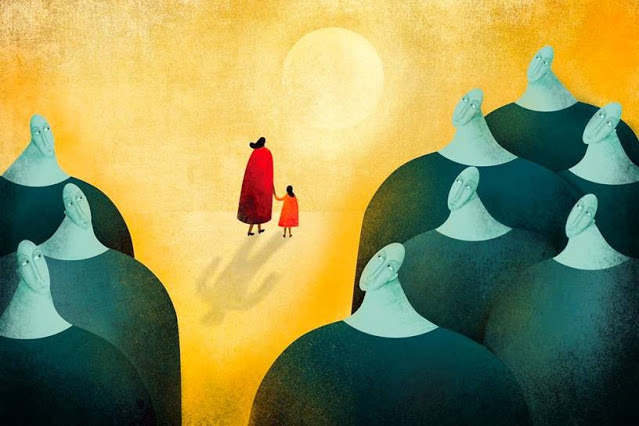 Before purchasing the water softener, I researched
online, asked neighbors for recommendations and checked Better Business Bureau
complaints to find a quality machine at a good price — all by myself. Yet when
I reached out to a company to make an appointment for an estimate, the young
woman on the other end of the line asked, “Is your husband going to be there?”

It’s exhausting to be a widow and single mother — and
not just because of the responsibilities. For me, fatigue comes from having to
constantly engage with complete strangers who don’t know what to make of a
woman without a man. I’m sure that their comments and I’m-so-sorrys are
well-intentioned. But when they speak and behave in ways that presume something
odd, or deficient, about a woman making her way through life uncoupled, they
contribute to a widespread effort to hold women back. How, I ask myself, is
this still happening in 2021?

We’re all too familiar with the overt
attempts to deny women the respect they’re due — like when a certain former
president of the United States says a
congresswoman “is not even a smart person,” or when a major newspaper publishes
a column in which the incoming first lady, a doctor of education, is called “kiddo.”
We hear how threatened men can be by the magnitude of women’s accomplishments.
And we see how the need to put women down — or limit them with narrow
expectations — functions as a cowardly weapon of subjugation.

Yet since my husband died, I’ve become more conscious
of the other, subtler ways women are confined to “safe,” unchallenging roles. I
never gave much thought to the pervasiveness of the patriarchy before then, in
part because I was fortunate to have a husband who didn’t mind being outshined.
Becoming a widow has shown me how other men respond to my strengths and
weaknesses — like the plumber who asked me out to dinner after repairing a leak
in my garage, as if my aloneness licensed his overtures.

My eyes have been opened by the endless questions I face
about my marital status. I’ve had to fill in spaces with the name of my
daughter’s father in forms that don’t give me the option to leave the space
blank without an explanation. I understand that in some cases this is to
protect parental rights. But I don’t get why, when I recently made an
appointment with a pediatric ophthalmologist, the nice young woman who helped
me had to ask — just “to be sure” — if I was indeed the policy holder for my
daughter’s health insurance.

It’s not as if a woman on her own is an
aberration. Nearly 1 in 3 American women are single, and a record number of women — nearly 34 million — have never married. Almost a quarter of American mothers live without a partner. Yet in some circles, at least, a
woman’s worth is still defined by the size of the rock on her finger or the
surname that replaced hers.

It’s especially saddening to see this attitude in
other women. After I push back, they tell me, as the ophthalmologist’s
assistant did, that they’re just following orders or complying with procedure.
They apologize, and I believe they’re sincere. I see my former self in them.
But I wonder whether they see how they perpetuate the very stereotypes that
hold them back.

Our society is slowly becoming more aware of the ways
women are denied their rightful opportunities and respect. Speaking out against
egregious misbehavior is liberating and important — #MeToo showed us that. But
it’s not enough. Every time we’re inclined to doubt a parent’s ownership of a
health insurance policy, or a customer’s ability to choose and pay for a water
softener, or a woman’s capabilities based on her relationship status, we must
ask ourselves whether we’d think or act the same way with a man.

My daughter is 11 and wise beyond her age. She
listened in as I called about the water softener, my phone in speaker mode as I
chopped strawberries for our breakfast. As soon as I hung up, she blurted out,
“People assume that because you’re a woman, you do quote-unquote woman work, so
you need a man who does quote-unquote man work to pay for it.”

All I need, really, is salt and a filter
to soften the water at my house — a house whose mortgage and bills I pay every
month, and where I raise a girl who I hope will think of her own options and
capabilities as limitless and believe the same of other women.