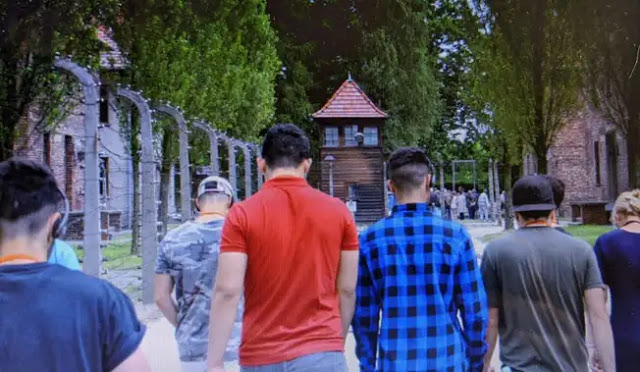 The “Muslims in Auschwitz” project: A visit from Duisburg to Oswiecim. Credit: Burak Yilmaz

As right-wing nativist and racist ideologies gain traction around the world, left-leaning and liberal intellectuals are turning to Germany, the Nazi WWII era and the country’s post-Holocaust project of national atonement and remembrance. They seek transposable lessons for challenging historic racism and crimes against humanity.
However, for activists and intellectuals seeking lessons for how to strengthen a culture of solidarity and collective memory in a multicultural society, Germany has its flaws.
Despite its opposition to hyper-nationalism, Germany’s Holocaust memory culture fails to include those members of its society who are not ethnically German. In particular, Germans of Muslim/immigrant background who were invited to rebuild the war-torn country after World War II, have until recently been considered external and irrelevant to the foundational German narrative of learning from past mistakes to strengthen the Federal Republic’s democratic character.
In the 2000s, Muslim-background Germans unexpectedly became central to the country’s Holocaust memory culture – but as a target, not as welcome participants.
Since that pivotal period, Turkish and Arab background Germans went from being considered irrelevant to Germany’s attempts to come to terms with its Nazi-era past, to being considered its prime obstacle, a status shared to a lesser extent by Germans from the former Communist state of East Germany (and now the stronghold of the German far right).
Today, Germans of Muslim origin are commonly accused of being unable to relate to Holocaust history, incapable of establishing empathy with its Jewish victims, and of importing new forms of antisemitism to a country that is assumed to have dealt successfully with its own anti-Jewish racism. Newspapers run stories about how Muslim students refuse to attend concentration camp tours, and do not engage with the material in history classes devoted to the discussion of National Socialism. In a country where 90 percent of antisemitic crimes are committed by white right-wing Germans, fingers are still pointed at Muslims for being the major carriers of antisemitism in the country.

Accordingly, the government, NGOs, and Muslim-minority groups have begun to design Holocaust education and antisemitism prevention programs specifically tailored for Muslim-background immigrants and refugees, so they, too, can learn lessons from the Holocaust and thereby embrace Germany’s most important post-war political values. Most strikingly, the government funds programs that teach about antisemitism through personal experience, by taking refugees who have recently escaped war zones themselves to visit Nazi death camps.
In my 15 years of fieldwork in Germany, I have found that, contrary to common perceptions, Muslim background Germans do engage passionately with the Holocaust. But there is a widespread feeling that Muslim minority Germans engage “wrongly” with the Holocaust.
Holocaust educators often complain to me and to others that Muslim Germans express “unsuitable” emotions in response to the Holocaust. What were these “inappropriate” responses? The most common complaints were that participants expressed fear that something like the Holocaust could happen to them too; that they were jealous of the “status” of Jewish victims, and that they felt pride in their own national backgrounds.

Juliana [all the names used here are pseudonyms to protect the subjects’ privacy] worked as a guide at a number of former concentration camps in Germany. I asked about her impressions of Muslim minority Germans visiting the camps. Her response was telling. A man walks towards the main gate with the inscription “Jedem das Seine” (To Each His Own) at the former Nazi concentration camp Buchenwald near Weimar on January 27, 2021.Credit: JENS SCHLUETER – AFP

“Lots of immigrants [meaning Turkish and Arab-Germans] visited,” she told me. “And I had a feeling that they were different from other visitors.”
After stopping briefly, she added, “Now I do not know if they really were different, but I could tell that I and other guides were irritated by them. There was a feeling that they did not belong there and that they should not be engaging with the German past. Somehow their presence at the camp did not fit.”
When I pushed her further to explain what she meant, Juliana said, “For example, when they go to visit the camps, immigrants start to feel like they will be sent there next. They come out of the camp anxious and afraid. I do not like it at all when they do that, and [so] I do not even want to take them there.”
I met Neshide, a petite and well-spoken woman in her forties of Turkish background, because I heard that she organized Holocaust education for immigrant women. Neshide told me that even though the immigrant women who she worked with learned a lot, the training was a very disturbing experience for all of them:
“We were all shocked. How could a society turn so fanatical? We started to ask if they could do such a thing to us as well. We spent a lot of time wondering whether we would find ourselves in the same position as the Jews.” The Grand Mufti of Bosnia and other Muslim religious dignatories walk through the entrance gate of the former Nazi death camp Auschwitz-Birkenau. February 1, 2011.Credit: AP

This is exactly the position Juliana told me that German educators find so disturbing when they teach minorities about the Holocaust. Other Germans apparently found it even less tolerable, and reacted harshly when Neshide and her friends voiced their fear:
“A month later we were at a church as part of our training program. We told them about our project [to educate immigrants about the Holocaust] and then told them that we are ourselves afraid of being victims [one day].
“The people at the church became really angry at us. They told us to go back to our countries if this is how we think. I was really surprised at their reaction. I could not understand why this is not a legitimate question. Why should I not be concerned, personally, about the Nazis?”
During that heated conversation, Neshide repeated Holocaust survivor Primo Levi’s statement: It happened once, so it can happen again.
But this made the ladies in the church even more furious. Neshide and her friends were asked to leave the church. Neshide’s face reddened when she told me this story. She was reliving the shock and dismay she experienced when she was confronted with extreme anger instead of admiration for her empathy and identification with the history of the country of her new citizenship.
German philosopher Edmund Husserl tells us that establishing an intersubjective connection based on our own bodily experience is the core starting point of gaining a perspective about what other persons might be experiencing in their own bodies. Similarly, when we see a racialized, classed, or gendered individual, especially one who experiences discrimination, we are able to have insight into how they might feel because we each have standing in a society that ranks people in terms of such categories.
This empathy is why, when confronted with reminders of the Holocaust, some Turkish and Arab background Germans fear that they too might be victims if something like this were to happen again. Others feel into antisemitism through their experiences of Islamophobia and afterwards feel irritated that antisemitism in Germany is acknowledged, whereas Islamophobia is disregarded. “Traditional” Holocaust education programs in Germany aim at triggering feelings of remorse and responsibility. What I found in my fieldwork is that Muslim-background Germans did not conform with this expectation: they responded, in many ways, in a more visceral way, relating the Holocaust to their own experiences, even when admitting that the scales of experiences are entirely different.
Muslims expressing feelings outside the “expected” range are judged to be lacking in the correct moral qualities and in the capacity to be good citizens. Yet empathic feelings triggered by standing in someone else’s shoes start from and end in the shoes one already owns.
An inclusive Holocaust memory and education needs to create space to help us understand the specificity of the victims of the Holocaust.
But it should also be a space for recognizing that individuals who commemorate and empathize with the victims do not come from the same place: the spectrum of “correct,” respectful and empathetic responses should be welcomed, not penalized, not least when those responses revivify Holocaust memory in such a sharp, thoughtful and contemporaneous way.
In this way, the responses of Germans with Muslim backgrounds are not content to consign the Holocaust to past history; they are, instead, modelling Primo Levi’s words: “Auschwitz is outside of us, but it is all around us, in the air.”