Biden is Right to end US involvement in Bloody Yemen Conflict, but he Needs to end the War itself

By Daniel Martin Varisco, Glen Cove,
N.Y. (Special to Informed Comment), Juan Cole, 8 February 2021. President
Biden’s about face on Saudi support for the war in Yemen, including setting
aside the disastrous idea of designating the Huthis as a unique set of
“terrorists”, is a hopeful step, but the road to peace is a steep climb. As
noted by a recent report of the UN Panel of Experts on Yemen, “All
parties continue to commit egregious violations of international humanitarian
law and international human rights law, including indiscriminate attacks
against civilians, enforced disappearances and torture.” 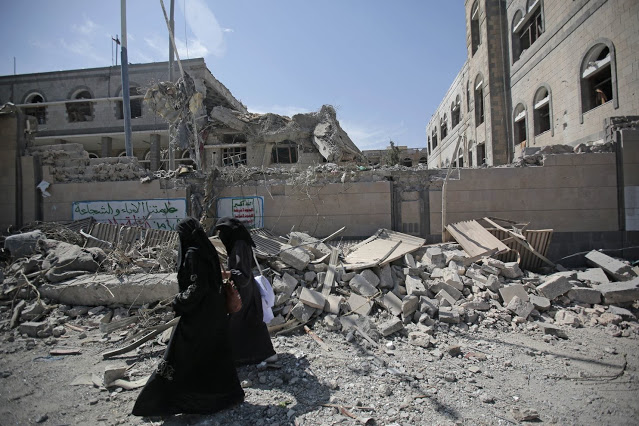 When Saudi Arabia spearheaded a bombing campaign in
March, 2015 to counter the Huthi takeover of Yemen’s interim government, it no
doubt seemed an easy call. But almost six years later it is obvious that this
war has no winner. Every side in the ongoing conflict is a loser, but the worst
loss is that of Yemen’s people. Overall the United Nations announced last
December that the number of casualties from the war and its impact is at least
233,000. Given the lack of reliable statistical data in a war-torn country, the
real number is likely far more. Nor does it account for those wounded, lacking
access to needed health care or facing famine.

There continue to be many ways to die in Yemen. The
Yemen Data Project (https://yemendataproject.org/) records 22,485 Saudi
coalition air raids since the start of the war. Egregious bombings of school
children, funerals and fishing boats may make the world news, but no account is
made of the people buried in ruins or blown into so many pieces of flesh that
they are not recognizable.

Then there is the direct fighting between rival groups
with countless deaths of soldiers, many of them untrained and far too young,
and civilians caught in the crossfire, artillery shelling and mines. War paves
the way for disease, with about a million and half known cholera cases, in
addition to outbreaks of diphtheria, dengue fever and rabies. Some 100,000
Yemeni children are facing death from malnutrition as 20 million of a
population estimated at 29 million are food insecure. All of these ills
continue after the arrival of COVID with no reliable figures on the pandemic’s
toll.

Yemen’s designation by the UN as the worst human-made
humanitarian crisis in the world has not resulted in a political settlement to
end the war that caused it. The spiral to Yemen’s failure as a state
accelerated during the Arab Spring with the removal of former president Ali
Abdullah Saleh in 2012 after 33 years of his dictatorial rule. Yemen’s wealthy
neighbours muscled in and brokered a self-serving deal that put in power a
political hack, Abdrabbuh Mansur Hadi, for what was supposed to be a temporary
transition.

A National Dialogue Conference drew on a wide variety
of Yemeni parties and offered a blueprint for Yemen’s future. However, Hadi’s
tinkering with the set-up of the proposed federal system led to a Faustian
bargain in which the former military of Saleh joined with the Huthi tribal
alliance to stage a relatively bloodless coup in September, 2014. The UN
Security Council made matters worse by resolving that the Saudi war was
justified in reinstalling Hadi, who had fled into exile.

The Huthi coup was an internal affair, no different in
theory than Sisi’s arrest of the democratically elected president of Egypt. As
ardent opponents of both al-Qaeda and the Muslim Brotherhood Islah party, it
would be hard to label the original Huthi power grab as a terrorist act. It is
not possible to know what the Huthi alliance would have negotiated with other
groups in Yemen if the country had been left alone to deal with its political
future. Yemen had overcome a major civil war in the 1960s to establish a
republic in the north and united peacefully (at least at first) with the former
socialist state in the south in 1990. For sure, Iran would have far less
influence than it does today in Yemen.

To understand the problem that Yemen faces, it is
important to note that it has been the only “democratic” state in the Arabian
Peninsula since the downfall in 1962 of the Zaydi imamate and the departure of
the British from Aden in 1967. All of the other states, most bolstered by
recent oil wealth, are run by family-based monarchs and emirs. The Saudi
Kingdom, in particular, has long tried to control Yemen. Ibn Sa’ud invaded the
Zaydi state in 1934 but was beaten back. In the 1980s the ultraconservative
Wahhabi/ Salafi doctrines of the Saudis spread to Yemen, disrupting what had
been a peaceful coexistence of Zaydi Shi’a, Sunni Shafi’ and a pocket of
Ismailis. Poverty-stricken Yemen had no choice but to accept the financial
largesse of its neighbours, but the result has been an increase in sectarianism
and the proliferation of militias and religious zealots often funded by outside
sources.

Yemen has long had its own share of internal conflict,
but it has been inflamed beyond quick repair by foreign involvement. In this
war the Saudis took control of the oil-rich area of Ma’rib and are directly
involved in Mahra on the border with Oman. The Emiratis engaged Yemeni
mercenaries in Yemen’s south and have made huge investments in the Yemeni
island of Socotra. They may be coalition partners, but they both have specific
areas they want to control. The bottom line is that this war never would have
happened without the bottomless supply of military hardware and technical
assistance of the United States and other European arms dealers. Cutting off
that supply will not stop the war overnight, but it is a start. As for the
question of whether more deaths are yet to come in Yemen, you can count on it.