Why has the EU hired an Israeli propagandist?

by David Cronin, Media Watch, 7 January 2021.  Raphael Ahren likes to combine stenography with sight-seeing. (Via Facebook). Israel’s journalists are not renowned for their capacity to surprise. Kudos, then, to Raphael Ahren. He has proven that it is possible to be rewarded by someone you have dragged through the mud. Ahren has just started a new job as the spokesperson for Emanuele Giaufret, the European Union’s ambassador in Tel Aviv. 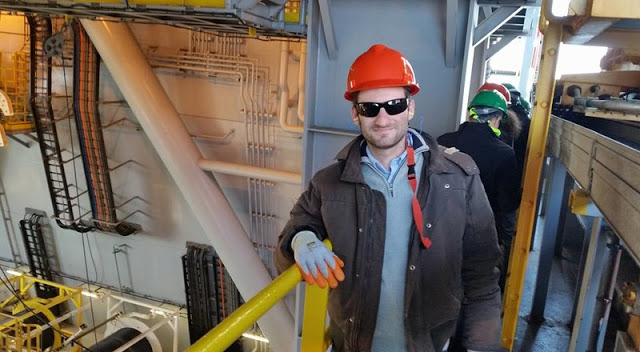 Giauftet happens to be the very same ambassador who Ahren – then working for The Times of Israel website – helped embarrass last year.

When another EU representative suggested that Palestinians sympathetic toward blacklisted organizations may benefit from aid under certain circumstances, Giaufret was “summoned” by Israel’s foreign ministry for “an unusually harsh rebuke,” Ahren stated.

Ahren was not simply reporting on an allegation. He was lending credence to a smear campaign by Israel and its lobbying network, which have long depicted EU funding of Palestinian organizations as support for “terrorism.”

The hiring of Ahren signals that there are few limits to the EU’s cravenness. Even when Israelis try to tarnish the reputation of their envoys, the EU hugs them tight.

The Times of Israel has a unique selling point. Not many other publications can boast they have a former chief of Mossad, a notorious spying and assassination agency, on their editorial boards.

Ahren was the website’s “diplomatic correspondent.” Throughout this nine years in that role, he was a practitioner of hasbara, Israel’s propaganda.

Hasbara is often translated as “explanation.” And Ahren tended to “explain” events dishonestly.

When referring to the 2010 massacre of mainly Turkish activists sailing toward Gaza, Ahren claimed that Israeli commandos “boarded” the Mavi Marmara ship and were then “violently attacked” by the activists.

The truth was that Israel violently attacked a civilian boat in international waters.

To Ahren, the 2018 Great March of Return in Gaza involved “violent demonstrations.”

A medic–unnamed in Ahren’s report–was “apparently trying to help wounded protesters” when she was killed that June, he wrote.

The truth is that the demonstrations were unarmed and that Israel repeatedly gunned down civilians.

The aforementioned medic had a name Razan al-Najjar. She was actually – not apparently – treating the wounded when she was shot dead.

Iran, by Ahren’s assessment, has a “rogue nuclear program.” The truth is that Israel is the rogue as – unlike Iran – it refuses to allow any scrutiny of its nuclear facilities.

When writing about votes at the UN General Assembly, Ahren has alluded to Israel’s “ostensible human rights violations.”

For Palestinians, those violations are anything but “ostensible.” They are a daily reality.

Mark Regev, a spin doctor who became Israel’s ambassador in London, is “soft-spoken and civil,” in Ahren’s opinion. Ahren neglected to point out that Regev has made television appearances, in which he excused Israel’s bombing of schools.

Presumably that is considered acceptable behavior. Though Regev is an apologist for state brutality, he always keeps his cool.

While the EU pretends to be upset about Israel’s settlement activities, the EU embassy in Tel Aviv strikes a friendly pose toward settlers.

Ahren should have no difficulty maintaining that friendliness. He has already presented prominent figures in the Israeli settler movement as cuddly figures.

Dani Dayan, a senior Israeli diplomat in New York, is a man of “charming outspokenness,” Ahren has written. Palestinians may be less familiar with that charm; they know Dayan from his previous role heading one of the main pressure groups for Israeli settlers.

Among the few criticisms that Ahren has offered about Israel’s top politicians in recent years was to point out that Benny Gantz, Israel’s defense minister, can stutter his words. Only someone with inexcusable prejudices could cast doubts on politicians based purely on how they have a speech impediment.

Tellingly, the piece about Gantz suggested that his “security credentials” compensate for any of his perceived weaknesses.

Ahren neglected to examine how Gantz established those “credentials” by committing crimes against humanity.

Gantz was Israel’s military chief during the 2014 offensive against Gaza. He has bragged of how all the killing and destruction he oversaw sent Gaza back to the “stone ages.”

Ahren’s erasure of unpleasant details should endear him to his new employers.

The EU’s embassy in Tel Aviv has previously recruited a man named Avishai Ivri to front its promotional videos.

A background check on Ivrii would have revealed that he has recommended massive slaughter. “Fuck it, wipe out Gaza,” Ivri tweeted at a time in 2012 when Israel was bombarding Palestinians.

Ahren is a little more restrained on Twitter. He uses social media for stenography purposes.

When government ministers spread the myth that Israel has “the most moral army in the world,” Ahren quotes them without offering the merest hint of skepticism.

Ahren has availed of the perks that come with being an Israeli reporter that the government respects.

He has accompanied Israeli leaders jetting into Arab countries with which they have recently “normalized” relations.

The junkets allowed him to combine stenography with sight-seeing.

With a high salary and attractive working conditions, Ahren should enjoy his new job.

Relations between the EU and Israel look set to become increasingly cordial in the near future. So he shouldn’t lose much sleep worrying about how to divert attention away from those “ostensible” violations of human rights.