by Gary Wilson, Struggle La Lucha, 05 January 2021. “Wall Street sets new highs to end 2020,” the Associated Press reported on Jan. 1, 2021. “Wall Street closed out a tumultuous year for stocks with more record highs on Thursday, a fitting coda to the market’s stunning comeback from its historic plunge in the early weeks of the coronavirus pandemic,” AP reported. 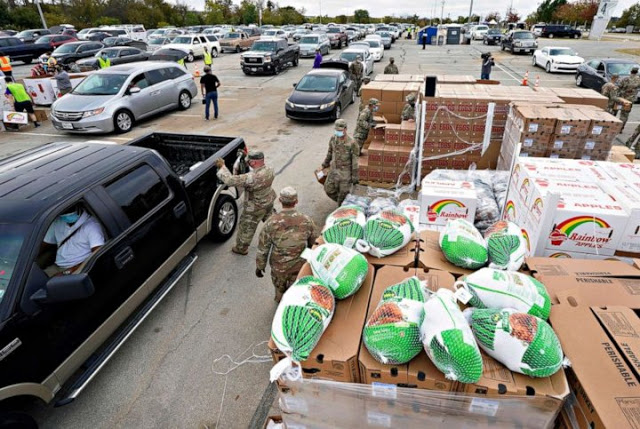 Look at the economy. Some 19.5 million workers are officially unemployed, four times as many as last year at this time. At least another 10 million are unemployed but not included in the official count. Jobs continue to be cut as rising coronavirus infections keep many people at home and state and local governments reimpose restrictions.

Over one-third of the adult population in the U.S. faces eviction or home foreclosure in the next two months according to new data from a U.S. Census Bureau survey. South Dakota, South Carolina, Georgia and Oregon have more than a half of all the households facing eviction or foreclosure.

In some states, food bank lines stretch for miles. Even before the pandemic hit, 13.7 million households, or 10.5% of all U.S. households, experienced food insecurity at some point during 2019, according to data from the U.S. Department of Agriculture. Convert household numbers to people numbers and you get 35 million who couldn’t get enough food. That number doubled during the last year, according to researchers at Northwestern University.

Tens of millions of working-class people have fallen into poverty and hunger or are near that edge. Stimulus money has mostly gone to big corporations. Over 160,000 small businesses have closed.

The rich got richer

Meanwhile, the richest 500 people on the planet added $1.8 trillion to their combined wealth in 2020, accumulating a total net worth of $7.6 trillion, according to the Bloomberg Billionaires Index.

Walmart and Target reported record sales. Amazon tripled its profits. Alphabet, Amazon, Apple, Facebook and Microsoft now make up 20% of the stock market’s total worth. The tech industry has achieved an unparalleled level of wealth and dominance.

So Wall Street is having a party.

With huge injections of credit by the Federal Reserve Bank at interest rates near zero, and the massive government stimulus payments to big business, the large corporations stockpiled the government-backed money, buying back their own shares or other financial assets. The stock market rocketed to an all-time high.

Wall Street’s rise is betting that the pandemic and mass unemployment, general poverty, hunger and homelessness will force workers to return to work at much lower wages. This will raise the ratio of unpaid to paid labor, leading to a higher rate of profit as business returns to normal.

Then Wall Street expects that dividends will rise and with it stock market prices. In anticipation of the good times they see coming — for the capitalists, that is — stock market speculators have bid up the prices of stocks.

In the 1920s after the end of the “Spanish” flu epidemic — it actually first appeared in the U.S. — the stock market shot up to new highs, much like what is happening now. Profit rises were even higher, as productivity substantially exceeded real wages. Wealth inequality soared to the greatest level ever seen, with 0.01% owning 25% of the total wealth in the U.S. That was an inequality level not seen since — until now. Some call it the return of the Roaring Twenties.

Of course, the Roaring Twenties ended with the Great Crash in the stock market of 1929-1930 and the ensuing Great Depression of the 1930s.

Inequality of wealth and income, poverty, homelessness and hunger rule the land while the stock market booms. That’s the current Roaring Twenties.