by Satya Sagar, CounterCurrents, 8 January 2021, A popular joke among leftists in the eighties was to ask why there had never been a military coup in Washington D.C. The answer: Because it doesn’t have a US embassy. This was an allusion to the nefarious US role in toppling legitimate governments around the globe, many of them violently. 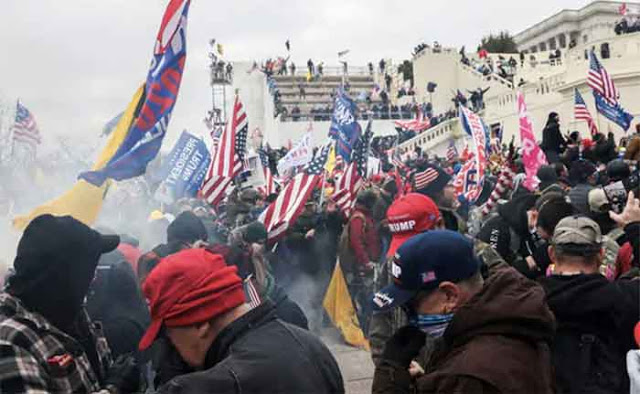 The storming of the US Capitol Hill on 6 January by a raggedy bunch of crazed Trump supporters[1], has to be seen in this context of the reckless vandalism that US imperialism has wrought upon rest of the world for decades. To call the brief occupation and trashing of the seat of US democracy an ‘attempted coup’ is a poor joke on nations that have suffered untold massacres at the hands of US-backed militaries and rightwing forces.

The power grab in Indonesia with US help by General Suharto back in 1967 followed by mass killings of over a million Indonesians accused of being communists was a genocidal coup. It was a bloody coup in 1973 when the CIA helped organize the ouster of elected Chilean President Salvador Allende to enable General Pinochet to takeover and establish a brutal dictatorship. Thousands were imprisoned and killed subsequently.

These are just two examples out of a very long list of US crimes overseas, spanning a period from the mid-nineteenth century to our own times and stretching from Asia and Africa to Latin America. The ‘shining city on a hill’, as Ronald Reagan once claimed American democracy to be, has more often been like an arsonist’s flaming torch for the democratic aspirations of people across the planet.

That is why, despite all the shock expressed by world leaders and many Americans themselves at the trashing of the US Congress premises, it is just a classic case of chickens coming home to roost – and that too a small fraction of the flock out there. It was also the result of the relentless feeding of the American public with lies about how ‘special’ their country was and racist propaganda about how ‘inferior’ the rest of the world was.

The point here is not in any way to belittle modern US democracy or its rules and traditions, which have been a trailblazer historically. The American revolution over two centuries ago, which overthrew British colonialism established the world’s first constitutional democracy. It inspired dozens of struggles for freedom and equality around the world, including the French and Russian revolutions.

“We hold these truths to be self-evident, that all men are created equal, that they are endowed by their Creator with certain unalienable Rights, that among these are Life, Liberty and the pursuit of Happiness” proclaims the US Declaration of Independence adopted in 1776. These poetic words still set the global standard for what all human societies should aspire for in their quest to balance the needs of operating a state for the common good while also ensuring individual rights of citizens.

As we all know however, poetry and the politics seldom go very well together and inevitably those in power find ways of filtering the ‘people’ out of the equations of governance.  In the US, despite the deep roots of democracy, all national policies and most aspects of public life have been steadily hijacked by special interest lobbies of various kinds.

The situation is, of course, far worse in countries with poor democratic traditions, where Constitutions have been reduced to mere paper weights and all institutions strayed from their original purpose. India is a stark example, where the party of Prime Minister Narendra Modi – a close buddy of Donald Trump-  has routinely subverted democratic principles to claw its way to power and hang on to it.

However this story of why democracies are in crisis everywhere today is not about good or bad leaders (one reason why Joe Biden won’t make much difference) as there are many structural reasons involved. Chief among these is the fact that modern industrial societies require the setting up of a complex state machinery to carry out the ‘mandate of the people’, but which becomes oppressive on its own. And at some point the fence not only ‘eats the crop’ but itself becomes captive to powerful vested interests – ideological, commercial or both.

And of all the lobbies competing for control none has been as ruthless or effective as the corporation – the most organised expression of the collective greed of faceless investors and shareholders in our times. Evolving almost in parallel with the modern state itself (remember the East India Company?) the ability of corporations to mobilise phenomenal amounts of capital influences state policies in a way unmatched by any other entity known to humankind.

In fact, one of the main factors responsible for the hollowing out of electoral or constitutional democracies is the way corporations operate like a ‘nation within a nation’– but without the public accountability that state agencies and institutions are formally subject to. Many corporations, with revenues larger than the GDP of entire countries, operate across international borders, cunningly bypassing national laws or policies inconvenient to their interests.

Today the concentration of wealth in multinational corporate entities is being paralleled by rise of ultra-high net worth individuals who are the monarchs of the new world economic order – above all national laws and jurisdictions. In 2018, 265,490 individuals held a wealth of 32.3 trillion USD[2], which is 12 times the GDP of a country like India, home to 1.3 billion people.

The concentration of such wealth, which is often directly translatable into political power – has made a mockery of all democratic institutions including the conduct of elections, media independence, the functioning of bureaucracies and impartiality of the judiciary.

So how can constitutional democracy be rescued from the clutches of such phenomenal money power? Taxation and regulation are two obvious ways recommended by many and also used by some countries to reign in large corporations but with limited success. In a globalised economy, corporations use a variety of means to evade scrutiny and accountability, especially the fact that every nation on Earth is competing with the other to provide shelter to the wealthy in the name of ‘attracting investment’.

There are no easy solutions given the sheer scale of the problem and the power of the forces involved. However, pretending the problem does not exist at all – as most mainstream political players and analysts routinely do – is simply not acceptable anymore, if democracy is to regain its original meaning as a form of government ‘by the people, for the people, of the people’.

The future of humanity lies in continuing in the traditions of the American, French and Russian revolutions to find newer and newer ways to decentralize power and create systems of governance that foster a just and dignified existence for all.

Satya Sagar is a journalist who can be reached at sagarnama@gmail.com

[1] I liked the bare bodied guy with the fur cap and painted face!