IYAD EL-BAGHDADI: ‘WE ARE IN A TIME OF COUNTER-REVOLUTION’

By Jan Peter Westad, New Internationalist, 7 January 2021. Iyad el-Baghdadi is a Palestinian
activist based in Oslo who became a key thinker for pro-democracy movements
during the Arab Spring. He speaks to Jan-Peter Westad about
fighting disinformation and living with threats from the murderous Saudi
regime. 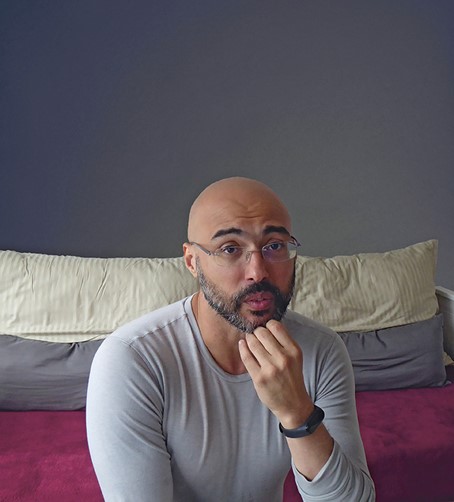 JW: At the start of the Arab Spring a decade ago you were working in tech start-ups; by the end you were
a prominent voice for the movement. How did this happen?

IB: The Arab Spring was a moment of awakening. Not just for me, but for an
entire generation. I grew up thinking we were not being ruled by a legitimate
order, that we deserved something better, more native and more representative
of us. But I never thought change and political agency would happen in my
lifetime. I thought the regimes were too entrenched. There was a sense that it
was impossible to bring about change without violence.

Then, at the
beginning of 2011, Hosni Mubarak was removed, a string of revolutions followed
across the entire region, and in May Osama bin Laden was killed. It felt like a
new page was being turned. The idea of violence had completely dissolved. For
years bin Laden had claimed he would destroy the [autocratic Arab] regimes and
only made them stronger.

One hundred
thousand people in the street achieved more in 18 days, without bloodshed, or
guns, or questionable moral actions. I decided I wouldn’t be able to look my
children in the eye if I didn’t stand up and make my voice count in this unique
moment.

I was in the
United Arab Emirates, so being at a protest was out of the question. I looked
around and assessed the need that most matched my abilities. There were a few
accounts on Twitter that were very influential and I felt this could be a
niche. My English was good. I had a background in media. So I decided to become
an English-language voice that could translate the events that were happening
in the Arab world. I started with speeches and news from the protests and went
from there.

JW: You soon
began talking about broader political ideas. What caused this shift?

IB: When I realized that this movement had the potential to enact real change,
my attention shifted from individual countries to the entire region, and then
to the realm of ideas. I realized that if we knocked down the wall of these
dictatorships, we would find a total vacuum. To be a success, we had to build a
realistic alternative.

I started to
compare different political ideologies to find what had been imposed upon us,
what was native and what was universal. I prepared an Arab Spring Manifesto and
an Arab Tyrant Manual, which were designed to support any activists fighting
authoritarianism. In my mind, the best solution is a small government and an
activist society that steps in to take over spaces that the state has crept
into. This, of course, reflects my own background as a Palestinian refugee,
someone who has never had a state to rely on.

I realized that if we knocked down the wall of these dictatorships, we
would find a total vacuum. To be a success, we had to build a realistic
alternative

JW: Eventually,
the Arab Spring fell apart and many regimes have since reasserted themselves.
The idea of violent opposition has returned with ISIS. What is the state of the
Arab democracy movement today?

IB: Now we are in a time of counter-revolution. Our backs are to the
wall. But there is a network of activists who came together during that period,
mostly online, which still exists. We have to be more strategic, but our job is
the same. We have to show exactly how the current regimes lack legitimacy and
offer clear and complete alternatives for the future.

JW: A large part
of this battle for legitimacy takes place online. With the rise of
disinformation, is the internet still the same platform for free and radical
political expression it seemed during the Arab Spring?

IB: Yes. Twitter remains a forum for Arabic speakers where we can wear
away at the rusty narratives of the dictators. This is something the dictators
recognize. I was exiled from the UAE in 2014 because they could not accept my
Twitter activity. With the rise of Mohammed bin Salman [MBS] in 2016, you
have seen Saudi Arabia, in particular, resort to the Russian model of
disinformation. They are invested in corrupting the public sphere on the
internet because they see it’s important. Mohammed bin Salman lives on
Twitter.

JW: Your analysis
of disinformation bots helped reveal Saudi attempts to hack the phone of Jeff
Bezos. This led to a threat on your life from Saudi Arabia, revealed to you in
May last year. Has that changed your approach to your work?

IB: I live apart from my wife and two-year-old son. I’ve installed
careful routines to stay safe and learned long ago to take each day at a time.
But I don’t want to make myself seem too important. MBS does not care about me
personally. His main objective, the thing he thinks about every day and night,
is his family. He is a tribal Saudi thug whose ambition is to vanquish the rest
of his family. That’s his first concern.

He cared about
the Bezos hack because he wants to have an international reputation. And I’m
this little nuisance who screwed that up for him. I’m not a target because I
criticized him, but because I hit him where it hurts.

JW: Why have you
chosen to focus on Saudi Arabia and Mohammed bin Salman?

IB: The reason was not because of MBS personally, or because of Saudi
Arabia, but because he best represents the model of the benevolent, reforming
dictator, and we have to crush that model. We need to prove to the world that
there is no such thing. That they are not the answer. We were ruled for decades
by so-called ‘liberal autocrats’. That’s what Egypt’s Hosni Mubarak was called.
That’s what Tunisia’s Ben Ali was called.

With the murder
of my friend [dissident Saudi Arabian journalist] Jamal Khashoggi, I started to
believe MBS could be the actor who kills this myth so often put forward by the
West. If after MBS, it becomes impossible to look at any autocrats and say they
are liberal reformers, I will be proud to have played a role in finally sinking
that idea.