by Nora Barrows-Friedman, Electronic Intifada, 15 January 2021. Leaders of major Israel advocacy groups in the US are calling on the incoming Biden administration to further suppress Palestinian rights activism on college campuses. In a letter, sent on 12 January, they make no mention of the events six days prior when anti-Semitic extremists, white nationalists and other Trump supporters attacked the US Capitol Building. 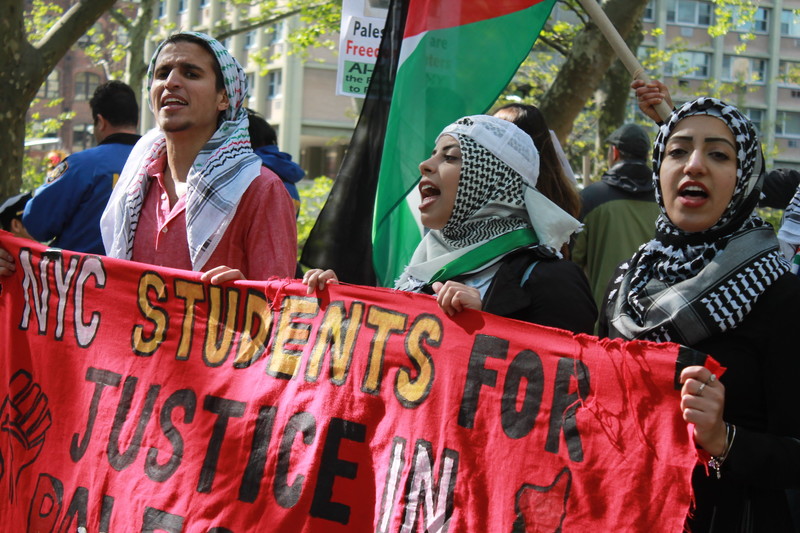 Israel lobby groups are counting on the Biden administration to continue advancing their agenda to shield Israel from criticism. (Joe Catron)

Rather, the heads of the Anti-Defamation League, the Jewish Federations of North America, the American Jewish Committee and others representing dozens of members of the Conference of Presidents of Major Jewish Organizations, praise the current and two former administrations and claim that “some anti-Israel activity is simply a modern form of anti-Semitism” – pointing squarely to Palestine solidarity activism on college campuses.

For their part, some of these same organizational leaders had separately expressed their dismay and horror at the blatant anti-Semites and their ilk who took part in the 6 January attack.

Attempting to shield Israel from criticism, lobby organizations have for years shifted the blame for violent acts of anti-Semitism by white supremacists toward defenders of Palestinian rights instead.

The habitual claim that the Palestine solidarity movement, particularly at universities, is a hotbed of anti-Semitism paved the way for the executive order issued by President Donald Trump in December 2019.

The Conference of Presidents urge the Biden White House to “maintain and build upon” the recognition by the last three Presidents that “anti-Semitism on college campuses is a serious problem.”

But the claim that rampant anti-Jewish bigotry is related to college Palestine solidarity activism bears no proof, according to the Anti-Defamation League itself.

Still, Israel lobby groups continue to use these assertions in order to advance their agenda.

The Conference of Presidents offer their help to the incoming administration to implement the IHRA definition of anti-Semitism.

Additionally, they claim that the plan to implement the IHRA definition through the Anti-Semitism Awareness Act, enjoys “widespread bipartisan support” in Congress.

Though that legislation has been stalled since 2018 amid free speech concerns, the former head of the Department of Education’s Office for Civil Rights, Israel lobbyist Kenneth Marcus, unilaterally and extra-legally adopted the IHRA as policy in order to charge Palestine rights activists with ethnic discrimination against Jewish students.

Marcus’ move was a gift to Israel lobby groups that had been pushing the US government to use the definition to shield Israel from criticism on college campuses.

On Thursday, the Democratic Majority for Israel, the US Congress’ in-house lobby, echoed the calls for the Biden administration to adopt the IHRA definition.

The lawmakers’ group claimed that critics of the IHRA definition “are simply wrong on the facts,” adding that European countries that have already adopted the definition have not become “hotbeds of anti-speech activity.”

Here, DMFI overlooks the recent policies passed in Germany and France – two countries it cites – that have openly infringed on the rights of their citizens to criticize Israel and participate in the boycott, divestment and sanctions (BDS) campaign for Palestinian rights.

Jewish Voice for Peace called the Conference of Presidents’ letter “shameful.” The group has also set up an online petition to counter-pressure Biden, urging him to reject the IHRA definition.

Admonishing the letter, Yonah Lieberman of the progressive Jewish group IfNotNow said: “Generations of Jews will look back at the failure of these men to meaningfully fight anti-Semitism.”