Islamophobia and Amnesia: Why are Major White Supremacist attacks on Mosques quickly Forgotten?

by Jasmin Zine, The Conversation, 30 January 2021. On Jan. 29, 2017, six Muslim men were shot dead in a Québec City mosque. An armed white nationalist terrorist went on a shooting rampage in the Islamic Cultural Centre in Sainte-Foy, Québec, just after evening prayers. It remains the worst mass murder in a house of worship in Canada’s history. 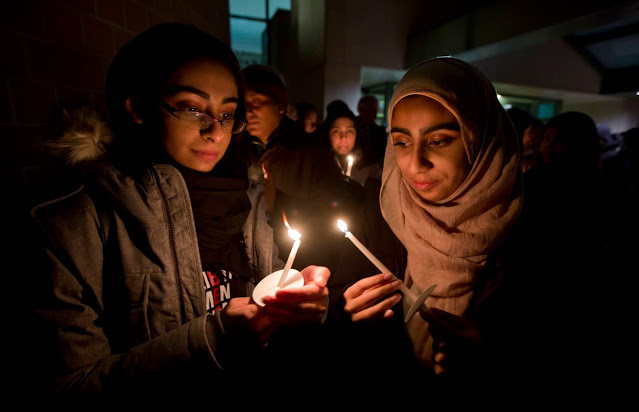 A halal grocery store owner, a professor at Université Laval, three civil servants and a pharmacy worker were slain by Alexandre Bissonnette. These men originally came from Morocco, Algeria and Guinea. The murder victims were: Ibrahima Barry, 39; Mamadou Tanou Barry, 42; Khaled Belkacemi, 60; Aboubaker Thabti, 44; Abdelkrim Hassane, 41; and Azzedine Soufiane; 57. Nineteen other worshippers were injured, including Aymen Derbali, who was paralyzed in an attempt to stop Bissonnette.

The federal government has now announced that Jan. 29 will become a National Day of Remembrance for the victims of the mosque attack and that it will be used to promote action against Islamophobia.

Bissonnette had browsed websites linked to white nationalist ideologues. He also made more than 800 online searches of U.S. President Donald Trump. Bissonnette later confessed to police that he had been motivated by Prime Minister Justin Trudeau’s message of welcome to refugees following Trump’s travel ban on seven Muslim-majority countries.

Bissonnette was sentenced to 40 years with no parole. The sentence angered Québec’s Muslim community, which sought a harsher penalty. The Québec Court of Appeal recently ruled that Bissonnette’s sentence violated Canada’s Charter of Rights and Freedoms and would subject him to “cruel and unusual” punishment. He will now be eligible for parole in 25 years.

The court’s decision prioritized the rights of the perpetrator over justice for the victims, adding further insult to injury.

The documentary “The Mosque: A Community’s Struggle” shares the stories of the survivors, victim’s families and the local community. Some of those interviewed spoke of how they felt “forgotten,” especially by the government and politicians, in the aftermath of this tragedy. This unprecedented act of violence has fallen prey to wilful forgetting and national amnesia rather than being a part of our collective remembrance and commemoration as a nation.

Using the hashtag #IRememberJanuary29, the Canadian Muslim Forum (FMC-CMF) and Canadians for Peace and Justice in the Middle East (CJPME) launched a campaign for the federal government to recognize Jan. 29 as a National Day of Remembrance and Action on Islamophobia and other forms of religious discrimination. In addition, more than 70 Muslim organizations and dozens of community partners called upon the federal government to commemorate the attack.

Québec Premier François Legault rejected a proposal to have Jan. 29 declared a Day of Action Against Islamophobia, saying there was “no Islamophobia in Québec.” He later backtracked by qualifying that discrimination exists but is not widespread. Statistics Canada found that hate crimes against Muslims in Québec tripled to 117 in 2017 from 41 in 2016.

Canada officially designated Dec. 6 the National Day of Remembrance and Action on Violence Against Women to commemorate the murders of 14 young women at Polytechnique Montréal on Dec. 6, 1989. The day has become an important part of our collective memory as a nation.

It took four years for the federal government to commemorate this tragedy and address the Islamophobia that led to it.

The lack of support for commemorating the mosque massacre was underscored by negative public attitudes toward Canadian Muslims. A 2017 poll revealed that 46 per cent of Canadians held unfavourable views of Islam as compared to other faiths.

A Radio-Canada poll that coincided with the mosque attack found 23 per cent of Canadians favoured a ban on Muslim immigration. The level of support rose to 32 per cent in Québec.

In the aftermath of the Québec mosque attack, Liberal MP Iqra Khalid tabled Motion 103, calling on the government to address systemic racism and religious discrimination. This proposal was met with virulent Islamophobic rhetoric and hate. A parliamentary committee held hearings on the motion and wrote a report in response.

The report makes 30 recommendations, and only two of these reference Islamophobia. The report did recommend a national day of remembrance, yet it largely remains silent on specific action against anti-Muslim racism. A 2018 survey found that more than half of Canadians acknowledge that Islamophobia is “an increasingly disturbing problem in Canada.” Sixty per cent agreed that the government “must take action to combat Islamophobia” in Canada.

Last year, Québec City inaugurated a memorial entitled “Vivre Ensemble” in honour of the victims of the mosque shooting. The monument, located near the Islamic Cultural Centre of Québec in the city’s Ste-Foy district, includes the names of the six murdered men and is adorned with intricately patterned aluminium leaves inspired by their countries of origin.

This poignant tribute is an important site for healing and reflection upon this tragedy and the Islamophobia that led to it.

Commemorating the Québec mosque massacre with a national day of remembrance ensures that we will not forget the lives that were lost and the communities that are affected by this violence.