Fascist violence and the form of the state

by Sam Marcy, La Lucha, 7 January 2021. Below is an excerpt from an article by Sam Marcy, a leading Marxist thinker and fighter of the second half of the 20th century. It was written shortly after Ronald Reagan’s inauguration in 1981 — that is, at the beginning of the long period of reaction that is peaking today. 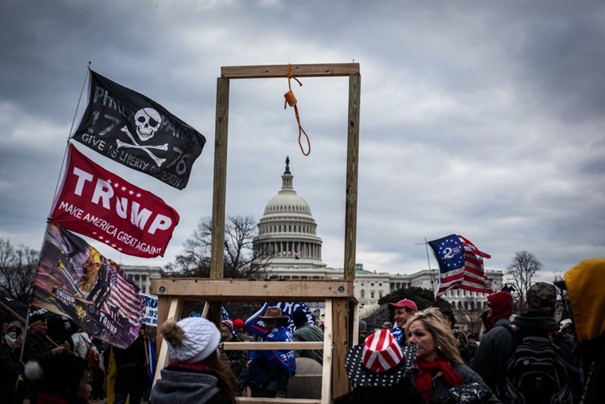 A noose is erected by supporters of President Donald Trump on the West side of the Capitol in Washington, DC, on January 6, 2021.

Marcy argues for the importance of Marxist clarity on the difference between violence by the bourgeois-democratic state, however brutal, and that of fascist organizations, “particularly when they are armed and supported materially by right-wing, disaffected, but powerful elements of the ruling capitalist establishment, constitute a threatening parallel form to the legal (bourgeois-democratic) capitalist state.”

What is completely left out of consideration is that the spread of fascist organizations takes place in a vastly different, if not wholly new, social, political, and economic situation. The entire social environment in which the spread of this evil disease takes place imparts to it a significance which far surpasses the numerical strength of these organizations.

It is this which adds a really new dimension to the perilous growth of this virulent disease. Fascist violence has been endemic to the maintenance of the domination of the ruling class in the U.S. for a number of decades. It is, however, exceptionally important to distinguish between the violence which emanates directly and openly from the capitalist state, and the extra-legal, extra-governmental violence of fascist organizations.

The capitalist state is itself, of course, the main generator of force and violence. In its role as an instrument of capitalist domination over the working class and the oppressed, it operates as an organ of suppression in order to maintain and secure its rule over the masses.

Differentiate between government and extra-legal violence

Violence practiced upon the working class and the oppressed is therefore a concomitant element of the rule of the oppressing and exploiting bourgeoisie. Notwithstanding the viciousness, ferociousness or magnitude of the violence which the ruling class visits upon the oppressed, it must nevertheless be considered as violence within the framework of the bourgeois legal (“democratic”) system.

Such violence must be differentiated from, and not be confused with, the extra-legal, extra-governmental violence which is the essential characteristic of fascist organizations of the type under discussion. It is, of course, absolutely true that both legal and extra-legal violence have coexisted along with the bourgeois state since the very inception of the state itself.

In the U.S., legal and extra-legal violence have existed side-by-side for longer than a century. Ku Klux Klan violence is a principal example of how extra-legal violence visited upon the oppressed masses coexists with the legal forms of the capitalist state, and how one promotes the other.

Anti-labor violence employed on a huge scale for many decades by individual employers and industries has been of an extra-legal character. Most particularly noteworthy are strike-breaking organizations and the employment of underworld mobsters. “Right-to-work,” open-shop states are frequently the very same states which have either clandestinely or openly supported the Klan.

The pogroms visited upon oppressed nationalities in Czarst Russia are another example of how extra-legal forms of violence are carried out alongside with and encouraged and promoted by the legally constituted government. Pogrom violence in old Russia didn’t differ much from the massacres carried out by the Night Riders in the U.S.

Every capitalist state tolerates and occasionally promotes this sort of extra-legal violence. The difference, however, between fascist violence and other forms of illegal violence practiced by the government should be made clear.

For example, police brutality is frequently as vicious and as violent as that carried out by the fascists, and on occasion goes beyond legal limits (usually characterized by the bourgeois press as “excessive”). The two should not be confused even though the police may, and often do, collaborate with the Klan, neo-Nazis and other fascist and neo-fascist organizations.

Fascist organizations in their embryonic form, particularly when they are armed and supported materially by right-wing, disaffected, but powerful elements of the ruling capitalist establishment, constitute a threatening parallel form to the legal (bourgeois-democratic) capitalist state.

Such a situation can only exist in periods of extraordinarily acute social crisis when the capitalist state is so torn by accumulating inner contradictions and weakened by its inability to overcome its social crisis that it inevitably gives way to extra-parliamentary, extra-legal forms of rule.