Cuba’s revolution continues during the pandemic

By Minnie
Bruce Pratt, 7 January 2021, During the first week of January, Cubans
celebrated the 62nd anniversary of their great Revolution, marking the day when
Fidel Castro, Che Guevara, Camilo Cienfuegos and the revolutionary forces
entered Havana and ousted the U.S.-backed dictator Fulgencio Batista. Since the
victory in 1959, Cuba has resisted attack after attack by U.S. imperialism and
still continues on its road toward socialism. 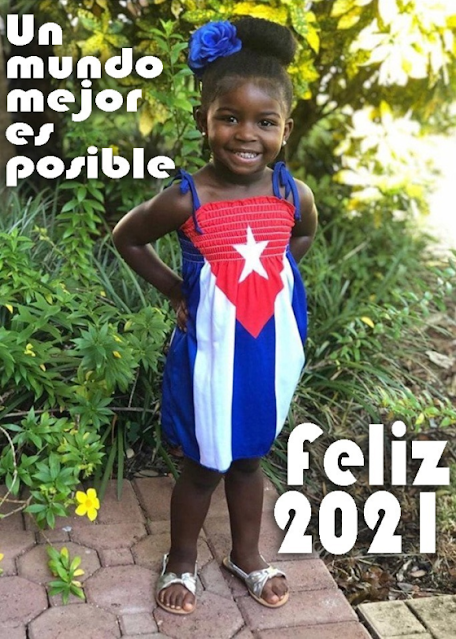 “A
better world is possible. Happy 2021!” says this child of the Cuban Revolution.

Get energized
to take action to support that revolution by watching “Don’t Mess with Cuba (No
Te Metas),” documenting the unbreakable determination of Cuba’s people to
defend their national sovereignty.

In this just
released video, hundreds of Cuban singers, dancers, actors and other cultural
figures rap, “Whoever wants the truth, let them come and see” and “ My
beautiful country, my flag and my identity are to be respected!”

And if the U.S.
does not? Then, they sing: “We know not fear, so don’t try to work that angle!”
They will be like “the Mambi warriors still wielding the machete” — the
guerrilla soldiers of African, Chinese, Indigenous and Spanish descent who
fought for Cuba’s independence from Spanish colonialism in the 19th century.

The
English-subtitled video is available on Facebook through the Cuban Institute of
Friendship with the People at tinyurl.com/ya5wydkj.

Cuba’s many
revolutionary accomplishments include building one of the world’s most
effective primary health care systems. Cuba leads the globe in the lowest
patient-per-doctor ratio and has one of the world’s highest life expectancies,
77 years. (tinyurl.com/ktu7ot4)

Cuba has two
vaccines against the coronavirus in clinical trial, leading South America and
the Caribbean in vaccine development. The revolutionary country promises to be
a potential supplier to neighboring countries and to poor, remote or Indigenous
communities who would struggle to access the high-priced medicines of
capitalism. (tinyurl.com/y7fuuxuk)

The late
revolutionary leader, President Fidel Castro, supported Cuban biotech
development in the 1980s, in part because the U.S. trade blockade of the island
cut off access to medical supplies and innovations. Since then, biotech has
become a major part of the country’s economy.

The U.S.
blockade continues in force to this day, despite the global pandemic.

Cuba is
committed to solidarity with all countries struggling to maintain independence
from imperialist domination. Its government shared the country’s important
developments in coronavirus response as the pandemic descended on the world.
More than 45 countries have requested Cuba’s Interferon Alpha 2B protocol to
use in COVID-19 treatment. (Workers World, Aug. 25)

In 2005, Cuba
established the Henry Reeve International Medical Brigade to aid victims of
Hurricane Katrina in the U.S., although Washington rejected that aid. Now,
during the pandemic, Cuba has sent 53 contingents of health workers from the
Henry Reeve Brigade to over 40 countries, in addition to the Cuban medical
personnel who were already working in 58 countries. (Granma, Nov. 23)

Scores of
peace, justice, medical and solidarity organizations have nominated — and
thousands of individuals have endorsed — Cuba’s Henry Reeve Brigade for the
2021 Nobel Peace Prize for its unprecedented contributions to the health of the
world’s peoples. They hail Cuba’s “selfless humanitarian work saving lives and
promoting friendship and cooperation among nations,” especially during the
pandemic. (tinyurl.com/ya7vz3fg)