The post-viral world – our world?

by Milena Rampoldi, ProMosaik, 15.04.2020. The current virus-related isolation and segregation lead people to self-reflection and to a contemplation about their own life. Even those who deal with the crisis a little less hysterically and switch out the roaring media for a few hours because they have a dynamic and responsive approach to life, react to the environment and find survival strategies, occasionally leave the terrain of dynamism and contemplate about the meaning of life, the meaning of the world, human relationships and politics. 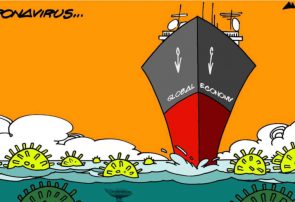 Regardless of their ideology, religious affiliation and attitude to life, this certainly applies to people worldwide in all cultures and traditions. For this reason, we should consider this thinking, acting, reflecting and reacting as a human phenomenon without bringing it into a national framework. It is not the nations which develop utopias and survival strategies, but the individuals all over the world. Since people have always been living in communities, with each other and for each other. The nations were not invented until much later. And these invented nations pursued the main objective of promoting mutual against-one-another through mutual exclusion and national isolation.
As Aristotle put it, the human being is made to live his life as an “animal living in society”. The human being is an open-minded being. It opens towards the fellow human beings, by entering into intimate, family, friendship, social and political relationships. As a consequence, human acting is a socio-politically focused acting. Even the lack of engagement in society and politics is a socio-political attitude, albeit to be understood in a negative sense.
The virus, or rather the measures taken by the States in which we live, forces us to live in a horizontal segregation keeping us distanced from our fellow human beings. We bridge this segregation by developing innovating strategies in the field of virtual communication. In doing so, what we forget is that the human being is a material, physical being.
In this context, the French philosopher Maurice Merleau-Ponty speaks of physical existence. In this sense, the body is the place of human foundation in the world as a space of socio-political relationships. And in this bodily existence the soul of the human being, the urge for infinity and the potential for utopian thinking are located.
If we activate these aspects now and try to imagine what the world will look like after this virus pandemic, we will directly understand the need to shape this world after the virus by anticipating positive and constructive changes from now. And a big change concerns overcoming the capitalist system of insecurity, precariousness, exclusion and classification of people according to the capitalist standards of meritocracy and capital accumulation.
We have long been no longer in the area of virology, but in the field of capitalist strategies to contain the virus with the consequent destruction of capital in the context of a global recession that capitalism itself creates by taking this kind of emergency measures.
People are deprived of their obligation to work. Millions of people who are considered socially weak in capitalism are prevented from their self-compulsion to go to work to make their living. And this happens worldwide. We have not to look at the whole picture only in the context of a Eurocentric welfare state idea in which capitalism is corrected and people are supported by the state ensuring their survival. People subjected to horizontal segregation are deprived of their survival strategies.
The weakest of the society are relegated to horizontal segregation or, at best, to social distancing, which is impossible in most societies because people are too attached to the community and do not perceive this distance, or because they have no house to comply with the imperative of the nation imposing them to hide away in their house until the nation will have curbed the pandemic.
All over the world, the coercive measures are multiplying. Imprisoned in their homes, whether villas or corrugated iron huts, the people think of the world after the Covid 19 virus break, in order to get out of this world of oppression, restriction, poverty if they are poor, or to be offered the capitalist chance to re-pile up the vanished capital if they are rich.
However, the first category, that is, the majority of all people living worldwide, then wake up without the virus in a post-viral capitalist world oppressing and excluding them once again.
My solution to the problem: Let us change the world before it’s too late and let’s start thinking about an alternative to the current dominant capitalist model. Let us think of a model reflecting on the material conditions worldwide and saying: We need material security; we need resources for everybody to maintain a forum for utopia in all social classes.
Since philosophy, utopia and thinking should not remain the privilege of the elect. I do not want the statement Georg Büchner puts into “Woyzeck’s” mouth still applies after the end of this pandemic and that we will still hear the following from the voice of the people impoverished by capitalism saying: ”We, the poor people. Look, captain, money, money. Who has no money.  So, somebody’s like me has no morality in this world…”, since thought and reflection must not be withheld from the masses. And the same applies to the elaboration of strategies leading us from capitalism to a fairer, more social-oriented system.