April 17, 2020February 23, 2021 by Milena Rampoldi
von German Foreign Policy, 16 April 2020, English Translation by Milena Rampoldi, ProMosaik. In view of the outbreak of the Covid-19 pandemic, the German media are stepping up their blame on China by moving to openly ask for compensation. The People’s Republic “has caused the pandemic”, this is what the mainstream media repeatedly say. And the Springer press insists on “compensation” by headlining “What China already owes us”. 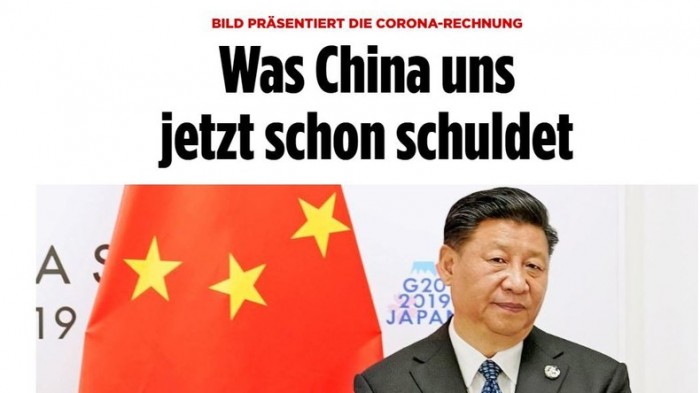 The agitation began when it became apparent that the People’s Republic of China was able to overcome the crisis more lightly than the Western powers and their global rise are likely to continue, while the transatlantic states are in danger of being thrown back by their totally inadequate preparation for the pandemic. The claims are accompanied by a massive anti-Chinese sentiment; just to make an example, it is currently stated that Peking follows a “strategy of unrestricted warfare”, already formulated by the Chinese military a good two decades ago. The statement is not correct, but it is similar to claims based on lies used against Russia for years.
The Failure of the EU
The beginning of the most recent wave of anti-Chinese sentiment in Germany can be dated around mid-March. At that time, the first Covid 19 deaths were registered in the Federal Republic of Germany; it became apparent that strict restrictions in public life, which had previously been considered inadequate for the so called “free world”, were inevitable at that point. Furthermore, the Berlin export ban for medical protective equipment resulted in violent protests, especially in Italy. The fact that Rome received aid deliveries from China, but not from any other EU country, relentlessly exposed the real nature of the alleged “European solidarity” Berlin is fond of.[1] It showed as well that the People’s Republic of China was capable of containing the Covid-19 virus while the EU was not able to prevent the pandemic centre from moving to Europe – not least due to its catastrophic preparation for the approaching pandemic, still apparent today if we look at the serious lack of medical protective equipment. As reaction to its own failure – as well as to distract from this failure – the public attacks against China increased in Germany as well as in other European countries. It was affirmed, for example, that the People’s Republic of China – as the scene of the pandemic outbreak – was the real “cause of the crisis”.[2] The EU’s foreign representative, Josep Borrell, officially declared a “battle of narratives” against Peking (see the respective report on german-foreign-policy.com [3]).
Unprecedented demands
Since then, the claim that China is “the cause of the crisis and/or of the pandemic” has been repeated regularly. In addition, now there are explicit compensation claims against China for the pandemic it has supposedly caused. Already on 30 March the newspaper “Bild” owned by Springer asked: “Must China pay damages to the affected countries?”. This Wednesday the same newspaper moved a step further by saying: “What China already owes us”.[4] However, the demand is by no means limited to the right-wing tabloid press. Recently, the alternative German online magazine “Telepolis” stated that “It should be the legitimate concern of all countries to hold China accountable” since the one “bringing so much misfortune to the world, has to bear the resulting consequences. The bill goes to China.”[5] The demand for a compensation payment addressed to a country for a natural disaster or a pandemic is not only unprecedented; furthermore, it is remarkable in a country like Germany that up to now has not even paid any compensation for many mass crimes committed during the second World War I as well as for its colonial massacres, including numerous massacres in China itself.[6]

“Li Hong Zhang, think it twice
don’t make us Germans angry
’cause we Germans we can’t
take a joke, you will see!”

Suspicions and double standards
In the context of the swelling accusations against China, the leading German media – including those which pretend to be “quality media” – resort to classic mood-making techniques, such as double standards or non-proven suspicions. For example, the following reproach is expressed, while the involvement of the Federal Army Bundeswehr in the fight against the Covid 19 pandemic [7] is praised: “When the diffusion of corona really began in China, the struggle against the virus got a military aspect.”[8] A leading daily newspaper, which has a lot of understanding for the pressure of German business representatives to end the shutdown despite the associated health risks, accuses China because “the companies” could run out of money, and as a consequence, “the health of the workforce should not … stop the operation.”[9] While it is taken for granted that the Western powers have a very significant influence in international organizations, about China’s efforts to expand its position in line with its new economic and political strength it says that “Peking is undermining the international community”.[10] About two successful Chinese projects, the New Silk Road and the Huawei group, the following is stated suggestively: “China is building connections with the Western world. And these connections could have back doors.”[11] The allegations are totally unconfirmed; the company Huawei is said to support Chinese espionage operations; however, the only proven fact is that the US secret services researched the Chinese international company comprehensively years ago, without, of course, having discovered even the slightest reference to connections between Huawei and the Chinese secret services (see the respective report on german-foreign-policy.com [12]). Repeating unproven suspicions again and again is a typical characteristic of fake news.
“Unrestricted Warfare”
The anti-Chinese agitation is currently reaching a certain low with the following statement according to which the “Chinese Communist Party” has not only brought the current “pandemic over the world”, but also follows a “strategy of unrestricted warfare” against the Western world. Furthermore, it says that this warfare was designed by two officers “over twenty years ago”.[13] This is claimed by the newspaper portal “Zeit Online” in a series entitled “Lu explains China”. According to this series, the People’s Republic of China is not just conventionally upgrading its military; according to the mentioned strategy, as outlined in the book “Unrestricted Warfare” published in 1999, it could “transform all into a weapon and a battlefield”: “Information technology, public opinion, trade, finance … etc.”, as well as a “simple contract concerning the creation of a mobile network”. According to the “strategy of the unrestricted warfare”, China actually uses all conceivable means as battle instrument to struggle against the Western world. The “Chinese conception” of the “waging war without borders” is “a ticking time bomb for the international relations”.

“Trying to Understand the Threats”
In fact, the book “Unrestricted Warfare”, written by the officers Qiao Liang and Wang Xiangsui, is not a combat guide for the People’s Republic of China, but an analysis of the global power struggles in the 1990s. According to the said analysis, generally speaking, the current wars are not only waged with military means, but also, for example, as economic or financial wars; the authors refer to the Asian crisis of 1997, in which speculators could seriously damage foreign countries by targeted manipulations. Today, war is waged by using various means, from the traditional psychological warfare to the media used to oppose to an enemy and to the targeted use of economic aid. The states, including the states of the Western world, do no longer use only guns “to force the enemy to submit to their will”; but they make “use of all means, including armed and non-armed violence, military and non-military, lethal and non-lethal means to force the enemy to comply with their interests”.[14] By taking into consideration the analytic character of this book, in The British Army Review, for example, it says that the book was not a “manifesto to attack the West”, but an “attempt made by Chinese officers in an emerging military to understand the threats they were facing”.[15]

The Non-Existing Doctrine
However, the distorted portrayal of the “Unrestricted Warfare”, trying to portray China as a very aggressive, underhanded force, has its precedents. In July 2014, the Russia specialist from the USA, Mark Galeotti, coined the catchphrase “Gerassimow Doctrine” having a similar impact direction. According to this “theory”, the Russian chief of staff, Waleri Gerassimov, in a speech held in early 2013, would have developed a plan to fight an enemy in a so called “hybrid war” – by influencing the opposing public by social media and other non-military means. The alleged “Gerassimow doctrine” has been cited many times in the leading German media to prove the Russian aggression plans. However, in reality, Gerassimow had only described the Western influence operations organised before 2013 by analysing them without asking for a similar approach from the Russian side (see the report by german-foreign-policy.com [16]). Galeotti was mockingly ridiculed by experts. In the meantime, he distanced himself from the alleged “Gerassimow doctrine” by saying that as he told in the magazine Foreign Policy he had been “the first one writing about the notorious Russian high-tech military strategy”; however, he added that there was only “a little problem with this strategy: The doctrine does not exist at all.”[17]
Ways of Country Stigmatisation
Nevertheless, the invented doctrine is not only positioned against Moscow to this day, such as this week in the New York Times.[18] It has especially supported the consolidation of a negative image of Russia in the West. Something similar may now be imminent for the Western image of China, with the “Unrestricted Warfare”. And as it was the case for the “Gerassimow Doctrine” also the doctrine about China is a complete reversal of the content.
Notes
[1] About it, see Die Solidarität der EU and Die Solidarität der EU (II).
[2] Friederike Böge, Stephan Löwenstein, Michael Martens, Matthias Rüb: Vom Verursacher der Krise zum Retter in der Not? Frankfurter Allgemeine Zeitung 18.03.2020. Gloria Geyer: Wie sich China in der Corona-Krise Einfluss in Europa sichert. tagesspiegel.de 19.03.2020. About it, see Annahme verweigert.
[3] The Coronavirus pandemic and the new world it is creating. eeas.europa.eu 23.03.2020. About it, see Die neuen globalen Gesundheitsmächte.
[4] Muss China betroffenen Staaten Schadensersatz zahlen? bild.de 30.03.2020. Was China uns jetzt schon schuldet. bild.de 15.04.2020.
[5] Wieland Giebel: Für die Coronavirus-Pandemie ist die KP-China verantwortlich. heise.de/tp 06.04.2020.
[6] About it, see Die Lehren der Geschichte (I) and Die Lehren der Geschichte (II).
[7] About it, see Die Grenzen des Machbaren.
[8] Caption, in: Franka Lu: Dieses Schlachtfeld hat keine Grenzen. zeit.de 13.04.2020.
[9] Hendrik Ankenbrand: Wie China seine Wirtschaft wieder hochfährt. Frankfurter Allgemeine Zeitung 08.04.2020.
[10] Marcel Grzanna: Peking unterwandert die Staatengemeinschaft. n-tv.de 12.04.2020.
[11] Caption, in: Franka Lu: Dieses Schlachtfeld hat keine Grenzen. zeit.de 13.04.2020.
[12] About it, see Spionage bei 5G (II).
[13] Franka Lu: Dieses Schlachtfeld hat keine Grenzen. zeit.de 13.04.2020.
[14] Qiao Liang, Wang Xiangsui: Unrestricted Warfare. Translated by the Foreign Broadcast Information Service (FBIS).
[15] John P. Sullivan: Unrestricted Warfare – Colonel Qiao Liang and Colonel Wang Xiangsui. In: The British Army Review. no. 147, summer 2009. p. 152-154
[16] About it, see Äußere und innere Feinde.
[17] Mark Galeotti: I’m sorry for Creating the “Gerasimov Doctrine”. foreignpolicy.com 05.03.2018.