Von Milena Rampoldi, ProMosaik. 20. Februar 2020. BBC.
The shooting dead of nine people in shisha bars in Hanau is being treated by German investigators as an act of far-right terrorism. 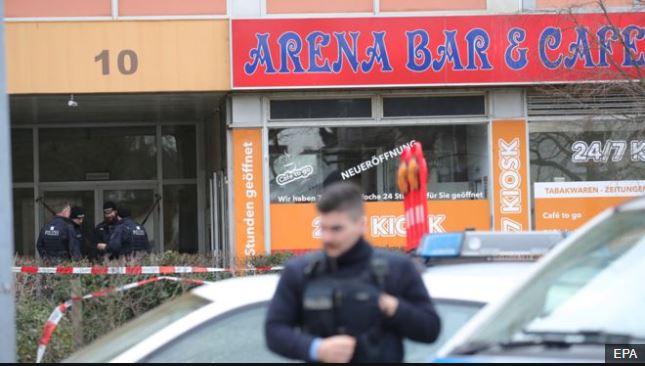 The attack has shocked Germany and added to fears that police may still be missing vital clues about violent racists and their networks, despite previous far-right outrages.
The ability of violent racists to remain for long periods below the police radar was exposed in the National Socialist Underground (NSU) case. A neo-Nazi cell murdered 10 people, nine of them immigrants, between 2000 and 2007, while police failed to connect the attacks.
The NSU case was a wake-up call for the authorities, whose anti-terrorism efforts had been focused on the threat from violent Islamists.
But some now accuse the authorities of still underestimating the far-right terror threat.


The Hanau suspect has been named as Tobias R. The 43-year-old has been described as a lone gunman, and was found dead later at home next to his dead mother. He was a licensed gun owner and had not been under investigation previously.
The attack has reignited a debate in Germany about the extent to which far-right rhetoric may be encouraging racist violence.

The far-right Alternative for Germany (AfD) – now the main opposition party – has been accused repeatedly of using inflammatory rhetoric, including in parliament.
Support for the AfD swelled after nearly a million non-EU migrants reached Germany in 2015 – portrayed by nationalists as an Islamic threat to German culture.
The head of the Social Democrats (SPD), Saskia Esken, described the Hanau crime as far-right “terror” and said “for far too long we’ve avoided naming this in clear language”.
AfD parliamentary leader Alice Weidel condemned the Hanau attack as a “terrible act”.
But Björn Höcke, one of the AfD’s most controversial politicians, has used language echoing racist conspiracy theories spread by neo-Nazis, including the “great replacement” – the claim that Jews and liberals want “inferior” races to replace the white race.
He has also spoken of “remigration” – the racist idea of forcing non-whites to leave, because they are considered non-European.
He was at the centre of a scandal in the eastern state of Thuringia this month, when a liberal politician was elected state premier thanks to AfD votes. It has been taboo in post-war Germany to do any political deals with the far right.
The SPD’s Michael Roth, who is minister of state for Europe, said attacks like the one in Hanau were “nourished ideologically by fascists like Höcke”.

Far-right killings since the NSU case have raised questions about Germany’s protections against neo-Nazis and other racists. Their propaganda is rife on the internet and they have proven how quickly they can use social media to mobilise their supporters.
The Halle synagogue attack last October triggered calls for better police protection of Jewish sites: no extra security had been mounted for the Jewish Yom Kippur festival, and only a thick, strengthened door prevented a bloodbath.
Germany remains haunted by the reign of terror unleashed by Hitler’s Nazi regime and their mass murder of Jews in the 1940s.
Far-right violence hits a raw nerve in a country that outlaws Nazi symbols and propaganda, and which prides itself on its democratic institutions.
The German government estimates that about 13,000 violent far-right extremists are active in Germany. That is a huge surveillance challenge, in a country which has strong laws against violating personal privacy.


Prof Peter Neumann, a terrorism expert at King’s College, London, tweeted that the Hanau suspect published a 24-page manifesto written in excellent German, without grammatical mistakes.
It reveals that “he hates foreigners and non-whites,” Prof Neumann says. “Although he doesn’t emphasise Islam, he calls for the extermination of various countries in North Africa, Middle East and Central Asia (which all happen to be majority Muslim).”
The manifesto echoes that of Stephan Balliet, the suspect charged with murder over the Halle attack. It emerged that he had been inspired by the New Zealand mosque attacker Brenton Tarrant, who has been charged with 51 murders.