August 17, 2019February 23, 2021 by milena rampoldi
John Bolton’s threats to scuttle tiny U.N. peacekeeping mission stirs fears over regional stability
LAAYOUNE, Western Sahara—The world’s longest minefield stretches hundreds of miles through the Sahara, cutting a path through one of Africa’s quietest conflicts.
For nearly three decades, a few hundred United Nations soldiers have ensured that this 1,700-mile cease-fire line, which separates Moroccan soldiers from an outgunned group of Western Sahara militants striving for independence, has remained quiet.
To the U.N., this tiny peacekeeping mission is a success. But to the White House, it’s a failure, one that President Trump’s national security adviser, John Bolton, has zeroed in on as Exhibit A of the shortfalls of the U.N. and the international order it represents.
Mr. Bolton is putting the weight of the White House behind a contentious plan to resolve the Western Sahara conflict by turning the screws on the U.N. and trying to force the rival parties to cut a deal.
“This administration has been clear about its desire to effectively manage finite resources at home and abroad,” said one senior Trump administration official. “Neither we nor our international partners should be mired in…frozen conflicts.”
The U.N. spends more than $6.6 billion every year on peacekeeping operations. The mission in Western Sahara costs about $50 million a year, and the 250 U.N. soldiers deployed there are stretched thin.
White House efforts to resolve this small African problem come with risks. Failure could stoke discontent in one of the few remaining pockets of stability in North Africa, creating new opportunities for Islamic State or al Qaeda to expand.
Western Sahara, an area the size of Colorado with about a half-million residents, isn’t known for much besides an annual multiday marathon. But it’s home to the oldest of the U.N.’s seven active peacekeeping operations in Africa.
Read more… 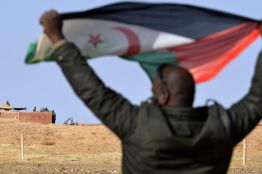 A Sahrawi man waving the flag of the rebel Polisario Front at Moroccan soldiers guarding a wall that separates Western Sahara from Morocco in February 2017. AMAL BELALLOUFI/Agence France-Presse/Getty Images