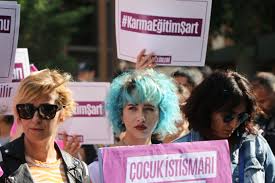 High school students stood against harassment
At Bahcesehir Ataturk Anatolian High School, the students started protests in their school against the director who said, “Don’t wear those tight pants if you do not want to be harassed.”about a harassment which happened in their school. The reaction of students who made a sound against harassment resulted with a gain. A legal action was initiated about the director.
On 11 September, the Ministry of National Education removed the clause of coeducation from the regulation.
In October, in Kadriye Moroğlu High School all the school students started their campaign “#TacizVarSesÇıkar”(There is Harassment Raise Your Voice) for all of the students who were abused by their teacher, and they boycotted the lessons he was giving at school. 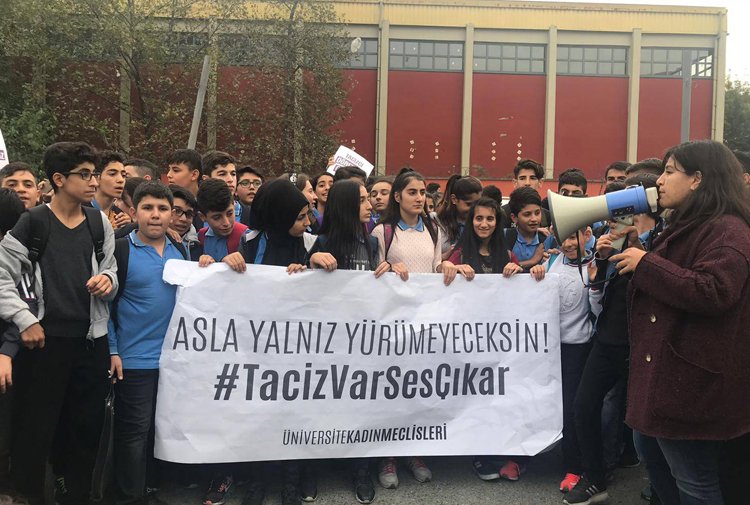 Women said #KadınlarDurmayacak (Women Won’t Stop) against the attacks on their lives and lifestyles
More than 500 women from all around Turkey gathered for Women Assembly of Turkey in Istanbul, Maltepe. It was discussed what should be done in the face of the increasing violence against women and children, and the goals were tired to be determined. The goal of constituting Women’s Assemblies in 81 provinces of Turkey was settled and women from different political thoughts were brought together.
In February, from Marmara University Theology Faculty Prof.Dr.Faruk Beser, asked to the Ministry of Health “Is it not possible to keep men and women in separate rooms in intensive care? Can’t a woman doctor take care of women and a male doctor of men?”
In November, Prof.Dr. Mehmet Kerali, Dean of Necmettin Erbakan University in Konya, said,
“Being a good housewife must be more important than being a president or a business woman.” and he added that he won’t give his vote to any female candidate in the upcoming elections. He resigned from his position upon dense reactions.
The artist Sila Gencoglu applied to the court as a result of the violence she had faced from the actor Ahmet Kural. Sila, wanted the implement the of the law no. 6284 effectively and Ahmet Kural had a suspension for 3 months. It also caused a great reaction from the public because of his attempts to normalize the violence against Sıia, and with his speeches after the event. At the same time, Women’s Assemblies stated that recently increased violence against women and that statements made in favour of the prosecutor in these situations should be stopped, since it is a crime according to the law and announced that they would initiate legal processes otherwise. This event emphasized why the law no. 6284 was a lifesaving law for women.
In the 25 November, the International Day for the Elimination of Violence against Women, Women’s Assemblies held meetings in many cities of Turkey. They were invited as a speaker to many different universities for panels. Women’s Assemblies and We Will Stop Femicide Platform shared the types of violence and the methods of stopping it with the public via Twitter with a co-work.
In Ankara, Çanakkale, Çorum, Bolu, Denizli, Eskişehir, Gaziantep, Istanbul, Izmir, Erzurum, Izmir, Aydin, Istanbul, Ankara, Konya, Sivas, Tekirdağ, Mersin and Kütahya women came together for the November 25.
In Kadıköy Women’s Assemblies were held together with the families of women who were killed on November 25, and women who were subjected to violence and made their protest together. With the intense participation in the search for justice, the action was blocked by the police. In the evening of the same day, the march in Taksim met the police again. Women carried out their act in Kadikoy. The walk spread all over Taksim, too. The proconsulate, which showed no determination to do its duty when the women wanted to be protected, decided against the march of women. It is not possible to stop the fight of those who want to walk to stop the violence. 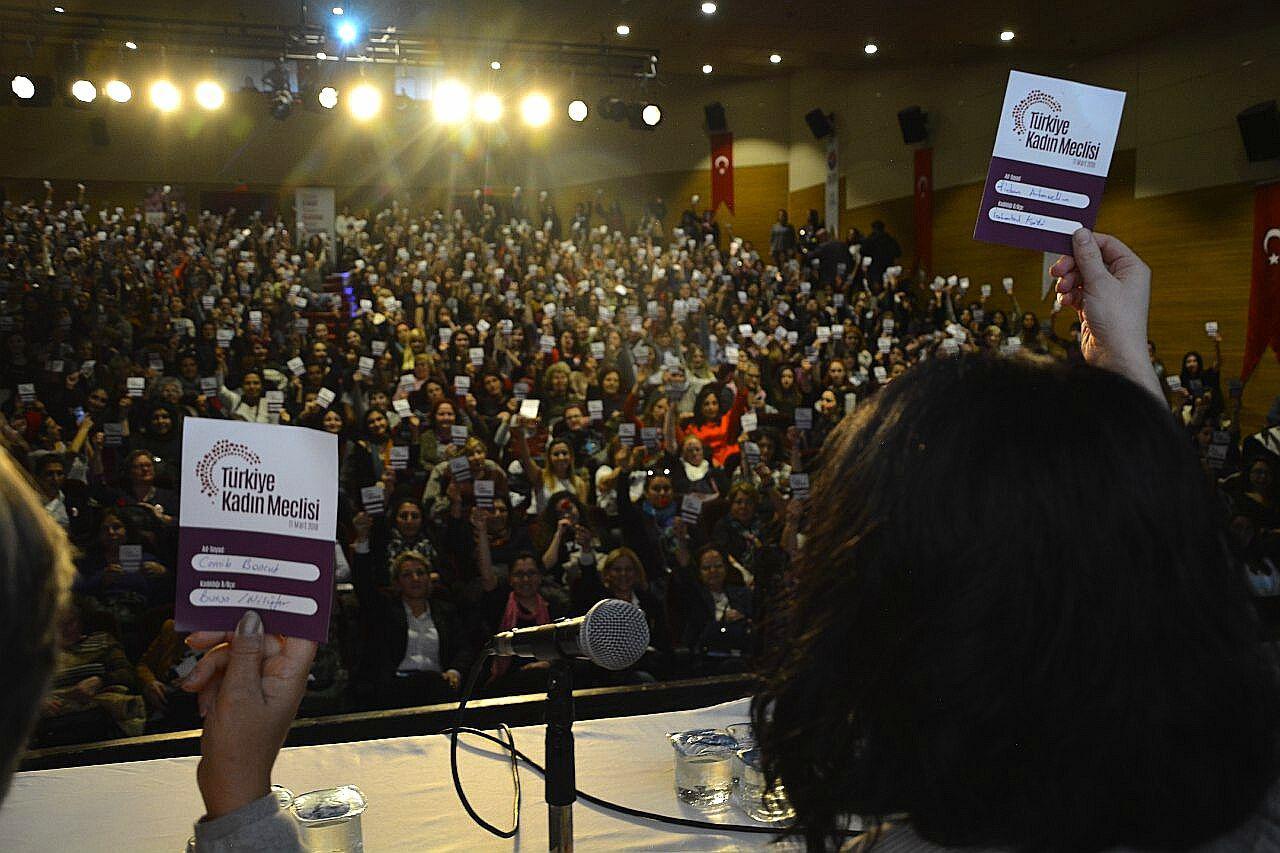 Sule Cet’s death was a femicide, not suicide.
We’re going to expose all the murders which are made to look like a suicide.
In May, we had to struggle for collecting evidence at the investigation stage to prove the murder of Sule Cet, who died falling from the 20th floor of a plaza.
Following the reaction of the society and the evidence gathered as a result of our struggle, it was stated in the report of Forensic Medicine Institute that an accurate evaluation could not be made and the result could not be known medically because they could not confirm whether Sule was killed or committed suicide, and if she was subjected to sexual violence or not. Women reacted against this statement of Forensic Medicine Institute. Because as an expert to court, Forensic Medicine Institute cannot say we do not know. In December, after completion of indictment, the file was sent to the High Criminal Court.
If suspicious deaths are covered and the perpetrators are not punished, those deaths will continue to increase. However, the struggle for Sule Cet will be a deterrent for whom trying to cover up the femicides.
It was claimed that Alara Karademir, a law school student who lost her life suspiciously in her instructor’s room, committed suicide.
The death of Aysun Yildirim, who died falling from the third floor of her workplace, was recorded as an unexpected death first and then as a suicide on the grounds that there was no place for prosecution. Her family objected to the verdict, but the objection was overruled. 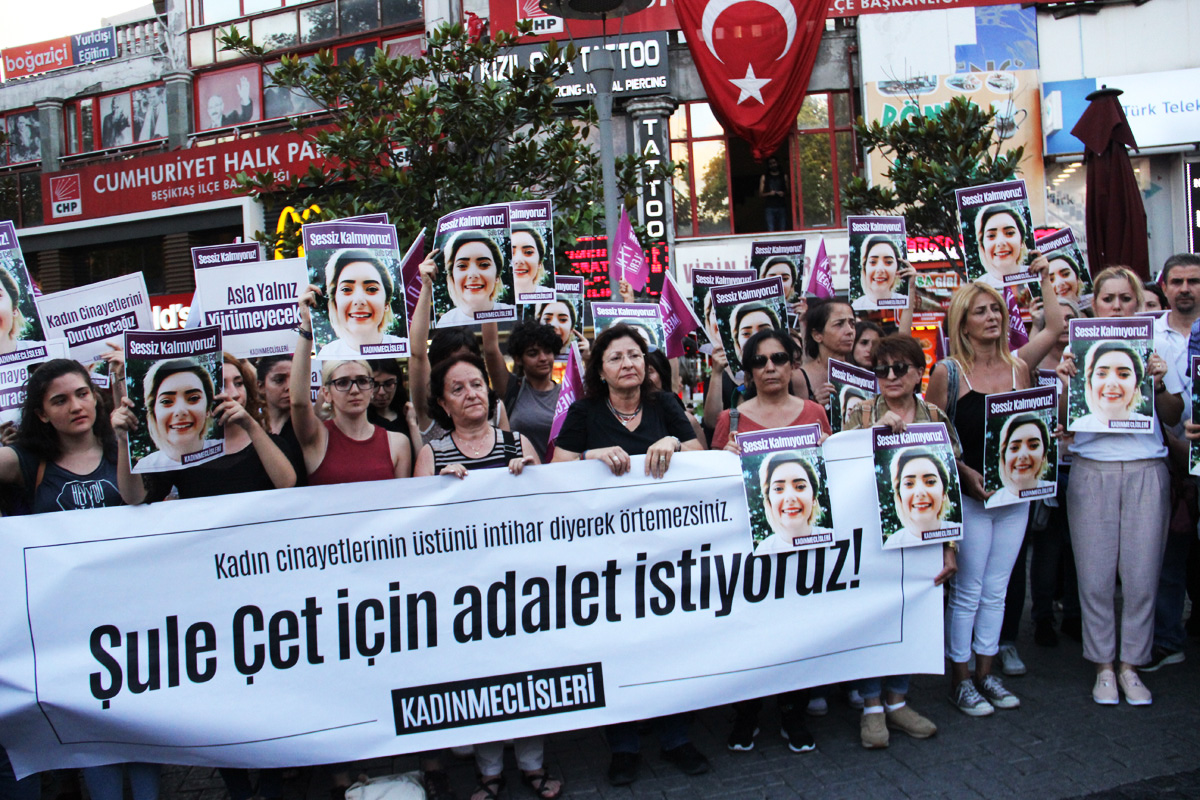 Attacks on women from life, from the street, from work to isolate continued
Women refused all the pinks that restricted their lives
The pink wagon, which was put into practice last year in Bursa, was removed in January this year. On the other hand in May, shopping center for women was opened in Istanbul and the opening was made by men. None of these practices are intended to prevent violence against women, but rather to exclude women from society. To isolate women from society without discussing the fact of increasing sexual violence in society, to defend that there is no other solution. However, it can be prevented if acted according to existing laws.
In February, Rize Yesilcay Sports Club Women’s Football team’s 2nd President and Kackar TV Sports Director Alaettin Onay in live broadcast announced Çaykur General Manager Imdat Sutluoglu’s explanation of “Supporting women athletes is a sin.” Yeni Akit writer Ahmet Gülümseyen in an article “Lady, of course, should do sports, but volleyball and similar branches of the ‘clothes’, how to explain the revealing of the body lines?” he said. Same month Gülsüm Özen was not surrendered to oppressions of society like “you are a widow women, sit at home” and she became a kickboxer champion in Turkish Open. In 2018, the struggle of women against the discriminative mentalities that trying to exclude women from social life, and sexist discourses are continuing.
Flormar workers are not alone
Along with the economic crisis affecting everyone, 2018 has been a year in which the struggle has increased for working women.
In May, 120 workers in Flormar, majority of whom are women, were fired because they became members of trade union. In spite of the resistance, which has become one of the greatest resistance in the country and continued during 2018 with the motto of #FlormarDeğilDirenişGüzelleştirir (Resistance makes you beautiful, not Flormar), the number of workers dismissed throughout the year has reached 132. Women who defend their labor rights and trade union rights both at home and outside put up resistance.
These economic pressures are not only taking place at Flormar
According to DISK’s (Confederation of Progressive Trade Unions of Turkey) January employment report; the number of general unemployed is 3 million 274 thousand. It has been announced that women’s unemployment is 14 percent and young women’s unemployment is 25.7 percent. In July, ILO announced that as of 2018, 606 million women could not participate in working life due to their obligations of care. 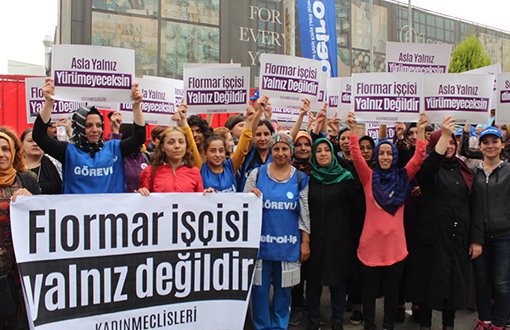 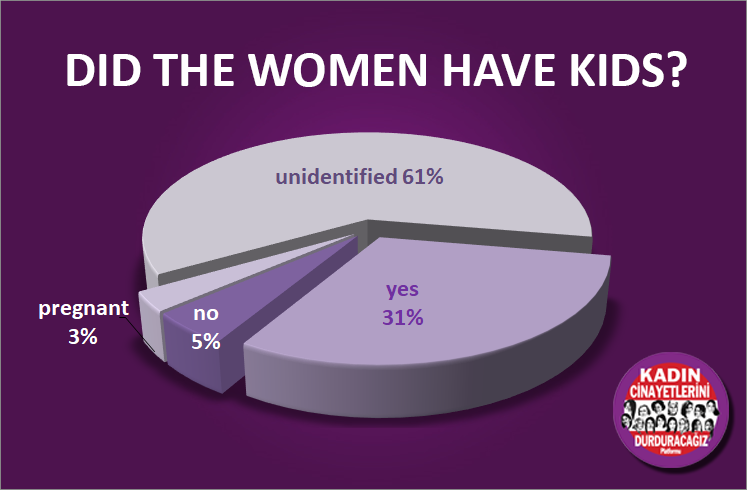 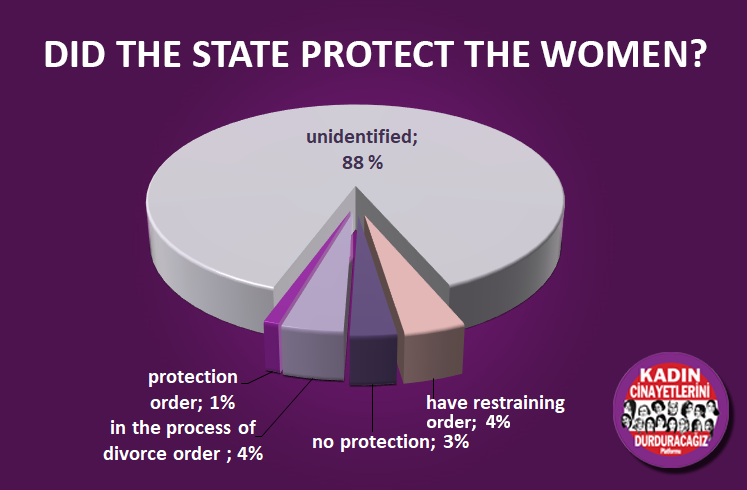 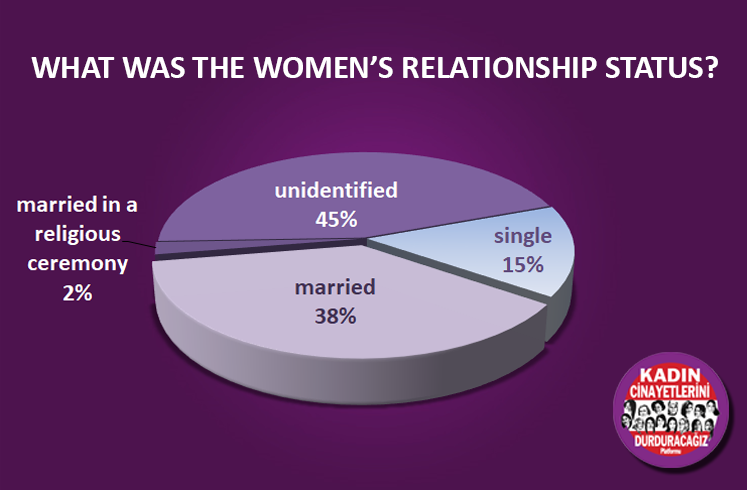 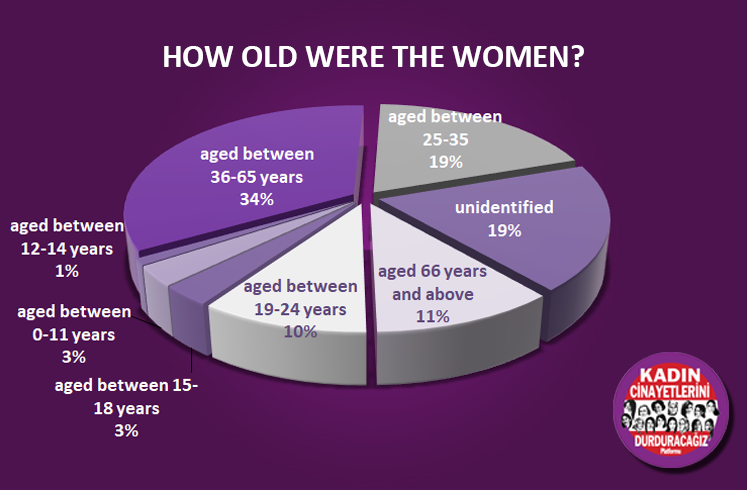 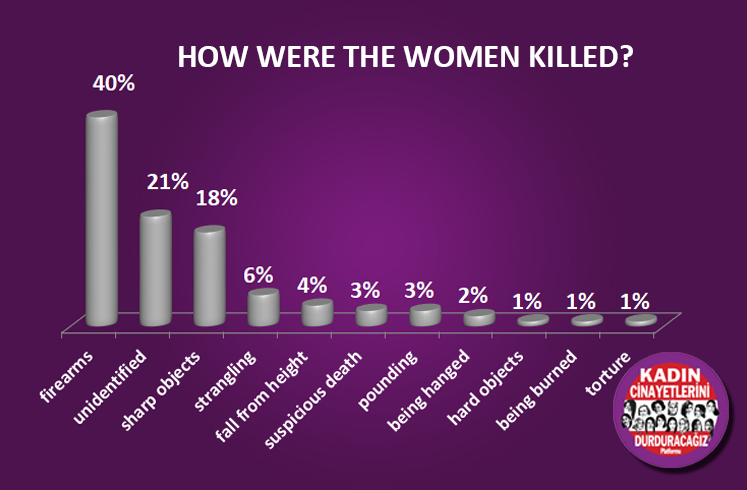 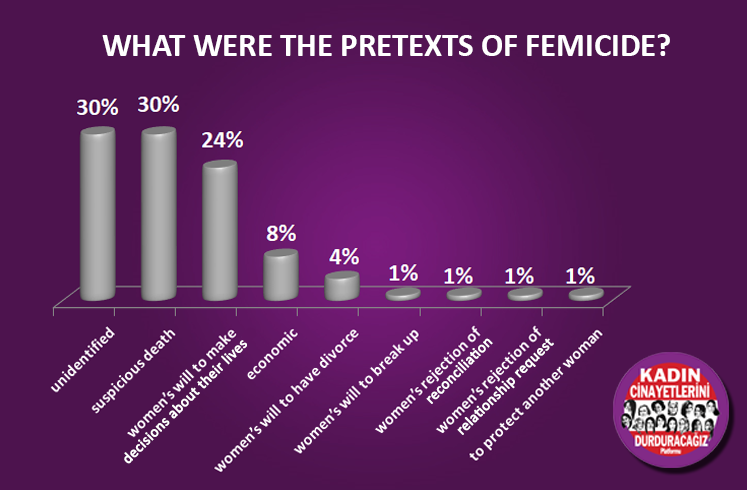 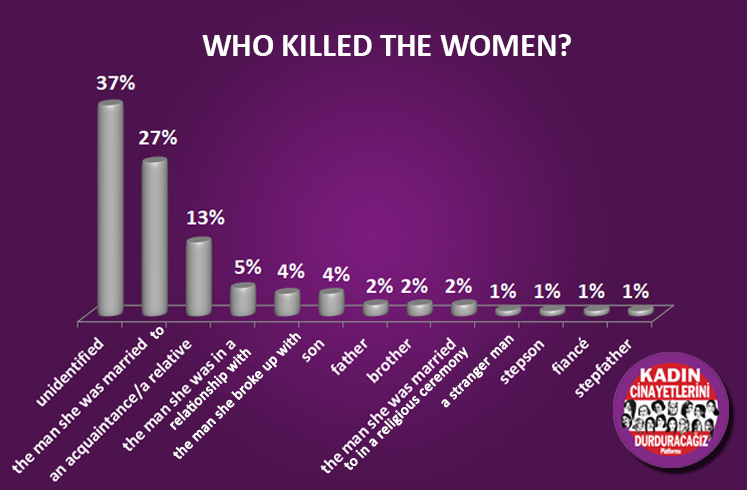 Femicide is the gender-related crime where females, from embryo to fetus, infant to child, adult to old, are murdered or forced to commit suicide by a man merely because “they are females” or because “they are acting against the social codes of their gender identity”. Femicides must not be perceived as murders in which only people of female sex are killed. These hate crimes aim to attack the female identity.