March 11, 2019February 23, 2021 by milena rampoldi
Israel’s export of Zionist nationalism and neocolonialism — and the accompanying oppression that in practice actually helps to create many of the very terrorist groups they fight against — is just as dangerous as its export of arms.
LONDON — Well-known British journalist Robert Fisk recently wrote a very telling and troubling article in The Independent regarding the outsized role of the state of Israel in the burgeoning tensions between India and Pakistan, two nuclear powers. The story — despite its importance, given the looming threat of nuclear war between the two countries — was largely overlooked by the international media.
The tit-for-tat attacks exchanged between India and Pakistan last week have seen long-standing tensions between the two countries escalate to dangerous proportions, though Pakistan helped to deescalate the situation somewhat by returning and “saving” an Indian pilot whose plane had been shot down in retaliation for India’s bombing of targets in a disputed area administered by Pakistan.
That bombing was retaliation for a car bomb attack launched by Jaish-e-Mohammed (JeM) militants, a group that both India and Pakistan recognize as a terrorist organization, against Indian forces. Some analysts have speculated that India’s decision to bomb this area was made by Indian President Narendra Modi, a Hindu ethno-nationalist, in order to rally his base ahead of upcoming Indian elections in May. 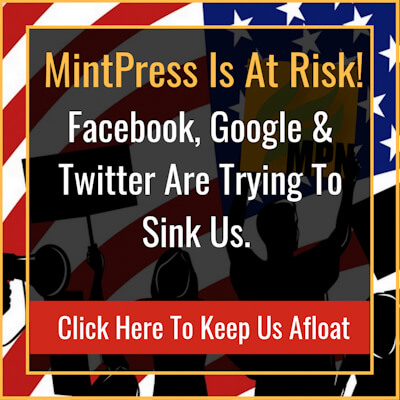 Yet, whatever the reason, the bombing has revealed the close ties that have formed between Modi’s India and Israel, particularly between their militaries. As Fisk notes, following the bombing, Indian media heavily promoted the fact that Israeli-made bombs — specifically, Rafael Spice-2000 “smart bombs” — had been used in the attack. Fisk writes:
Like many Israeli boasts of hitting similar targets, the Indian adventure into Pakistan might owe more to the imagination than military success. The ‘300-400 terrorists’ supposedly eliminated by the Israeli-manufactured and Israeli-supplied GPS-guided bombs may turn out to be little more than rocks and trees.”
Recently released satellite images seem to corroborate what Fisk predicted, as the bombing failed to hit its intended target and instead damaged a nearby forest. Image courtesy of Planet Labs, Google Earth and Digital Globe
Arguably the most important aspect of Fisk’s report is his detailing of the very close ties that have been forged between the Israeli and Indian militaries in recent years. For instance, according to Fisk, India was Israel’s arms industry’s largest client in 2017, spending nearly $700 million on Israeli air-defense systems, radars, ammunition and missiles. Many of those weapons had been promoted as “combat tested” after being used against Palestinians in the Gaza Strip, the world’s largest open-air prison. That same year, India represented 49 percent of Israel’s arms export market.
In addition to arms purchases, many Indian soldiers have traveled to the Negev desert to be trained by Israeli “special commando” units, and at least 16 elite Indian “Garud” commandos were recently based at two separate Israeli air bases.
Exporting oppression
Just as troubling as this military cooperation is that ethnonationalism and anti-Islam rhetoric are increasingly becoming the basis for the relationship between the two countries.
For instance, a recent Haaretz article, written by Shairee Malhotra and cited by Fisk, noted that “the India-Israel relationship is also commonly being framed in terms of a natural convergence of ideas between their ruling BJP and Likud parties.” Other reports have noted that this has translated into more “aggressive” policies from Modi targeting Kashmir and Muslims elsewhere in India and that continued Israeli goading of Modi’s anti-Islam tendencies could make life much more difficult for the estimated 180 million Muslims living in India. Indian police beat a Kashmiri Shiite Muslim for participating in a religious procession in Srinagar, Indian controlled Kashmir, Sept. 19, 2018. Dar Yasin | AP
While some analysts and reports have warned about this danger, Fisk notes that it will be difficult to prevent the Zionist, fascist nationalism of Benjamin Netanyahu’s Likud Party from influencing India’s ruling party, writing:
It is difficult to see how Zionist nationalism will not leach into Hindu nationalism when Israel is supplying so many weapons to India – the latest of which India, which has enjoyed diplomatic relations with Israel since 1992, has already used against Islamists inside Pakistan.”
Fisk goes on to note that “[s]igning up to the ‘war on terror’ – especially ‘Islamist terror’ – may seem natural for two states built on colonial partition.” Indeed, India’s actions in the disputed Kashmir region share many similarities to Israel’s neocolonial occupation of Palestine. For instance, the Muslim majority of Kashmir are treated as second-class citizens on their own land and their push for self-determination has been brutally suppressed by Indian forces. As of 2016, 500,000 Indian military personnel in the region were present in the region, roughly equating to one soldier for every 25 civilians. As Al Jazeera noted at the time, there have been more than 70,000 killings, about 10,000 enforced disappearances and 7,000 mass graves found since 1947 in Indian-administered Kashmir.
There are many other parallels between Kashmir and Palestine, including the fact that the British government shares a large share of the responsibility for both. Indeed, the British-brokered partition creating the current states of India and Pakistan in 1947 is the root of the current conflict in Kashmir much as the Britain-mandated creation of the Israeli state in 1948 is the root of the current conflict in Palestine. As far as Kashmiris and Palestinians are concerned, the governments of India and Israel picked up where their colonial master of years past left off.
If a deadly conflict ultimately breaks out between India and Pakistan, it will hardly be the first time Israel has armed controversial governments. Israel sold arms to the Rwandan government during the Rwandan genocide and, more recently, to the government of Myanmar during its “ethnic cleansing” of the Rohingya Muslims. Yet, as Fisk notes, Israel’s export of Zionist nationalism and neocolonialism — and the accompanying oppression that in practice actually helps to create many of the very terrorist groups they fight against — is just as dangerous as its export of arms.
Top Photo | Indian Prime Minister Narendra Modi, left, shakes hands with Israeli Prime Minister Benjamin Netanyahu during their meeting at the King David hotel in Jerusalem, July 5, 2017. Sebastian Scheiner | AP
Whitney Webb is a staff writer for MintPress News and has contributed to several other independent, alternative outlets. Her work has appeared on sites such as Global Research, the Ron Paul Institute and 21st Century Wire among others. She also makes guest appearances to discuss politics on radio and television. She currently lives with her family in southern Chile.