March 2, 2019February 23, 2021 by milena rampoldi
India and Pakistan are currently embroiled in their most serious crisis in several decades. While a nuclear exchange between the two sides is highly unlikely, the possibility nevertheless remains.
For years, it’s been a bedrock principle of international security: possessing nuclear weapons deters nations from using them in warfare. Indeed, since 1945, no country has used one. However, there’s an important caveat to this: nuclear weapons may forestall nuclear exchanges, but they don’t deter nuclear states from using military force against each other.
This means that the potential for escalation to nuclear conflict, while remote, is still quite real. There’s no better illustration of this than the India-Pakistan relationship, which is currently embroiled in its most serious crisis in several decades. India and Pakistan fought three major wars before they became nuclear weapons states. But since they achieved formal nuclear status in 1999, they have continued to use limited military force.
They frequently engage in cross-border firing along their disputed frontier, known as the Line of Control. In the 2000s, India staged several limited cross-border raids. In 2016, New Delhi executed what it described as a “surgical strike” – an operation that hit Pakistani terrorist launch pads along the border.
Audacious use of force
And then came India’s move earlier this week. After a Pakistan-based terror group with deep links to the country’s security establishment carried out an attack in India-administered Kashmir that killed more than 40 Indian security personnel, New Delhi retaliated with arguably its most audacious use of force in Pakistan since a brutal war back in 1971.
Indian aircraft, according to New Delhi’s official statements, flew over the airspace of Pakistan-administered Kashmir, crossed into the province of Khyber-Pakhtunkhwa and carried out air strikes on Pakistani terrorist targets. Not since the U.S. raid on Osama Bin Laden’s compound – admittedly, a much more sophisticated and riskier operation than the one staged by India this week – has such a dramatic military incursion been made on to Pakistani soil.
New Delhi described this operation not as defensive, but as pre-emptive – an effort to disrupt fresh plans for terrorist attacks on India. The implication is that India has declared its willingness to use force in Pakistan – and well into Pakistan, not just along the border – to eliminate imminent terrorist threats. This suggests the potential for more military force in the future.
It’s also a reflection of India’s “Cold Start” doctrine, which essentially institutionalises the strategy of using limited military force, all below the nuclear threshold, against Pakistan. Islamabad, undeterred, carried out its own retaliatory strike after India’s. It hit Indian military targets in India-administered Kashmir. Clearly, when it comes to India and Pakistan, there is plenty of space to operate under the nuclear umbrella. But that space is not unlimited.
A sobering lesson
It’s not just all these escalations below the nuclear threshold that put India and Pakistan at risk of a possible nuclear exchange. Consider that Pakistan is producing tactical nuclear weapons at one of the highest rates in the world and that Islamabad has never declared a no-first-use policy – which means, hypothetically, that any conventional use of force by India could be met with a Pakistani nuclear response. 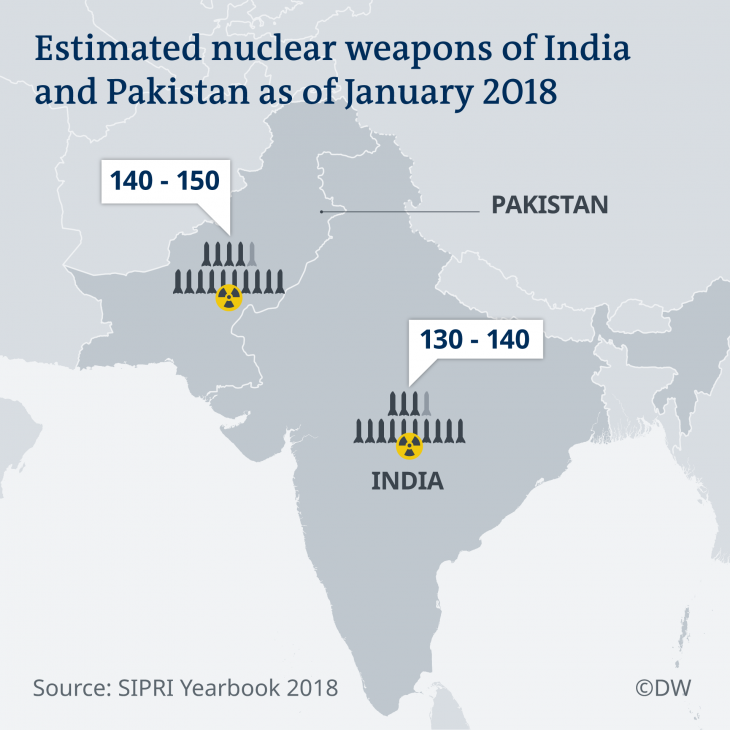 As Michael Kugelman, Asia Program deputy director and senior associate for South Asia at the Woodrow Wilson International Center for Scholars, says, “when it comes to India and Pakistan, there is plenty of space to operate under the nuclear umbrella. But that space is not unlimited”
The intention here is not to make alarmist predictions. A nuclear exchange remains highly unlikely. In the current crisis, escalation would need to go up quite a few more rungs. And at any rate, if tensions really spiral out of control, the international community – led by Washington, but also by institutions like the United Nations – would intervene to defuse tensions. Still, the possibility remains. And recent history offers a sobering lesson.
Back in 1999, around the time India and Pakistan formally became nuclear states, Pakistan-backed forces crossed into India-administered Kashmir. India attempted to repel them with airstrikes. The conflict, which began in May, stretched into July. Early that month, according to a disclosure made in 2015 by Bruce Reidel, a former U.S. intelligence analyst, the CIA concluded that Pakistan was planning to deploy – and possibly use – nuclear weapons. “The intelligence,” according to Reidel, “was very compelling.” Soon thereafter, the Bill Clinton administration helped defuse the conflict, known as the Kargil crisis.
If Reidel’s account is accurate, then the Kargil crisis may have marked the closest the world has come to nuclear war since the end of World War II. Unfortunately, one can’t rule out another Kargil-like moment for India and Pakistan sometime down the road.
Michael Kugelman
© Deutsche Welle 2019
Michael Kugelman is the Asia Program deputy director and senior associate for South Asia at the Washington-based Woodrow Wilson International Center for Scholars.