Venezuela: A simple guide to understanding the current crisis

February 2, 2019February 23, 2021 by milena rampoldi
As Venezuela’s crisis reaches a tipping point, here’s a simple guide with key points of the current situation.
After years of turmoil, Venezuela‘s political crisis escalated to a new level last week as the head of the opposition-controlled National Assembly, Juan Guaido, declared himself interim president.
The proclamation came after President Nicolas Maduro experienced the biggest protests against his mandate in two years.
But Maduro said he is not leaving his seat in power, and accused Guaido of staging a United States-backed coup.
The US has stepped up pressure on Maduro, imposing sweeping sanctions against the state-owned oil company PDVSA, and saying “all options are on the table” to replace his government.
But Maduro still enjoys the support of the country’s armed services, as well as some of the major world powers, including China, Russia and Turkey.
As the crisis deepens, here is a simple guide to understanding the key points in the current situation.
A contested election
President Maduro was first elected in April 2013 after the death of his predecessor, Hugo Chavez.
During his presidency, the economy further crumbled due to many factors, including a drop in oil prices. Millions fled hyperinflation, poverty and food and medicine shortages.
Protests shook the country in 2014, but after the protests and the regional elections in 2017, the opposition splintered.
Fresh elections took place in May 2018 after originally being scheduled for December of the same year.
Many candidates were barred from running, and most of the opposition boycotted the vote, labelling it “fraudulent”.
Maduro’s government maintained the elections complied with the necessary requirements.
On May 21, he declared victory, vowing to work swiftly to stabilise the country’s economy. “You have put your trust in me and I will pay back this infinite, loving trust,” Maduro said at the time.
Inauguration day: January 10, 2019
On January 10, Maduro was sworn in for a second six-year term, despite opposition from several other Latin American countries.
The Organization of American States refused to recognise his new term, with Paraguay announcing it was breaking diplomatic relations with Venezuela.
The US also refused to recognise what it called the “Maduro dictatorship’s illegitimate inauguration”.
Inside the country, opposition leaders branded Maduro’s second term illegitimate and called for the opposition-controlled National Assembly to declare the presidency vacant.
Citing Articles 233 and 333 of the Venezuelan constitution, the National Assembly heeded the call.
However, the Supreme Court ruled that all actions taken by the National Assembly were null and void.
Despite the Supreme Court’s ruling, Guaido declared himself interim president on January 23, with the US leading a chorus of other countries in recognising Guaido as the country’s new leader.
Maduro defended his presidency, saying, “We are a true, profound, popular and revolutionary democracy … not a democracy of the elites.”
“And I, Nicolas Maduro Moros, am a genuinely and profoundly democratic president.
“We have inherited a great legacy. We cannot fail and we will not fail,” he added.
Maduro accused the opposition of staging a US-backed coup. 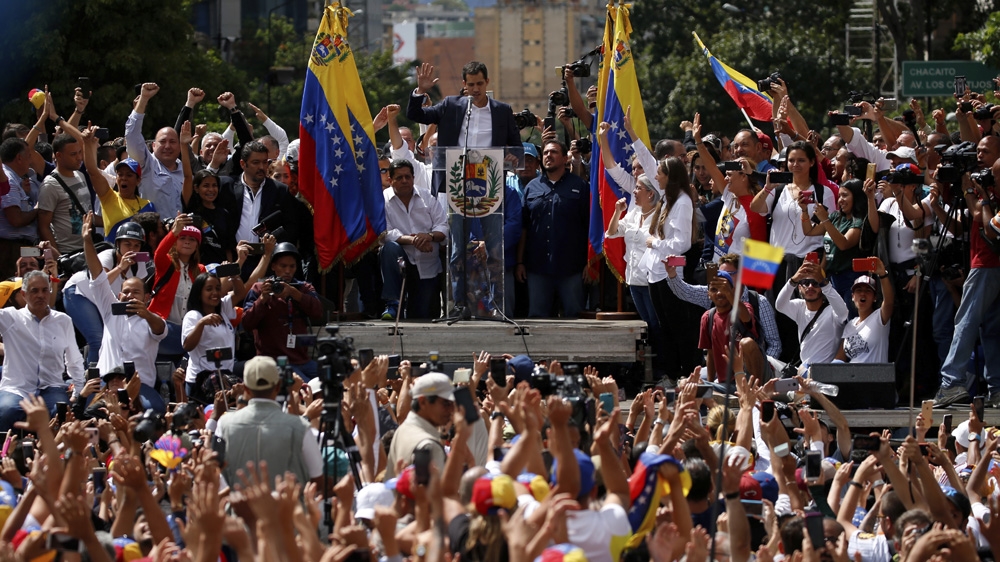 Juan Guaido looks down and holds up his hand during his symbolic swearing-in as interim president of Venezuela [File: Fernando Llano/AP]
Who is Juan Guaido?
Guaido rose from obscurity to the self-declared interim president of Venezuela in a matter of weeks.
The 35-year-old politician was relatively unknown when he was named the president of the National Assembly in early January.
Guaido was born in the port city of La Guaira, in the state of Vargas. He was 15 years old when Chavez came to power in 1999.
From an early age, he was involved in politics. He was a founding member of a centrist political party, Popular Will, working directly with key opposition leader Leopoldo Lopez.
After declaring himself interim president on January 23, Guaido, with the backing of the US, laid out his broad plan for Venezuela.
His plan focuses on the opposition’s strategy for the economy and oil resources, and examines public services, security, governability and society.
Guaido has also called on members of the military to disavow Maduro, promising all security forces personnel amnesty if they break with the leader.
“The amnesty we’re proposing aims to bring those military forces that are linked to the government [closer to the people] we aim to create harmony [among the different powers],” Rachid Yasbek, a leader from the opposition group said.
The story behind Venezuela’s self-declared interim president (1:41)
Why the military’s support is important?
But the military’s highest ranks have declared their loyalty to Maduro.
Although Maduro lacks the military pedigree of Chavez, the relationship his late mentor had with the armed services has helped lay the groundwork for its continued support.
“Hugo Chavez was part of the military, and during its government, it established important links with them, many of them were rewarded with pay raises and others were in control of key positions and industries,” Carlos Pina, an analyst from the Central University of Venezuela, said.
While there appeared to be some fractures within the lower ranks at times, the vast majority of the armed services have continued to pledge their support for Maduro.
Venezuela’s army declares loyalty to Maduro (2:42)
Who supports whom?
Maduro’s supporters
Maduro’s major supporters include the Venezuelan military and the Supreme Court, Russia, China, Turkey, Cuba, Bolivia, Iran and Nicaragua.
Both China and Russia blocked a push in the United Nations Security Council to back Guaido.
State oil company PDVSA, which was recently hit with US sanctions, has also stood by Maduro.
“We have no other president” besides Maduro, PDVSA President and Oil Minister Manuel Quevedo, a career military officer, said in a January 23 statement.
Guaido’s supporters
The US recognised Guaido shortly after he proclaimed himself interim president on January 23.
Members of the Lima Group, excluding Mexico, rallied behind Guaido. Germany, Spain and France also said they would recognise Guaido as president if Maduro failed to call elections.
Among other countries recognising Guaido are Australia, Israel Chile, Costa Rica, Ecuador, Guatemala, Honduras, Panama, Paraguay and Peru.
Defence attache Colonel Jose Luis Silva, Venezuela’s top military envoy to the US, declared himself a supporter of Guaido, saying, “He is the only legitimate president.”
What is the situation like for Venezuelans?
For normal Venezuelans, everyday life has become increasingly difficult. One of the biggest challenges people face is hyperinflation. According to a studyreleased by the National Assembly, by the end of 2018, prices were doubling every 19 days on average.
“In Venezuela, you work a whole month and you cannot afford the basic food that Venezuelans include in their diet,” Yasbek said.
“In the stores, shelves are empty, and the social programmes are not being able to relieve the stress of not finding the basic things.”
The health sector is also struggling. The crisis in Venezuela has reportedly resulted in 85 percent shortages of medicines, poor hospital conditions and migrations abroad as medical professionals leave the country.
As a result of these conditions, the country is facing what has become the largest exodus in Latin American history. Over three million people have fled the country since 2014, and it is expected to reach 5.3 million by the end of 2019, according to the UN estimations.