February 17, 2019February 23, 2021 by milena rampoldi
Iran ‘explicitly conveyed’ to Pakistan that it expects ‘serious and decisive action’ against Jaish al-Adl.
Iran has lodged an official protest with Pakistan‘s ambassador to Tehran over the suicide attack in Sistan-Baluchestan province that killed 27 Islamic Revolutionary Guard Corps members.
Foreign Ministry spokesman Bahram Ghasemi said on Sunday that Iran “explicitly conveyed” to Pakistani Ambassador Rafat Masoud that Tehran expects Islamabad and its military “to make a serious and decisive action” against the Jaish al-Adl and its base inside its territory, Mehr news agency reported.
Ghasemi also said that the foreign ministry asked Pakistan to take “immediate and necessary measures” to identify and arrest the attackers, who carried out Wednesday’s bombing, which also left 13 Revolutionary Guard members injured.
Masoud took over her post as Pakistan’s first female ambassador to Iran in August.
The diplomatic protest comes as Iran’s parliament speaker Ali Larijani said in a strongly-worded statement that the Pakistani government should be held to account for the incident.
“The Pakistani government should be accountable for this act involving the group orchestrating and conducting the operation from their territory,” Larijani said during Sunday’s session of parliament.
Larijani said Pakistan “cannot act irresponsibly”, adding that “such behaviour will severely damage the level of cooperation” between the neighbouring countries.
Speaking at an event in Hormozgan province on Sunday, President Hassan Rouhani also repeated his earlier threat to avenge the attack, saying he “regrets” the “wrong policies” of Iran’s neighbours, without mentioning Pakistan.
On Saturday, Iran’s deputy foreign minister Seyed Abbas Araghchi held a last-minute meeting with Sushma Swaraj, the foreign minister of India, the regional rival of Pakistan, to discuss the attack in Sistan-Baluchestan and a similar incident in Indian-administered Kashmir that killed 42 paramilitary members. 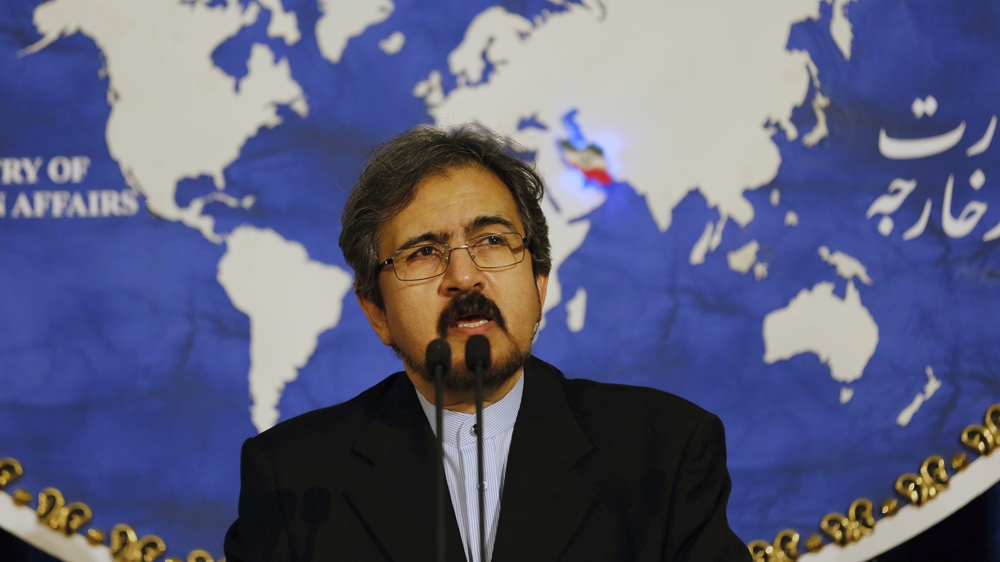 Ghasemi said Iran asked Pakistan to immediately arrest and prosecute Jaish al-Adl members responsible for the attack that killed 27 [File: Abedin Taherkenareh/EPA]
Both Jaish al-Adl and Jaish-e-Muhammad, which claimed responsibility for the attack in Kashmir, are based in Pakistan.
Iran shares an almost 1,000km border with Pakistan, and in recent years has borne the brunt of cross-border attacks carried out by Jaish al-Adl and other affiliated armed groups.
Jaish al-Adl was founded after its parent group, the al-Qaeda-affiliated Jundullah, was dissolved after Iran captured and executed its leader, Abdolmalek Rigi, in 2010.
In 2013, the group abducted and killed 14 Iranian forces in an ambush near the Iran-Pakistan border.
In 2014, at least five members of the Iranian security forces were also abducted.
In October 2018, the armed group abducted 12 Iranian security personnel near the southeastern city of Zahedan. Pakistani security forces later intervened and secured the release of at least five of the 12 abductees.
Reza Khaasteh, a Tehran-based journalist, told Al Jazeera that Iran needs Pakistan’s cooperation to go after Jaish al-Adl.