February 26, 2019February 23, 2021 by milena rampoldi
Proposed amendments to Egyptʹs constitution will enshrine the militaryʹs position above the state by giving it greater legal means to intervene against elected governments and prosecute political opponents. Egypt is set to become a military dictatorship in name as well as deed.
On 3 February, Egyptian parliamentarians from Tahya Misr (“Support Egypt”), a coalition supporting President Abdul Fattah el-Sisi that comprises one-fifth of parliament, submitted a proposal to amend the Egyptian constitution. Two days later, the General Committee accepted the proposed amendments, a preliminary step that opens the way for a parliamentary debate.
The twelve amendments and nine new articles are likely to pass, as only a simple majority is needed to approve a constitutional amendment and, according to Speaker of the House Ali Abdul Aal, two-thirds of the parliament already endorses them.
As expected, the proposed amendments include a change to Article 140 to extend presidential terms from four to six years and a new clause allowing the current president to run for an additional two terms. If passed, the amendments would allow President Sisi to remain in power until 2034.
Carte blanche for the military
Yet the proposed constitutional amendments also include provisions that legalise military interventions in politics (Article 200), expand the power of military courts (Article 204) and increase the power of the executive over the judiciary (Articles 185, 190 and 193). These amendments will enshrine the militaryʹs position above the state by giving it legal means to intervene against elected governments and enhanced powers to prosecute its political opponents. 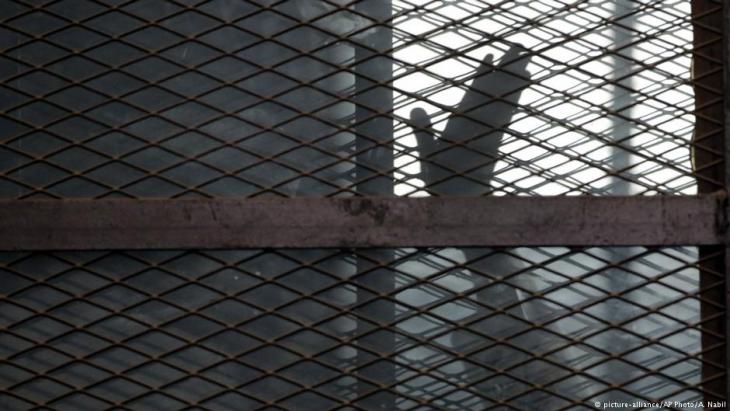 Executions increasingly the judicial instrument of choice: hundreds of death sentences have been issued since the military coup led by Sisi in 2013. Cause for concern, however, is the surge in the number implemented in recent weeks. Fifteen people have been executed this month, amid credible allegations that the confessions that led to trial were extracted under torture – a situation that looks unlikely to improve
The amendment to Article 200, which covers the constitutional role of the military, adds “protection of the constitution, democracy, the state and its secular nature, and personal freedoms” to the militaryʹs duties. This gives the military a constitutional right to carry out a coup and impose direct military rule, especially if an Islamist electoral victory threatens the “secular” nature of the state. The amendment effectively allows the military to abrogate electoral results at will under the pretext of protecting the constitution, democracy, or the state.
Similarly, the amendment to Article 204 removes the word “direct” from the phrase “direct attack” when describing which crimes against the military fall under the jurisdiction of its courts. This increases the power of the military to prosecute civilians. Finally, the amendment to Article 234 makes the appointment of the Minister of Defence dependent on the approval of the Supreme Council of Armed Forces (SCAF), where the current text stipulates that this approval is only required for the first two presidential terms after the constitution is ratified. This ensures that the military remains an independent actor with control over its own affairs and no civilian oversight.
Independent judiciary severely compromised
In addition to these proposals to expand the militaryʹs powers, a set of amendments to Articles 185, 193 and 190 strongly curtail the independence of the judiciary. Together, they wipe out any legal avenues to challenge the regime in court by ensuring that only vetted candidates head the various judicial institutions, eliminating their budgetary independence and curtailing the jurisdiction of the State Council.
The amendment to Article 185, which allowed the judiciary to organise its own affairs, removes reference to each bodyʹs “independent budget”. Moreover, it adds a paragraph giving the president the authority to appoint the heads of the judicial institutions, from a pool of seven candidates based on seniority, for one period of four years.
It also allows for the creation of a high judicial council, headed by the president, to oversee appointments, secondments and promotions within the judiciary. The presidentʹs advisory role on this council would allow him to become the arbiter for draft laws that regulate judicial affairs.
Article 193, which deals with the Supreme Constitutional Court (SCC), currently gives the courtʹs General Assembly the authority to select the head of the court and his deputies. The proposed amendment to the article will instead give the president the authority to select the head of the court from among the five most senior vice presidents of the court. In the articleʹs proposed form, the president further has the authority to select these vice presidents from between two candidates, one nominated by the head of the court and the other by its General Assembly.
The amendments also give the president the power to appoint the head and members of the SCCʹs Commissioners Committee, a panel of experts that provides non-binding legal opinions, from among nominees provided by the SCC president. While court rulings and legal rulings favouring the military and executive branch had gradually been undermining the independence of the judiciary, these amendments provide a constitutional basis for curtailing judicial autonomy that will be nearly impossible to reverse.
Paving the way for more corruption
The amendments also affect Article 190, which outlines the duties of the State Council, the system of courts responsible for resolving disputes among state administrative bodies and between the state and the general populace. The proposed changes remove the councilʹs responsibility for reviewing contracts signed by the state or one of its public institutions – and does not designate a replacement.
This removes any judicial oversight over government contracts, increasing the power of the government and opening up opportunities for more graft. Considering that the military has been heavily increasing its economic footprint with the help of government contracts, it is bound to profit from removing this oversight.
In addition, where the State Council currently reviews all legislation to ensure it is in line with the Constitution, the proposed amendment also states that it will now only review legislation that has been referred to it. This significantly reduces the ability of the State Council to challenge the executive – especially since it was embroiled in a protracted legal struggle with the regime over the transfer the island of Tiran and Sanafir to Saudi Arabia.
Reducing the power of the State Council can therefore also be seen as way to punish it and make further protracted legal struggles between the government and the judiciary unlikely.
The anticipated passage of these amendments will re-draw the Egyptian political system and remove the last pretence of separation of powers or the subordination of the military to the elected government. Egypt is set to become a military dictatorship in name as well as deed.
Maged Mandour
© Carnegie Endowment for International Peace 2019
Maged Mandour is a political analyst and writes the “Chronicles of the Arab Revolt” column for Open Democracy.