January 13, 2019February 23, 2021 by milena rampoldi
Agricultural engineer by day, artist by night, Yasser Al Mulla depicts philosophies of Sufi tradition in his drawings.
Yasser Al Mulla’s colourless, intricately lined drawings chromatically compliment his crisp white ankle-length thobe and ringed black egal.
As a Qatari agricultural engineer, Al Mulla spends his days developing the greenery around Doha and perfecting grass pitches in preparation for the 2022 World Cup. But in his evenings, he delineates themes of Sufism and various cultures with discursive black lines on a vast white canvas.
Though his artwork has been praised for its mystifying attention to detail, some have questioned why Al Mulla, a 38-year-old Sunni Muslim, depicts the philosophies of the Sufi tradition for leisure.
“I get a lot of comments from people asking ‘why Sufism? Are you Sufi?’ which they don’t like,” Al Mulla told Al Jazeera in his studio recently. “They don’t understand that it is a way of life more than a religion, but I don’t mind. It opens the door for them to do more research.”
Since high school, Al Mulla has been fascinated by the poems and teachings Mansur Al Hallaj, a Sufi preacher who is best known for his saying: “I am the truth.” Many have interpreted it as a claim to divinity, while others believe it to be a mystical defeat of the ego that allows God to speak through an individual.
“I’ve been in love with Al Hallaj for a very long time, ever since I had questions of creation and read for the truth,” said Al Mulla. “The amount of peace and philosophy in his writings have inspired me.” 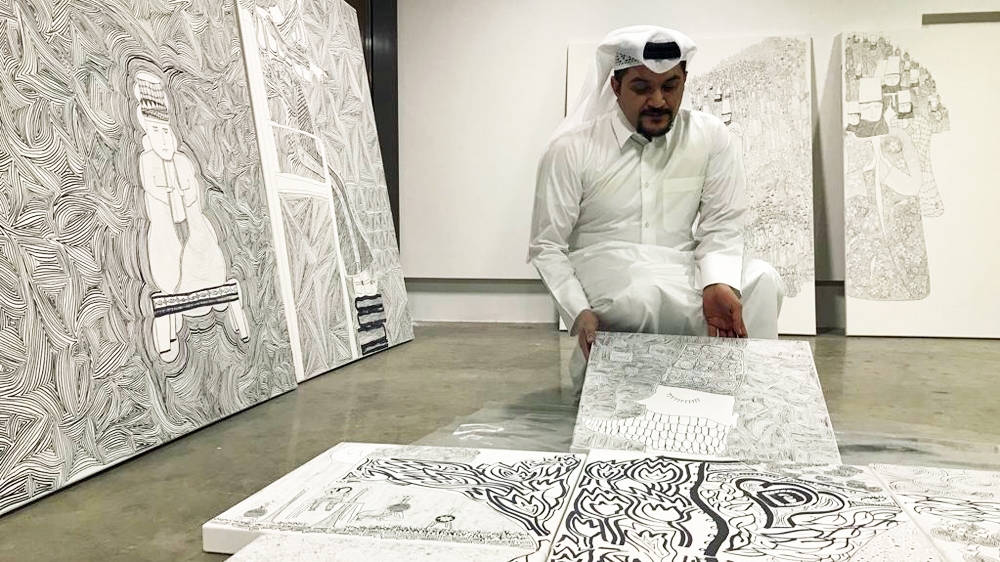 Al Mulla seen here in his studio in Doha [Ayilah Chaudhary/Al Jazeera]
From a distance, Al Mulla’s drawings resemble inky scribbles. A few steps closer reveal a religious or cultural motif, such as Whirling Dervishes or The Khalifat Visitors of the Abbasid Caliphate, with meandering lines and geometric shapes rippling around them. The figures are doodle-like illustrations, while the lines are contrastingly opaque, undulating and parallel, similar to a moire pattern.
In all of his drawings, Al Mulla attempts to “raise questions” in his art and depict his thoughts through the use of discursive, achromatic lines. “With colours, an artist can say a lot of things,” said Al Mulla, who has a colour-mixed optic condition. “But the line technique is limitless, you can attract people to the ideas inside your brain through endless lines.”
Al Mulla began creating Sufism-inspired line drawings as a 2017-18 resident of the Doha Fire Station, a former emergency services headquarters-turned art hub in the Qatarcapital.
His studio furnishings do not deviate from his monochrome theme – the couch is black, the white walls are used as canvases and the floor is sprinkled with ebony black pens that Al Mulla decides not to be used twice. As he commits hours to a drawing after compelling inspiration presses his mind, Beethoven’s piano compositions gently play in the background.
“This is not work for me; it relieves me from the stresses of work,” said Al Mulla.
He studied engineering at Qatar University and law at Cairo University, but did not begin drawing until 2015, at age 35. One night, he had a vivid dream about a tsunami and chose to sketch it with a coal-black pen, and consequently discovered his artistic ability. “After that, I never looked back. I am more balanced after I started art. I am happier than I was years ago because I have my answers now, which I try to put in my paintings.”
He finds his reputation shift to an artist difficult to reconcile with since he was previously known as “the engineer guy”, working on landscape projects from Doha’s Aspire Park to those commissioned by Qatar’s emir himself.
Al Mulla has gained significant popularity for his landscape art, which is an external representation of his artistic ability. His agricultural work for the World Cup beautifies otherwise barren areas of Qatar and was recently profiled by The New York Times. Regardless of his success, Al Mulla does not want his career to be his “only thing”. 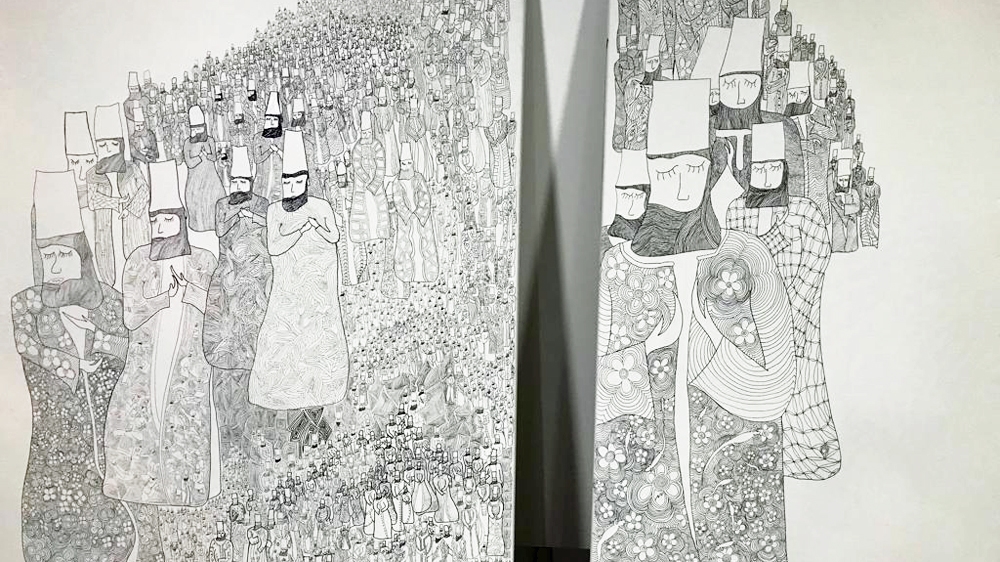 The term Sufi stems from “Suf”, the Arabic word for wool, and refers to a garment in which Sufi mystics are often depicted [Ayilah Chaudhary/Al Jazeera]
He dedicates certain days of the week entirely to his wife and three children, a certain day to his parents as the eldest son and certain nights to his drawings.
“I don’t follow an exact schedule, but I know I don’t want to be consumed by work.” Similarly, Al Mulla doesn’t have an exact plan in mind before he draws, but rather a preliminary abstraction of what to include. “I have an idea, then it will just come to me on the canvas.”
According to Al Mulla, he paints “under the influence of [his] whole life”. He said that all people are “accumulation of knowledge, experiences and culture” and he attempts to present his own through ambiguous thin and thick black lines against a once-vacant white space.
When asked whether he believes in Sufism, Al Mulla said, “People need to have the spirit of the Quran and the Hadith. In Qatar, nobody will ask you why you are Muslim, but we need to be more open to the good things in other thoughts and ideas.”
In addition to the personal motivations behind his art, Al Mulla said the controversy of the Sufi influence in his drawings helps with creating open-mindedness in Qatar.
The colourless nature of Al Mulla’s drawings makes them appear two-dimensional at a first glance. However, Al Mulla claims to hide philosophical messages in his long, contoured lines to prompt viewers to learn.
“People don’t need to change, but they need to read more and know more, and then judge,” he said. “I am opening the door for them to do that.”