At risk of extinction

January 8, 2019February 23, 2021 by milena rampoldi
The Kalash culture is on the brink of dying out. Today, Pakistan’s smallest ethnic group consists of only about 3,000 people.
The Kalash language is classified as being severely endangered. An estimated 3,000 indigenous people who live in the mountains of the Hindu Kush speak it. The language is the most important expression of a distinct indigenous group that has maintained its rich and unique form over millennia.
The Kalash people have held on to their religious beliefs, along with their own identity, way of life and language. Hidden up in the mountains near the Pakistani border with Afghanistan, the Kalash celebrate and dance for days and worship a number of gods. They produce their own alcohol, and Kalash women may choose whom they marry – lifestyle traits which set them apart in predominantly Muslim Pakistan.
Anthropologists, scientists and others have long puzzled over the antecedents of the Kalash, who are predominantly blue eyed and fair skinned. The most popular claim is that this unique tribe has Greek roots. After all, Alexander the Great conquered these lands over 2000 years ago, so it seems convincing that the Kalash are descendants of his Greek troops. The tribe certainly shares several symbols, rites, a potentially common history and perhaps even DNA with the ancient Greeks. Yet another hypothesis is that the Kalash is an Indo-Aryan tribe and may have arrived much earlier.
Surrounded by Muslim neighbours on all sides, the Kalash are the smallest ethnic group in Pakistan. Estimates vary, but census data suggest that their number has declined from 10,000 or so in the late 1950s to a mere 3,000 today.
A far remove from Islam
Kalash lifestyle and culture differs greatly from that of the neighbouring Muslim communities. The Kalash celebrate three festivals in a year. These festivals are celebrated over homemade wine and dancing to the sound of drums. They worship several gods and spirits, making offerings and sacrifices during the festivals. These are also occasions where young women and men choose their husbands and wives. 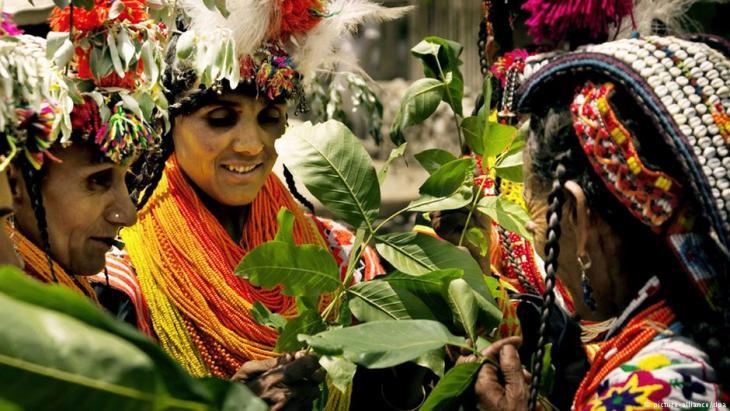 Endangered minority culture: the Kalash way of life differs significantly from neighbouring Muslim communities. The Kalash celebrate three major festivals a year, during which they dance to the sound of drums and drink homemade wine. They worship various gods and spirits and offer sacrifices and gifts to them at the festivals
Kalash women are not only allowed to choose their husbands, they can also divorce them and are even allowed to elope. At the same time, Kalash women are burdened with superstitious beliefs. For example, menstruating women are said to be impure and hence bring bad luck to the family if they are allowed to wander around. During menstruation Kalash women are housed in special accommodation. Each village features such provision, located at some distance from the residential quarters. This is just one of the many traditions that make them different to other ethnic groups in Pakistan.
The Kalash funeral tradition is also unique. Death is generally celebrated as a joyous occasion. It is believed that it is a union of the soul with the creator. Instead of mourning their dead, the Kalash give a farewell to the deceased by paying tributes with singing and beating drums. The dead are given food provisions for their final journey. Their possessions are laid beside them during the ceremony. These tributes last for days until the deceased are brought to their final resting place. In former times, the Kalash used to place their dead in coffins open to the elements, but with time they too began burying their dead. Funerals are an opportunity to display wealth, showing the importance of the deceased and his or her family. However, the funerals of men tend to be more elaborate.
A growing tourist attraction
This unique and striking culture, though hidden in the mountains, has started attracting an increasing number of tourists. The Lowari Tunnel, which is 10 kilometres long and links the districts of Chitral, where the Kalash live, to the district of Upper Dir is making a big difference. The tunnel was formally inaugurated in 2017. Better road access has led to an increase in local tourism. Moreover, modern supplies have become more readily available. The Kalash themselves, however, hardly benefit from related business as respective enterprises are controlled by non-Kalash people.
Discrimination against the Kalash runs deep. The 7.5 magnitude quake that struck parts of Northern Afghanistan and Pakistan in 2015, for instance, was blamed on the Kalash community’s “immoral ways”. Many people argue that the Kalash should assimilate.
Their traditions are actually becoming extinct fast. One factor is conversions to Islam. This was already happening in colonial times as depicted by Rudyard Kipling in the short story “The man who would be king”. Insanity and idol worship figure in it prominently. The location is Kafiristan, which means the land of the infidels.
The subject of Kipling’s story were the “red Kafirs”, who were brutally converted at the end of the 19th century and were then called Nuristanis, the “enlightened ones”. In Kipling’s time, the Kalash, who live in the same region, were known as the “black Kafirs” because of their typical black clothing. There have been media reports of forced conversions and of forced marriages with non-Kalash people. It is estimated that as many as 100 Kalasha have converted to Islam in recent years.
Kalash culture is also being eroded from within. Young people are adapting to new and modern ways. Many want to get a formal education and have professional career. Lakshan Bibi was the first from her valley to graduate. She became a commercial airline pilot. Wazir Zada is the first Kalasha to become member of the Provincial Assembly of Khyber Pakhtunkhwa, formerly known as the Northwest Frontier Province.
Culture under threat
Other issues that threaten the unique Kalash culture include illegal logging and land encroachment. This community is severely marginalised in economic terms. This is another reason why many Kalash people are abandoning their traditions, but they do not find acceptance in the dominant culture. If the course remains unchanged, only what is documented is likely to survive of their culture. It is therefore essential to record the customs and traditions that have been passed down orally. This knowledge is at risk and must not be lost.
Civil society organisations have been campaigning to get the Kalash culture included in UNESCO’s Intangible Cultural Heritage List. The process was initiated in 2008, but has stalled since. Pakistan’s government has also been making efforts to protect and preserve the Kalash culture. The authorities worry that it is under threat from exploitative tourism, which is set to get worse.
The constitution ensures equal rights to minorities and the law is designed to safeguard Kalash customs, which has helped centuries-old practices to survive so far. What matters most, however, is that some Kalash people are determined to keep their traditions alive – and their resolve seems to be strengthening.
Mahwish Gul
© D+C | Development & Cooperation 2019
Mahwish Gul is from Islamabad and studies development management at Ruhr University Bochum and the University of Western Cape in Cape Town. Her mastersʹ programme belongs to AGEP, the German Association of Post-Graduate Programmes with Special Relevance to Developing Countries.