‘It gets scary’: Indigenous schools feel heat in restive Mindanao

December 14, 2018February 23, 2021 by milena rampoldi
Martial law creating more problems for Lumad on troubled island as Philippine government battles Communist rebels.
Teacher Nerhaya Talledo was on her way to a remote village in the southern Philippines bringing supplies of rice, canned fish and noodles when her van was stopped at a recently-built military checkpoint.
A group of doctors and volunteers were in another truck with much-needed medicines.
The soldiers told them they couldn’t continue their journey to Sitio Dulyan, an indigenous village just half an hour away on the southern island of Mindanao, and would have to turn back.
“If we couldn’t get the food to Sitio Dulyan more than 120 Lumad (indigenous people) families would sleep on an empty stomach,” Talledo told Al Jazeera of the incident last month. “And the sick people wouldn’t get the medical attention they badly needed.”
The increasing militarisation of Mindanao following the siege of the city of Marawi last year has created more problems for the Lumad, indigenous people who live in the remote mountains and have often been accused of supporting the Communist rebels who’ve been fighting the government for decades.
Martial law, which President Rodrigo Duterte first declared on the island in May 2017, was set to expire this month but was extended by the Philippine Congress this week until the end of 2019.
“There are human rights violations,” said veteran politician and activist Satur Ocampo, adding that indigenous people were too afraid to complain for fear of retaliation. “That is why martial law keeps getting extended so they have the power [to] prevent these complaints from being exposed in public.”
Duterte’s administration says that while martial law has made “substantial progress” in addressing the unrest on the island, “public safety” required that it be extended.
Lumad schools have come in for particular attention amid concern they are recruiting grounds for the New People’s Army (NPA), the armed wing of the Communist Party of the Philippines.
The government suspended efforts to resume stalled peace talks with the NPA in July last year. 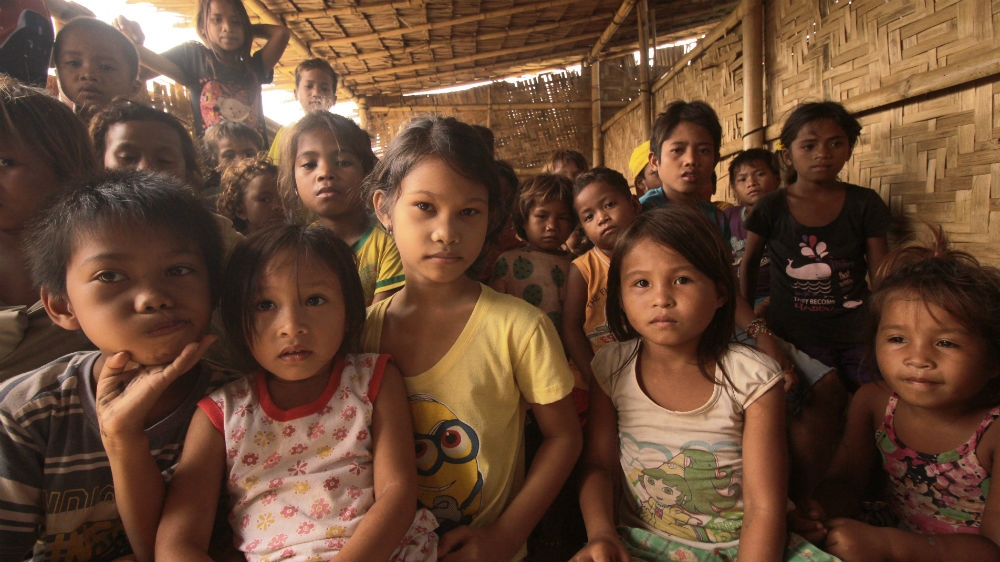 Lumad students of different ages are often taught together in a single classroom by one teacher because of the problems caused by the continuing instability in Mindanao [Jose Hernani/Al Jazeera]
‘Barely move’
Lumad villagers feel increasingly hemmed in by the military presence, according to Talledo.
“They could barely move there,” she said in a temporary camp where many Lumad are now living, as her phone kept buzzing with worried messages from people in Sitio Dulyan. “Even when they pee outside, they need to be hyper-vigilant. Sitio Dulyan is literally surrounded with soldiers.”
Between July 2016 to April 2018, the child-rights group Save Our Schools Network recorded almost 2,800 incidents of forcible evacuation of students and teachers, and 56 schools were forced to close, affecting more than 2,200 children.
The network of child-focused NGOs also found 30 incidents of the military camping inside schools.
The Philippine army declined to speak to Al Jazeera about the allegations. 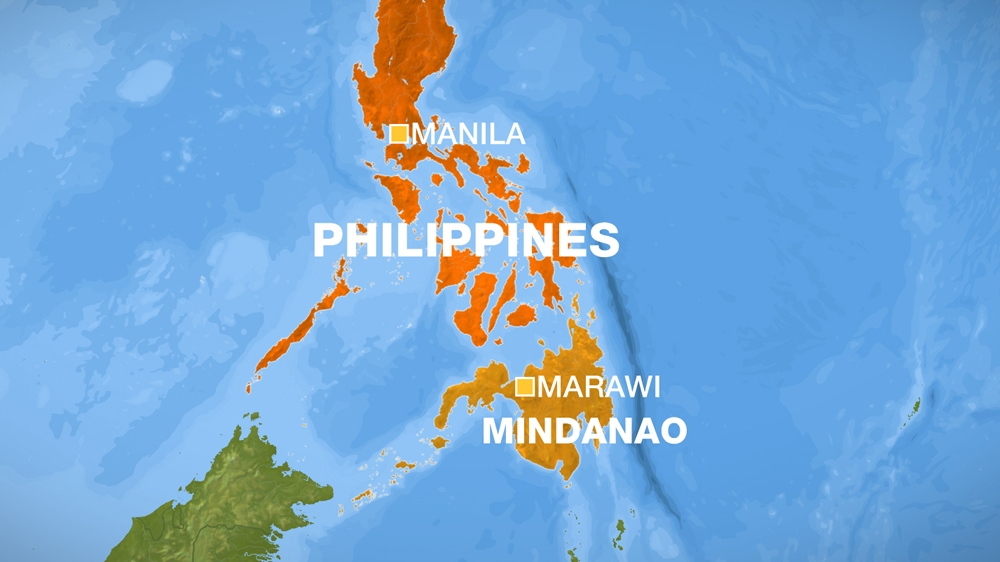 “They don’t want the Lumad to know their rights,” said Save Our Schools Network’s Rius Valle. “They don’t want them to learn how to read or write because they know this will strengthen them in defending their ancestral lands.”
Those ancestral lands include the Pantaron Mountain Range, which straddles six provinces of Mindanao, covering 1.8m hectares of woodland including the region’s last remaining old-growth forest. It’s also where Mindanao’s major rivers start their journey to the sea.
“Multinational companies are invading these lands for minerals like gold and massive logs,” Valle said. “This is something the indigenous tribes have been protecting for generations. They’ve been tricked countless times, made to sign papers they couldn’t read when what’s in the paper is an agreement that they’re giving up [a] portion of their land to whatever company is interested in it.”
There are few government schools in the remote areas where the Lumad live, which means indigenous children are forced to get up before dawn and walk for hours to get to class.
Organisations like San Francisco-based Salugpongan International set up schools in the mountains to help Lumad children get an education. They deny supporting the Communists.
The group operates 54 of its Salugpongan Ta’ Tanu Igkanogon Community Learning Centers, all of them accredited by the Department of Education, in Mindanao. 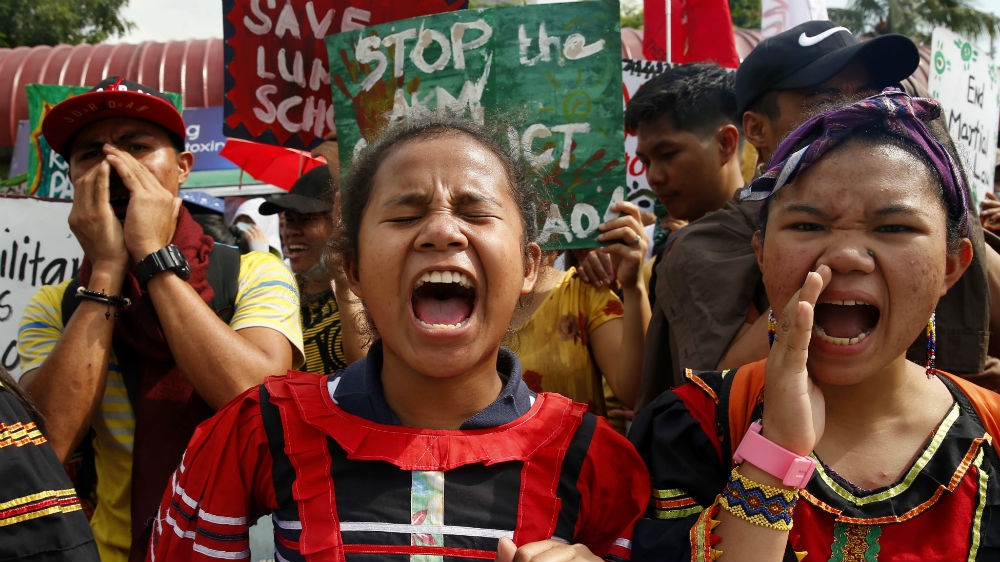 Indigenous people held a protest in Manila on December 10 to oppose plans to extend martial law in Mindanao [Bullit Marquez/AP Photo]
Soldiers in schools
Six weeks ago, some tribal leaders visited the community learning centre where Talledo was teaching. They were accompanied by four soldiers.
The men gave the teachers a letter and instructed them to vacate the building immediately.
A few days later they were back.
The soldiers took videos of the school.
“I asked who sent them but they wouldn’t tell,” Talledo said. “I asked repeatedly why they wanted the school closed (since) we’re teaching the same things as other schools. They said we’re just causing them trouble.”
The Lumad people suspected one of the men was an Alamara, part of an indigenous paramilitary group that has aligned itself with the army. The restive region has numerous militias, some of which side with the military and some with rebel groups, with allegiances shifting over time.
“The community have been warning us that the Alamara don’t believe in law,” Talledo recalled. “They’ll do whatever they want so when the men who came told us ‘If you don’t leave immediately, don’t be shocked if one of your teachers will get killed.’ I was alarmed.”
It gets scary sometimes, especially when the soldiers are very near.
CECILIA, 12, LUMAD SCHOOLGIRL
Twelve-year-old Cecilia was a student at one of the learning centres before she was forced to leave as the military closed in.
She loves school, but today is living at a temporary camp with her family, waiting for the tension to simmer down.
“I get to learn how to read and write and we’re given notebooks and pencils,” she said of the learning centre. “But it gets scary sometimes, especially when the soldiers are very near.”
In the three years Talledo has been teaching, she has lost count of the number of times her school has been threatened.
And she can recall only one week when the military was not close by.
“These Lumad children deserve the same kind of quality education as any one of us, and that’s what I’m trying to give them,” she said, trying to hold back tears.
“It is very upsetting that they’re treating us this way… as if teaching is a crime.”