December 6, 2018February 23, 2021 by milena rampoldi
According to prominent Turkish sociologist Nilufer Gole, many European countries have failed to integrate their Muslim and Turkish citizens.

In interview with Luca Steinmann, Gole argues that this has served to deepen social polarisation in Europe.
According to a number of analysts, Turkish President Recep Tayyip Erdogan wishes to be recognised as a leader not only by his citizens, but also by people of Turkish origin living in Europe, not to mention Sunni Muslims. What strategies could he use to try to bind European Muslims to Turkey??
Nilufer Gole: Migration movements in European countries are linked to a number of social and political issues that are specifically Turkish. In Europe, this applies most notably to the confrontation between Erdogan’s supporters and his opponents. It is not that there is no opposition against the Turkish president among Turks living abroad. We have been trying to answer the question as to whether and to what extent the government in Ankara assumes a leadership function for Turks living abroad for many years. It is a fact that Turkey exerts considerable soft power on many citizens of Turkish origin abroad.
This influence can be divided into two periods: between 1980 and 2010, the Turkish model manifested itself in the form of cultural festivals, television series, plays and various publications. Back then, Erdogan promoted this kind of soft power. In recent years, the Turkish model has taken an ethno-national turn, using Islam as a political instrument. These days we refer to it as “Sunnification”. How consistently the European Turks follow this model depends on how accepted they feel in the societies of the countries in which they live. The greater the degree of exclusion, the greater their openness to this ideology.
Gole: Many European countries have failed to integrate their Muslim and Turkish citizens. This opportunity has been missed. In 2010, the Turkish government began to pursue a transnational strategy. The difficulties in creating a synthesis between Muslim citizens and their European homelands is today bringing us growing mutual extremism: on the one hand, we find neo-populists dreaming of homogenous societies that exclude foreigners. On the other hand, the success of movements like Milli Gorus is growing. This movement is especially strong in Germany. It offers the Turks a nationalist perspective that is as dangerous as it is counterproductive.
The worse the situation regarding the inclusion of Muslims, the greater the chances of success of Milli Gorus are. Another mistake is the belief that a multicultural society can basically be created from scratch. But the road is long. The European societies and their citizens with a migrant background need to find their own way of living together.
Are there any successful examples of such original coexistence?
Gole: One example is the Central Mosque in Cologne, which was designed by well-known German architects Paul and Gottfried Boehm. They planned an independent building complex that fits harmoniously into its surroundings. This shows how new ways can be found for Christians, Muslims and atheists to live together.
The official opening of the mosque was, however, overshadowed by controversy, although a large number of people from Cologne were committed to the mosque. Another example are the films of the German-Turkish filmmaker Fatih Akin, in which he shows a new form of Europeanism based on interlinking the different identities of his protagonists.
The role of Mesut Ozil, a German football player of Turkish origin, who retired from the German national football team after he had himself photographed with Erdogan, came in for much discussion this year.
Gole: Ozil’s case is symptomatic. A successful German-Turkish public figure wants to be recognised as a German without having to give up his roots. His story shows how difficult it is in Europe to have different identities and affiliations, even if this is the case with many people – take the Jews, for instance. If we ask these people to give up their origins and in return assume the strong national identity of the country in which they live, this will lead to forced assimilation. 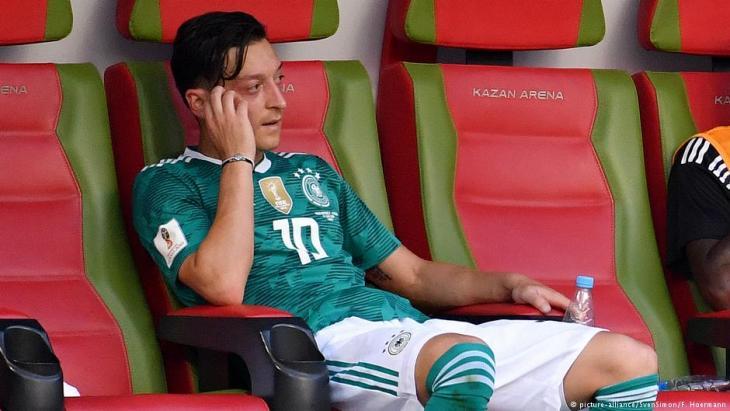 Football star Mesut Ozilʹs “scandalous” behaviour: as a result of the Erdogan affair, Ozil declared his resignation from the national team on 22 July 2018 and levelled serious accusations against the DFB and its president Reinhard Grindel. Ozil lamented their “racism and a lack of respect”
Instead, we need to find new forms of European citizenship that do not require us to give up our roots. Many people with a migrant background will otherwise feel excluded, as can be seen by the experience of young people in the second and third generations.
Migration flows also have an impact on the relationship between Europe and Turkey. The Turkish government is accused of using migrants as a means of exerting pressure on Europe.
Gole: Turkey has already welcomed more than three million Syrian refugees and made major humanitarian efforts. To assert that this is solely a matter of political calculation would not be fair. Turkey is currently facing its own delicate challenges with regard to the integration and assimilation of migrants. This is bound to put Turkish pluralism to the test. Migrants have changed the appearance of entire regions and cities. Many have opened new small businesses and have penetrated deeply into the local economy.
But this situation is slowly changing and the more the acute emergency subsides, the better the prospects are for Syrian refugees. Their success, however, could arouse racist resentment among the Turkish population. We are already seeing this today. Some accuse the government of taking more care of migrants than of locals. Immigration is also presenting Turkey with new challenges. It is no different in Europe. Both Turkey and Europe are basically faced with the same situation.
Interview conducted by Luca Steinmann
© ResetDoc 2018
Turkish sociologist Nilufer Gole is director of the “Ecole des Hautes Etudes en Sciences Sociales” in Paris. She has been charting the development of Islam in Europe for thirty years. Her primary research focus is on issues relating to the presence of Islam in the European public sphere.