Can a two-day conference solve the world’s migration issues?

December 9, 2018February 23, 2021 by milena rampoldi
The UN is urging member nations to reach an agreement in Morocco on a framework for global migration issues.
There were 258 million international migrants in the world last year, increasing almost 50 percent since 2000, according to the UN.
If all of the world’s international migrants lived in a single country, it would be the world’s fifth largest, according to a Pew Research Center report.
The number of migrants, representing 3.4 percent of the world’s population, is increasing faster than the global population, driven by economic prosperity, inequality, violence, conflict and climate change.
But the migration isn’t always safe, either during transit or once the country of destination is reached.
According to Missing Migrants, an IOM project tracking major migration routes around the world, more than 3,300 people have “died or gone missing in the process of migrations towards an international destination” in 2018.
Even in transit countries, or country of destination, racism, discrimination and human rights violations are continuously reported.
To ease problems and issues related to migration, an intergovernmental conference, with the aim of formally adopting the Global Compact for Migration (GCM), is taking place in Marrakech, Morocco, on December 10 and 11.
What is the GCM?
The GCM is a global agreement drafted after an 18-month long consultation period between the UN and various stakeholders, including government officials from member states, migrants, human-rights organisations and NGOs.
According to the UN, the GCM “compiles principles, rights and obligations from existing international law instruments regarding migration, and identifies best practices in all areas of migration”.
A non-binding agreement, it aims to better manage migration at local, national, regional and global levels, including reducing the risks and vulnerabilities the migrants face at different stages of their journey.
“This puts in place a framework for the future. The GCM has 23 objectives and we think by implementing them, there will be a rule of law, less abuse faced by migrants and better management of security and border controls,” Charbel Raji, a UN spokesperson, told Al Jazeera.
Who is not attending?
The pact was approved in July by all 193 member nations except the United States, which backed out last year.
Australia, the Netherlands and Austria are the only countries that have officially refused to back the GCM despite being part of the process.
In addition, Bulgaria, Hungary, Czech Republic, Poland, Slovakia, Estonia and Italy have either refused to attend the conference or ruled out signing the agreement.
“It is only regrettable that member states that engaged in the process will not be part of the event,” said Raji.
“Some of the reasons given are not even accurate, for example the pact not respecting national sovereignty. Migration policies for one country are not the same for another. The states remain free to determine their policies.”
What impact will that have on the GCM?
While UN officials are confident it won’t impact the outcome of the conference and what it aimed to get out of it, rights groups question why the organisation did not address the issue earlier.
“The US withdrew at an early stage and the UN was well aware of that and it still went ahead with the compact,” said Youssef Ait Akdim, board member of a Morocco-based rights group GADEM.
“We see many European countries withdrawing and stepping aside. I’m sure the UN is disappointed but the truth is that public opinion in European countries is very radicalized and the right-wing parties are very vocal.”
In the Netherlands, a recent opinion poll showed 41 percent of people are against signing the pact versus 34 percent in favour, according to Reuters news agency. 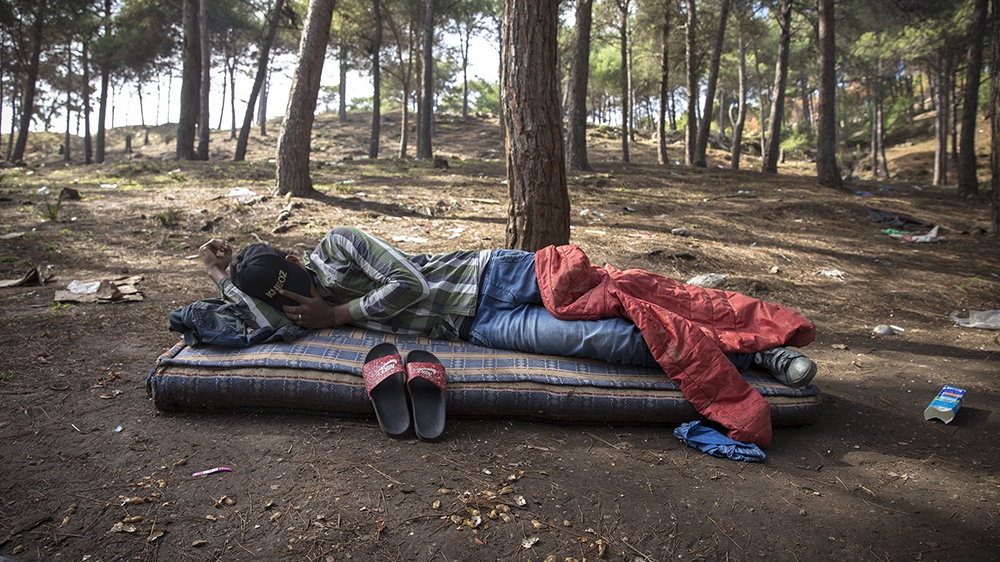 African migrants are coming to Morocco in increasing numbers, mostly to cross over into Europe [Faras Ghani/Al Jazeera]
Akdim revealed that Gadem had initially turned down the invitation to be part of the event as it did not see it resulting in a positive outcome for the migrants.
However, “a collective decision in the interest of the organisation” made them change their minds as “we did not want to be put in the same bloc of governments with nationalistic and xenophobic discourse on migration”, according to Akdim.
“This compact is not the kind of tool we like the UN to push but we believe it’s a compromise in trying to reconcile the vision of the South and the North.”
Will agreeing to the GCM solve the world’s migration issues?
In Marrakech, the UN is hoping that the discussions will “pave the way for concrete avenues for implementation”.
UN Secretary-General Antonio Gueterres has also decided to establish a new UN Network on Migration, “to ensure effective and coherent support of the UN System to governments in their implementation of the Global Compact”.
“This is the first time we have seen a global agreement to work together and provide the required elements that make migration safe and regular,” said Raji. “This is a big success by itself.”
Italy does not want the UN to be involved, insisting decisions over migration were a matter for national governments.
Estonia called the GCM “not an agreement in the sense of international law”.
Bulgaria is refusing to sign it as it believes the decision “protects to the fullest extent the interests of the country and its citizens”.
With the list of boycotting countries growing, the debate towards implementing the GCM by the end of the year could get louder.