December 10, 2018February 23, 2021 by milena rampoldi
As the UN Declaration of Human Rights turns 70, Kumi Naidoo discusses the state of women’s rights.
From campaigns to liberalise abortion laws in Ireland, Argentina and Poland, to the #MeToomovement and the controversy over the confirmation of Court Justice Brett Kavanaugh in the United States, women’s rights issues made headlines around the world in 2018.
But, despite the increasing visibility, gender equality remains illusive for the majority of the world’s women.
As Amnesty International releases on Monday its annual review to coincide with the 70th anniversary of the Universal Declaration of Human Rights on Monday, Al Jazeera speaks to the rights group’s recently appointed Secretary-General Kumi Naidoo about a year defined by women’s rights activism and what still needs to be done.
Al Jazeera: Why did Amnesty choose to make women’s rights the focus of the report this year?
Kumi Naidoo: What we’ve seen over the last year has been a concerted effort to attack women’s rights in many places.
Many so-called “tough guy” leaders are pushing a sexist, racist and homophobic political agenda.
In Brazil, [President-elect] Jair Bolsonaro has publicly taunted women about rape and laughed in the face of those pushing for equal pay. We’ve also seen in places like Poland and Guatemala lawmakers advocating much stricter abortion laws.
The second reason is that women-led movements have really dominated the public space in the year that has passed. In Latin America, the “Ni Una Menos” movement galvanised people taking action and fighting back against bigotry.
In India, Spain and South Africa, female activists have organised mass rallies in protest of unjust state laws and sexual abuse, as well as violence against women.
In Saudi Arabia, female activists have protested against the driving ban, and in Iran women have come out against the wearing of the veil.
Women are showing the kind of resilience that we need moving forward to address human rights in a world which is moving in the wrong direction.
KUMI NAIDOO, AMNESTY INTERNATIONAL SECRETARY-GENERAL
The third reason is that at a time when there is a sense of doom and gloom, because the climate scientists have told us we’ve got 12 years to turn things around and we’re fast running out of time, there’s deep inequality and fascism is rising – what women have showed is a very high level of resilience to injustice and the ability constantly to fight.
Women are showing the kind of resilience that we need moving forward to address human rights in a world which is moving in the wrong direction.
Al Jazeera: Why do women’s rights continue to come under threat despite protection from the Universal Declaration of Human Rights as well as, in many cases, national legislation?
Naidoo: Firstly, there’s a very high lack of compliance with commitments that governments make at various United Nations summits. Governments say things that they know people want to hear, that will make them look good, and hope that by signing such commitments they give an indication that they’re going to address human rights generally and women’s rights specifically.
In reality, there has not been the kind of political will to move the women’s rights agenda forward. Part of the reason for that is that there is such low levels of female representation in political life as well as in the business community.
It’s the 70th anniversary of the UN Declaration of Human Rights, but sadly, today, if we tried to get the governments of the nations of the General Assembly to agree to the declaration, they wouldn’t be able to.
Eleanor Roosevelt, the first US ambassador to the UN, played a big role in drafting the declaration but today [President Donald] Trump would be one of the biggest opposers of that deal.
Al Jazeera: What has been the most pressing women’s rights issue this year?
Naidoo: There have been several, but I would say the challenge that refugee women have been experiencing in Europe and the United States. I think one of the most devastating violations of human rights we’ve seen is the separation of families at the border between the US and Mexico when people have been seeking refuge.
In general, the way countries have been responding to the refugee crisis has been lacking in morality and human compassion. 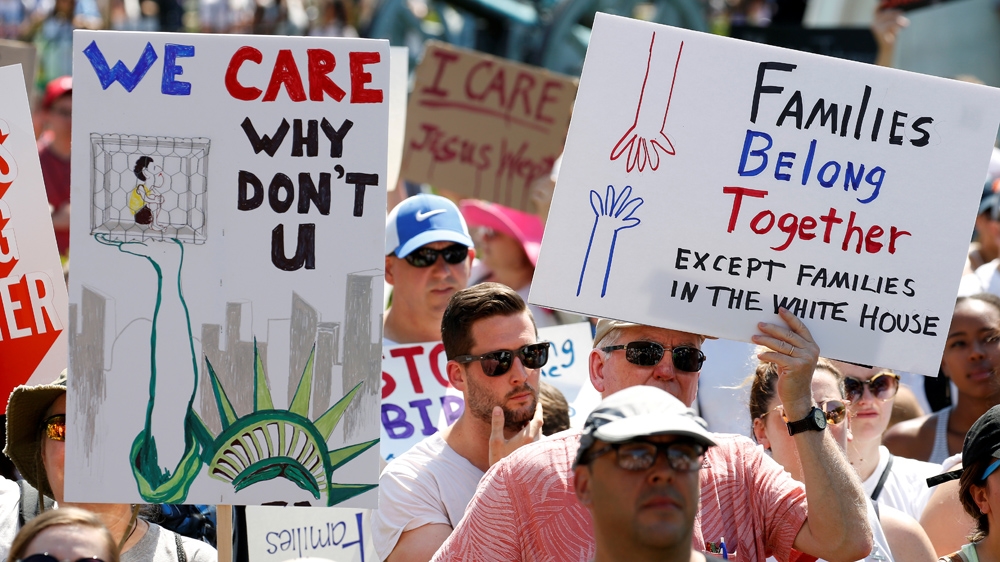 Thousands of children were separated from their parents at the US-Mexico border after the Trump administration cancelled its family separation policy [File: Joshua Roberts/Reuters]
Al Jazeera: Where have you seen the most striking developments both positive and negative?
Naidoo: One of the most inspiring developments was Ireland holding the [abortion] referendum. Many people always used to say that because of religion and other political factors, the people of Ireland won’t vote for the rights of women to choose and take control of their reproductive rights. So it was a very inspiring victory to see them defy conventional wisdom and, in a significant majority, vote for respecting women’s right to choose.
On the negative side, what stands out is that in virtually every struggle that is non-gender or non-women focused, whether you take climate or poverty or [other forms of] inequality, what we have noted is the number of women not yet having actual parity with the men involved in these movements.
However, we have seen women asserting their leadership and increasing their participation and we at Amnesty sincerely want to support this – and that is part of the reason we’re highlighting amazing women and social justice movements.
Al Jazeera: How would the world benefit from gender equality?
Naidoo: Nelson Mandela used to say white people will never be fully free until black South Africans are free. I would say similarly that men will never be fully free until women enjoy full gender equality.
To ensure that people are not deprived of basic rights is a critical success factor for any society because if you are marginalising more than half of the population – at least half of the people in the world are women – you are marginalising the talents of more than half the population in all sorts of ways.
In terms of the economy, there is no question that if women are empowered with skills and possibilities to participate, they can make major contributions to building an economy that is more inclusive, more just and more equitable.
Today, if we tried to get the governments of the nations of the General Assembly to agree to the Universal Declaration of Human Rights, they wouldn’t be able to.
KUMI NAIDOO
Also, if you empower women to have control over the number of children they have, this means they have more choices in terms of career paths, leisure activities, cultural activities and so on.
For some of the biggest challenges that we face – for example inequality and climate change – I have no doubt that without women actively fighting and participating – and not only participating but taking a leadership role – in these agendas, we will not succeed in addressing the real threat of climate change that threatens the very survival of humanity on this planet.
Al Jazeera: What can be done to target gender inequality?
Naidoo: There are three levels of interventions we can make. At a micro level, ensuring we have the right kinds of projects, programmes and facilities to support women.
At a policy level, it’s working for much better pro-women policies on everything from domestic violence legislation to ensure female entrepreneurs have equal rights.
At the level of governance, it’s ensuring that our governance systems are not discriminatory and are encouraging the participation of women in public life. These are the things that we need to be working for.
Editor’s note: This interview has been edited for clarity and brevity