October 17, 2018February 23, 2021 by milena rampoldi
Young people in the MENA region today are better educated than their parents’ generation. But higher educational attainment does not open doors to better jobs. Many youngsters go from university straight into unemployment.
The MENA region has the highest graduate unemployment rate in the world. In 2016, around 42% of those leaving higher education in Egypt, for instance, failed to find employment. There is a yawning gap between supply and demand in the labour market. School-leavers choose learning paths in further and higher education on the basis of the prestige associated with them and not the job prospects they offer.
As a result, universities year after year produce a host of humanities and social science scholars who do not have the slightest chance of getting a job. The number of students who opt for scientific and engineering disciplines is significantly smaller.
Whether they have studied social or natural sciences – graduates normally have not developed skills that an up-to-date knowledge economy needs. They are neither computer savvy nor have they developed their capacity to solve problems creatively. Instead, they have been taught to give the correct answers to pre-defined questions.
Independent thinking and a willingness to get involved in messy real-world problems would help graduates to prove their worth in the private sector. Such attitudes, however, are largely discouraged in the universities’ ivory towers.
Lacking practical professional experience
Skilled industrial workers are in particularly short supply and vocational training capacities are limited. Most MENA countries in recent years have redoubled their efforts to upscale vocational training but few have had much success, as evidenced by a number of country-wide evaluations. 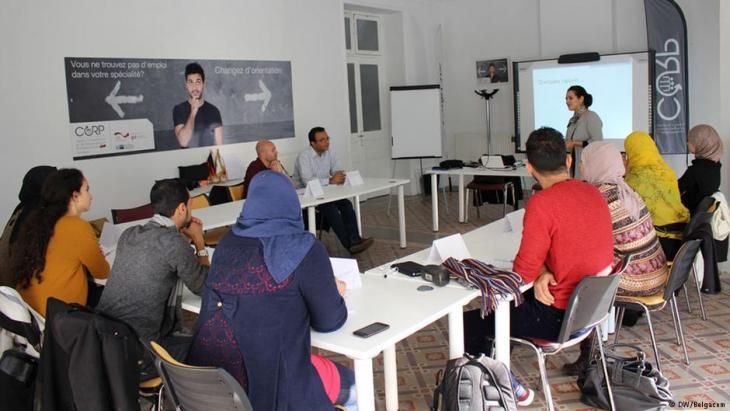 Lacking a needs-oriented education policy and diversification: according to international comparative studies, almost all MENA countries demonstrate below-average results. Education and vocational training systems continue to focus on the public sector, which is partly due to the history of state-controlled economic development
Jordan failed to reach the targets it set, for example, because the training offered lacked practical relevance and the private sector was not sufficiently involved. Companies themselves are hardly proactive. The number of firms offering formal training in the MENA region is lower than anywhere else in the world.
The situation is made worse by the fact that the quality of teaching at all levels is generally low. According to comparative international studies, nearly all MENA countries achieve below-average results. Education and vocational training are still geared to public service. This is partly because of a history of state-controlled economic development and partly because for a long time the state employed a large proportion of the workforce. The ultimate outcome: lower productivity and efficiency in both the private sector and public administration.
Regional discrepancies
To escape this trap, most countries in the MENA region have adopted plans to promoted digital compentencies. Their starting points are quite different however.
The oil-rich Gulf monarchies have been making headway in terms of building broad-band infrastructure and the vast majority of the people there use the internet. The aspiration is to become global hubs for high technology. They are investing massively in updating vocational training to achieve that goal. So far, however, they must still rely on experts from foreign countries.
Countries in North Africa and the Levant, by contrast, do not have the resources their richer neighbours have. Moreover, political instability and problematic governance make it hard them to adapt to digital change.