September 28, 2018February 23, 2021 by milena rampoldi
The World Food Programme (WFP) has said there “very well could be” famine in remote areas of Yemen where the UN’s food agency does not have access, painting a bleak picture of the hunger crisis gripping the country.
“Yemen is a disaster and I don’t see any light at the end of the tunnel right now,” WFP’s Executive Director David Beasley told reporters at a closed briefing during the UN General Assembly in New York City on Thursday.
The WFP has warned that Yemen is on the brink of a full-blown famine, with 18 million of its 29 million population food insecure, 8.4 million severely so.
The country’s civil war further worsened in the wake of Saudi-led military intervention in 2015, which has ravaged the country’s economy and caused the Yemeni riyal to collapse, depreciating 180 percent.
The cost of food has increased by 35 percent in the last 12 months and if trends continue the riyal will reach an exchange rate of 1,000 to the US dollar, putting 12 million at risk of starvation, UN officials have warned.
“Yemen is undeniably the world’s worst humanitarian crisis by far,” said Beasley. 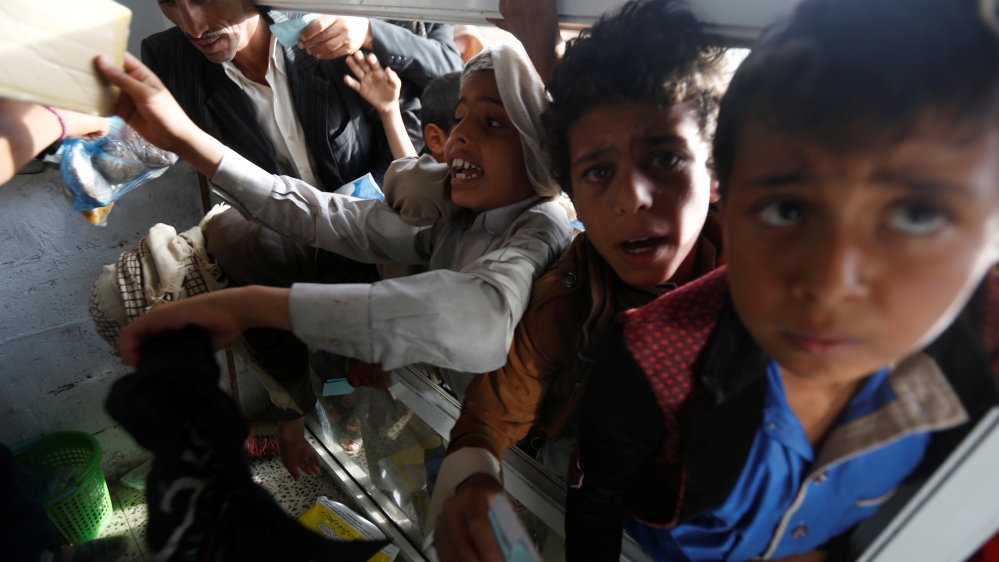 The three-and-a-half-year-long civil war has ravaged the country’s economy [Khaled Abdullah/Reuters]
Access into the country, controlled by the Saudi-led coalition, has “substantially improved” in the past year, but denial of access within Yemen remains the major obstacle to fighting hunger and disease, especially in areas controlled by Houthis, he added.
“If we don’t have access then we can’t monitor [and] draw necessary conclusions. We have to assume the worst.”
An Associated Press investigation found that some families in the northern, Houthi-controlled area of Aslam were found eating leaves to survive after the distribution of food aid was manipulated by local authorities.
Blockade
The situation is especially critical in and around the port of Hodeidah, where the Saudi-led alliance is advancing to take the port city, which has been under Houthi control since late 2014.
Civilians there are the most vulnerable in the country, according to the UN.
Beasley said the agency has received assurances from all parties to the conflict in Hodeidah that the lifeline port will remain open at all costs, but that the WFP is making alternative arrangements in case it should close.
About 70-80 percent of the country’s food and medical supplies arrive onto its docks.
He also accused Houthi rebel forces of “breaking every human principle imaginable”, including impeding the delivery of food supplies and using weapons at UN warehouse facilities.
The statements mark a shift in tone for Beasley, who last year assailed Saudi Arabia for its blockade of Yemen and especially Hodeidah port, telling Reuters news agency that the Kingdom should pay 100 percent of the burden of humanitarian relief.
The change mirrors a meeting on Monday where UN Humanitarian Coordinator for Yemen Lise Grande told agency heads, member states and NGOs that “it is a grim but wholly unshakable fact that we are losing the battle to prevent famine in Yemen”.
Grande and other humanitarian officials then thanked those donating towards the crisis, including Saudi Arabia and the UAE, the leading members of the military alliance which UN experts have said may be responsible for war crimes.
Airstrikes by the Saudi-led coalition have hit markets, hospitals, homes and funerals and are the cause for most direct civilian casualties in the war, according to a recent report.
In response to the meeting’s dire updates on hunger and poverty, Yemen Foreign Minister Khaled al-Yamani, UAE Minister for State Reem Al-Hashimi and Saudi Ambassador to the UN Abdullah al-Mouallimi in turn called for more condemnation of Houthi rebels from the UN and the international community.
“We must always remember that the catastrophe was saved due to the generosity of the donors,” said al-Mouallimi. “I don’t know any war in the world where the war was conducted with such a strong humanitarian dimension.”
Yemen response
More than half of the $1.97bn raised for the UN’s Yemen response has been donated by Saudi Arabia and the UAE.
Contributions by those countries’ allies including Kuwait, the US and UK, mean that 80 percent of the funds are provided by the military coalition and its backers.
“During the UN meetings, Yemen’s government officials appeared to be more occupied with participating in anti-Iran meetings and opposing Iran publicly rather than generating solutions to Yemen’s economic collapse and the intensification of the humanitarian crisis,” said Sama’a Al-Hamdani, Yemen analyst and visiting fellow at Georgetown University.
Al-Hamdani said the week’s discussions saw no serious decision to move from hostilities to negotiation, minimal action on stopping the battle for Hodeidah, and no mention of the Yemeni government’s need to return to liberated areas.
“This determination to keep the war is alarming since civilian life is not respected in this conflict.”