September 10, 2018February 23, 2021 by milena rampoldi
The Salam Sisters dolls, which have rearrangeable hijabs, are loosely inspired by real-life Muslim women.
A Dubai-based company has created a set of dolls that it hopes inspires young Muslim girls to take pride in their faith and become community leaders.
The five Salam Sisters dolls were designed by Zileej, a faith-based creative company, to help Muslim girls feel connected with their roots and comfortable in their identities. The very first shipments of the dolls were sent out to customers in mid-August, the company said.
“We want young girls who don’t often see their cultural identities and faith represented in a relatable way to know that they can be proud of their backgrounds,” said Ansarullah Ridwan Mohammed, co-founder of Zileej. “We want them to see that all of who they are is uniquely beautiful — even when it sounds like the world is telling them that they don’t have the perfect hair, or skin color, or size, or religion.”

SALAM SISTERS / ZILEEJFrom the left, the five Salam Sisters dolls are Layla, Karima, Yasmina, Nura and Maryam.
The Salam Sisters represent various racial and ethnic backgrounds ― showcasing the incredible global diversity of the world’s roughly 1.8 billion Muslims.
The dolls were given a wide range of interests and aspirations, including journalism, astronomy, art, history, sports and social leadership. There’s Karima, who loves playing tennis and learning about outer space. Nura is described as an aspiring scientist who is also working hard to memorize the whole Quran. Layla is a budding fashion designer and gardener.
The dolls’ personalities and backstories were inspired by examples set by real Muslim women ― including Yassmin Abdel-Magied, an outspoken Australian Muslim activist. Abdel-Magied didn’t play an active role in the creation of the Salam Sisters, but some elements of the activist’s personality were incorporated into a doll named Yasmina. The character is described as a photojournalist and leader who likes to fundraise for charities.
The idea for Salam Sisters started with Zileej’s co-founder Peter Gould. He was looking for dolls for his two young daughters that would help them feel empowered and connected to their family’s Muslim identity.
“He wanted to create representative toys that they would love,” Mohammed recalled. “With messages and stories that would inspire them to become leaders, and encourage them to boldly make positive contributions to the world.”
The Salam Sisters dolls are currently being sold online to customers in the U.K., U.S., Australia, and South Africa. The company hopes to open sales up to Canada, the Gulf states, and other countries in Europe and Africa in the near future.
The dolls have come out on the market during a time when Muslims in Western countries are reporting high levels of Islamophobia. In particular, American Muslims whose clothing or appearance identifies them as Muslim are more likely to say they’ve experienced discrimination. Nearly two-thirds (64 percent) of visibly Muslim respondents told the Pew Research Center in 2017 that they’ve experienced at least one instance of religious discrimination in the past year.
Surveys have shown that Muslim children aren’t exempt from discriminatory attitudes. The Institute for Social Policy and Understanding, a research firm that focuses on Muslim American issues, found in 2017 that Muslims were about four times as likely as the general public to report that their school-aged children were being bullied.
A 2016 survey of 1,041 Muslim students in California also revealed evidence of bullying. The study, conducted by the state’s chapter of the Council on American-Islamic Relations, found that 53 percent of students reported being made fun of, verbally insulted, or abused for being Muslim. Thirty-six percent of respondents who wear the hijab reported offensive touching, including having had their headscarves tugged or pulled. 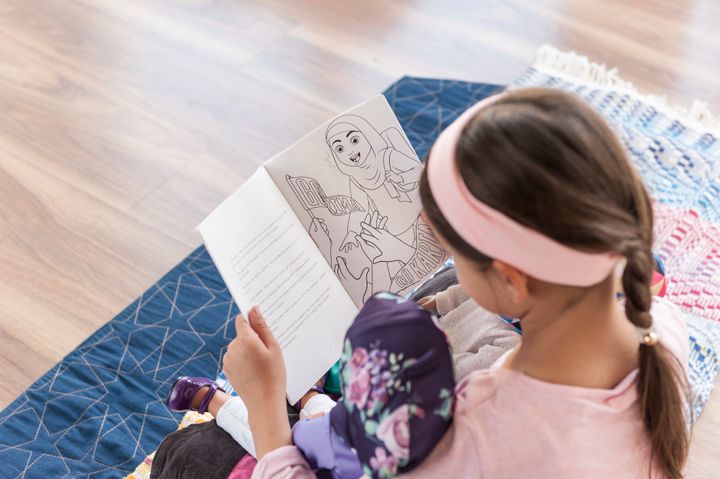 SALAM SISTERS / ZILEEJThe Salam Sisters dolls come with a storybook, headscarves and hairbrush. The dolls are also have an accompanying app with augmented reality features.
All five Salam Sisters dolls have headscarves that are removable and rearrangeable. Each doll comes with one scarf that is pre-styled and can be fixed in place with velcro, and another loose scarf that encourages girls to experiment with different styles.
Subhi Bora, Zileej’s creative team director, told HuffPost that it was important to the team to show young girls that wearing the Islamic headscarf can be a beautiful and deeply personal choice.
“This flexibility reflects the lived experience of Muslims across the world, who have been choosing to style their headscarves — and their hair — in ways that are inspired by a kaleidoscope of different cultural influences,” Bora said.
Mohammed said that one of Zileej’s main goals for Salam Sisters is to help young Muslim girls realize that “the world is equally theirs to experience as completely as possible and that their voices not only matter, but must be heard.”
“We would love for all people who see the Salam Sisters to take home the message that having a welcoming mindset to diversity is a beautiful thing,” Mohammed said.