“Integration is the least of our problems”

Mangoes from Pakistan are being sold at the bazaar. Two men, who have just bumped into each other, hug each other next to the stand. Everyone seems to know everyone, whether from Africa, Canada or Pakistan. You can see the excitement in the eyes of a young mother in traditional Indian clothes, the shalwar kameez.
Networking, exchange, spirituality. These form the primary focus of the meeting. But matchmaking among the younger generation is also a feature. Many spouses and their families meet for the first time in the corridor between the menʹs and womenʹs areas. Thatʹs the way he got to know his wife, says Ferhad Ghaffar. The imam from Wiesbaden is annoyed by the one-sided image conveyed by the media: “The emphasis in the media is always on how conservative we are, how we follow strict gender separation.” Yet there are many other aspects one could choose to highlight.
Islamic reform movement with gender segregation
The Ahmadiyya regards itself as an Islamic reform movement. It was founded in 1889 in British India by Mirza Ghulam Ahmad, who called himself the Messiah. The largest Ahmadiyya communities continue to exist in Pakistan and India. In 1974, however, tens of thousands of Ahmadis were forced to leave Pakistan after the state declared them non-Muslims. They are still not recognised as Islamic by any Muslim authority and are mostly seen as a sect.
Ahmadiyya communities exist in most countries. Many of them maintain good relations with the world of politics and the media. In Germany, the Ahmadiyya is the only Muslim organisation to enjoy the same legal status as that of the established Christian churches – even if only in Hesse and Hamburg.
But the much vaunted openness of the Ahmadiyya obviously has its limits. German Ahmadiyya Muslims charged with registering conference delegates sit in front of their laptops. Some of them lower their eyes when faced with a female visitor, refusing to look at them directly, even when conversing – an attitude that confuses some guests. 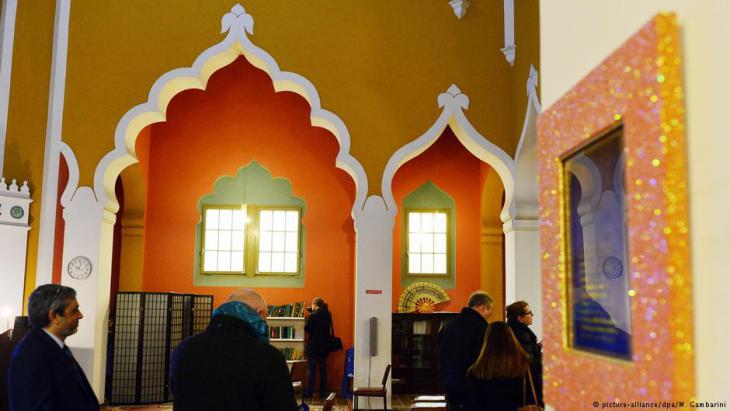 Pious and conservative: the Ahmadiyya community in Germany has, according to its own information, almost 50,000 members and over 50 mosques. The Ahmadiyya community was founded in India in 1889 and considers itself to be “liberal, but traditional in its values”. The community therefore speaks out against homosexuality and rejects any physical contact between man and woman outside marriage. However, there are no secular punishments for non-compliance with Islamic duties
Not so for Samera Cheema from Ludenscheid. She is a member of the women’s branch of the Ahmadiyya. The organisation is independent of the men, thus enabling the women to develop. “Around men, youʹre always getting looked at. Personally, I feel far more comfortable,” says Cheema.
As discussions about headscarf-wearing became a hot topic in the media, the Ahmadiyya community decided to take the initiative: Ahmadi women approached their fellow German citizens and offered to answer any questions they might have. “I feel it is my duty to counter prejudice,” explains Samera. “We have to inform people.”
Interfaith dialogue
Modood Alvi is software engineer by profession. He has been visiting the annual meeting of the Ahmadiyya for many years and enjoys the sense of cohesion. And what about more worldly topics? “We talk about how Muslim life can find a place in German society. I feel absolutely German”. German Ahmadis do not question their affiliation to Germany. The alarm caused by incidents like the one in Chemnitz is therefore all the more understandable: “We are constantly being confronted by peopleʹs deep-seated reservations.”
Unlike Modood, Heike Obregon has only noticed the Islamophobic mood through the media. Although, as she says, she works on the Ahmadiyya information stand in Hanover at least once a week. She has been an Ahmadi Muslim for 30 years, but it has always been important to her to make contact with non-Muslims: “It is what Islam dictates. It is said that when someone greets you, donʹt say you are a different believer, but treat people as your equal and talk to them accordingly.” 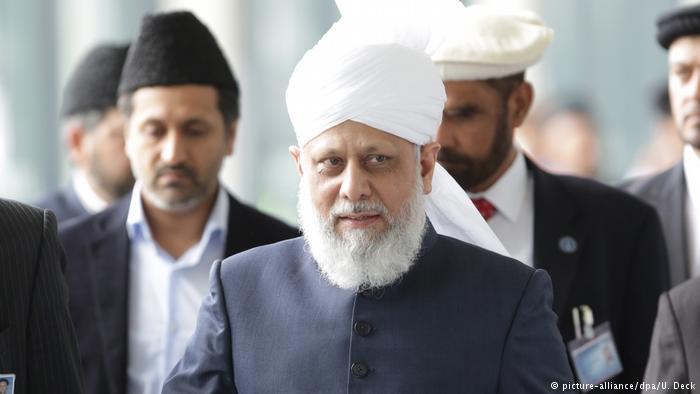 Caliph commands international respect: Justin Trudeau, Theresa May and Martin Schulz have all welcomed Imam Ghaffar on his visits to their respective countries. Germanyʹs Minister of Justice Katarina Barley attended this yearʹs Jalsa Salana. The Ahmadiyya congregation is a public entity in Hesse and Hamburg and thus enjoys comparable status with that of the established churches
The Karlsruhe exhibition grounds are immense. The area of the four exhibition halls and the open-air grounds corresponds to around 16 football pitches. But the site, where the community has met annually since 2011, may soon become insufficient for the conferenceʹs needs. This is because the congregation is growing, in part due to the Ahmadisʹ active missionary activity.
That’s why the Ahmadiyya community is now looking for a new place in the Rhine-Main area, because that’s where most members go, Imam Ghaffar explains. But even if the doors are open to everyone, people don’t just wander in. It is becoming more and more difficult to defend Islam, he says: “Islam has been dragged through the mud by a few people. But we have to stay positive .” Instead of simply relying on the media, people should draw their own conclusions about who Muslims are and what their faith stands for, he says.
A highly structured community
While everyone waits with bated breath for the arrival of the spiritual leader, the imam explains the tight structure of the Ahmadiyya: departments and offices at international, national, regional and local levels. “We already have 52 mosques in Germany,” says Ghaffar, and of course the Jalsa Salana is also one of the communityʹs major organisational achievements. “Security services, stewards, registration, electricians, drivers – everything is voluntary and unpaid.”
Above all: the caliph issues direct instructions. One of them: “everything here is in German.” The Ahmadiyya community, says Ghaffar, is more educated than the average German: “Integration is the least of our problems.”
For Rohma Pasha from Hamburg, the visit of Caliph Mirza Masrur Ahmad is the highlight. She is hoping for a private audience with the spiritual leader of the global community. But the rush is huge. An hour before the caliph is due to speak to the non-Muslim guests, the believers are already crowding to see him.
The caliph is world-famous. Justin Trudeau, Theresa May and Martin Schulz have all welcomed him on his visits to their respective countries. Minister of Justice Katarina Barley from the SPD attended this yearʹs Jalsa Salana.
When the caliph finally arrives a few minutes after 4 p.m., things calm down. All eyes are on the man with the white beard. His message in Karlsruhe: Islam means peace. Refugees should be grateful to Germany and give something back to the country. A large banner is emblazoned with the message “Love for all, hate for no-one”.