September 20, 2018February 23, 2021 by milena rampoldi
What a contradiction in terms! Thanks to the growing ethnicisation of religious affiliation and the religionisation of ethnicity, being both Muslim and German is often presented as something wholly incompatible.
On 14 March 2018, the Central Council of Muslims in Germany announced that it would be closing its head office after repeated death threats against its chairman, Aiman Mazyek, and other members of staff. This announcement was just the tip of the iceberg in terms of attacks on Muslims and their places of worship. In 2016 alone, German authorities recorded 91 attacks on mosques – that’s more than one a week.
Even though most documented anti-Muslim criminal offences are committed by right-wing extremists, negative and derogatory attitudes towards Islam and Muslims are a widespread phenomenon, not only in Germany, but in all European countries.
This claim is backed up by analyses of the political and media discourse and also by countless representative studies that have been surveying public opinion for the past few years. For example, about 60 percent of Germans agree that Islam does not fit in the Western world[1], and 38 percent agree that a woman in a headscarf cannot be German[2]. In 2016, one in two people said that Muslims made them feel like “strangers in their own country”.[3]
Yet these hostile attitudes are not new; they also existed before the so-called “refugee crisis”. In a 2009 study conducted by Andreas Zick and Beate Kupper of the University of Bielefeld (published in 2011), 44 percent of those surveyed said that there were too many Muslims in Germany.[4]
Islamophobia is a major cohesive force for right-wing populism, which has gone from strength to strength across Europe. Political parties like the AfD in Germany, Sverigedemokraterna in Sweden, the Front National in France, the FPO in Austria, the SVP in Switzerland, Vlaams Belang in Belgium, the Partij voor de Vrijheid in the Netherlands and the Lega Nord in Italy are using the general mood of the population to make their policies attractive and acceptable to the so-called “centre ground” of society. Their successes at the ballot box prove that this strategy is working. The anti-Muslim rhetoric is used by these parties as a modernisation strategy and has in many places replaced the old “foreigners out” slogan. As part of this strategy, Muslims are declared an “unintegratable” minority and are side-lined as “outsiders inside” Europe. 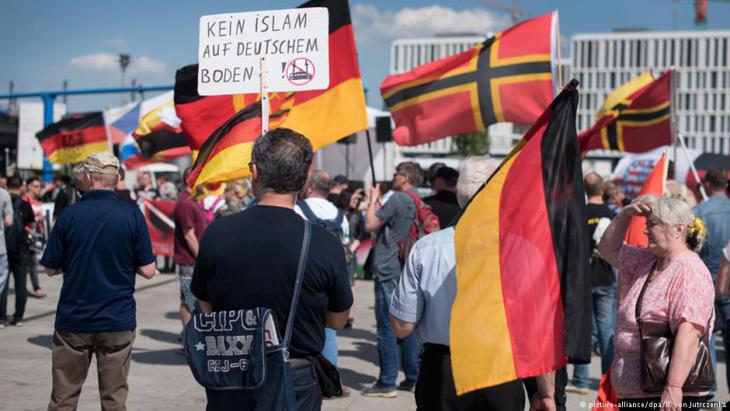 Stigmatisation within a systematic paradigm shift: anti-Muslim rhetoric is being used by Europeʹs right-wing populists as a modernisation strategy and has in many places replaced the old “foreigners out” slogan. As part of this strategy, Muslims are declared an “unintegratable” minority and are side-lined as “outsiders inside” Europe
The ethnicisation of religious affiliation
The focus on religious affiliation is the result of a shift in perception and an Islamisation of the debates about migration and integration that has led to sections of the population previously regarded as either guest workers or foreigners increasingly being viewed as Muslims. As a result, religious affiliation is becoming ethnicised, which is why one can also speak of “anti-Muslim racism”.
There is widespread agreement within the field of racism research that even though the term “race” became increasingly taboo as a result of National Socialist crimes, its power to have a social impact has not decreased at all. Indeed, its ideological content continues to be transported using other terms and codes.
That is why, for more than 20 years now, there has been an increasing shift from racism based on biologistic arguments to racism that is founded on cultural aspects, of which anti-Muslim racism is one kind. Anti-Muslim racism is based on the notion that Muslims are a homogenous group to which certain (generally negative) collective properties are ascribed and which is seen as not belonging.
It is not just practicing Muslims who are affected by this marginalisation, but also people who are “labelled” Muslims because of their appearance or their names – regardless of whether they themselves identify as Muslims or not. Thanks to the growing ethnicisation of religious affiliation and the religionisation of ethnicity, being both Muslim and German is often presented as something wholly incompatible.
The role of religion in anti-Muslim racism
But what role does religion actually play in anti-Muslim racism? It is noticeable that a rhetorical “indirect communication” that ostensibly attacks Islam only is sometimes used as a way of shaking off the accusation of racism. A clear example of this is the way that right-wing populists describe themselves as “critics of Islam”.
They use this neologism to justify their hostile, anti-Muslim sentiments as a form of religious criticism, whereby the lack of analogous composite terms such as “critic of Christianity”, “critic of Judaism” or “critic of Hinduism” is an indication that Islam is being singled out and that the aim here is not a general criticism of religion.
As with all other monotheistic religions – which are built on a claim to the truth and have patriarchal structures – it is, of course, legitimate to criticise Islam. The reference to egalitarian arguments alone, such as active support for the rights of women and homosexuals, is not enough to differentiate between legitimate criticism and a hostile attitude. What is needed is a much more detailed analysis of the respective context in which the criticism is expressed – by whom and with what motivation? – and the function of an argument in this context.
No one who is willing to look at both history and the present can deny the repressive potential of religions. However, seeing this repressive potential in Islam alone is an indication of the application of double standards, which is an important criterion when differentiating between sober criticism and hostile attitudes. If, in addition to this, emancipatory arguments are used to justify the discrimination and marginalisation of Muslims, it is clearly a case of an attempt to use human rights to legitimise racism.
Double standards
At PEGIDA demonstrations, for example, people held up placards that read “Islam = carcinoma”. In short, Islam was being equated with a deadly disease. However, because “Islam” is not a social player, this raises the question as to whether, when their religion is being attacked pars pro toto, Muslims are in fact the actual target of this slur.
The debasement and rejection of the Islamic faith has above all consequences for those people who are seen as Muslims when the term “religion” is used in a deterministic way and their general and, in particular, negative behaviour is interpreted in the light of actual or attributed affiliation to a religion. In such cases, the “integral properties” of Islam that are being criticised lead to notions of collective characteristics of “Muslims” without any major break in the argumentation. 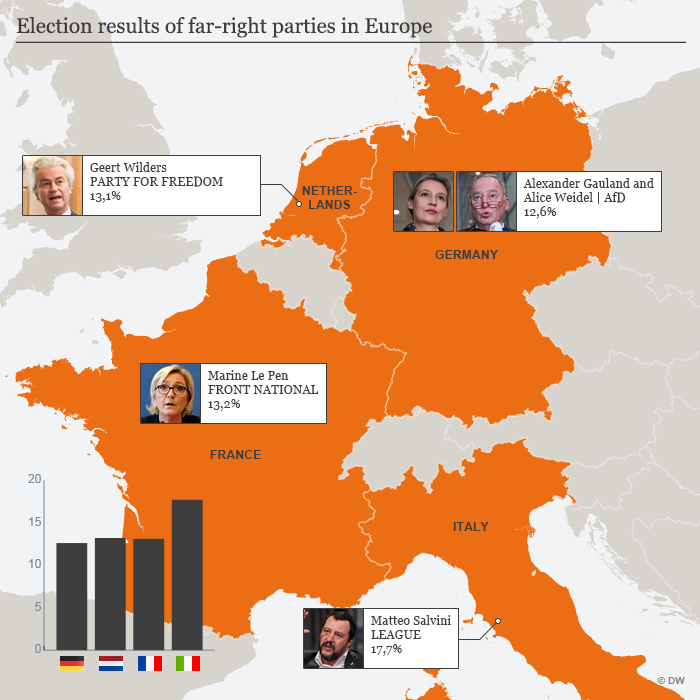 With 94 seats, the AfD (Alternative for Germany) is the third strongest party in federal government. In recent opinion polls the party is indeed outstripping the Social Democrats. Franceʹs Front National led by Le Pen achieved 33.9 percent in the second round of elections in 2017. In Italy, a right-wing alliance associated with former prime minister Silvio Berlusconi recently carried off 37 percent of the votes to become the strongest party in parliament, while in the Netherlands, Geert Wildersʹ PVV could point to an improved electoral result in March 2017
Here too, this is a case of double standards. After all, “critics of Islam” do not generally use the same standard to ascribe all negative behaviour of baptised people to Christianity.
Such interdependency between the hostile attitude towards a religion and the hostile attitude towards members of the relevant faith is familiar from a variety of areas including anti-Semitism. The purpose of referring to the “vengeful” God of the Old Testament is to transfer this supposed characteristic of their God to the Jews.
In other words, there is a definite link between the image that outsiders have of a religion and the image they have of those who adhere to that religion. Mechanisms that lead to the stigmatisation and marginalisation of a minority via attacks on the religion with which this minority is associated must, therefore, be taken into account in the analysis.
Dominance conflicts and the forging of identities
Some of today’s conflicts relating to Islam and Muslims in Western societies can be explained by increasing societal participation. Given that one of the main accusations levelled at Muslims is their alleged lack of integration, this initially sounds paradoxical. However, integration in the spirit of participation also results in dominance conflicts. It is not, for example, the backstreet mosques that generate a defensive reaction, but impressive places of worship that show Muslims to be members of society who are visible in the urban context.
Anti-Muslim discourses are, therefore, steeped in the need to relegate Muslims to a subordinate role in society and to deny that they are part of German and European society. This is why, by alienating them, identity-related questions relating to the non-Muslim majority society are renegotiated.
In this context, anti-Muslim racism serves both the stabilisation of a national community structure (a key phrase here being Deutsche Leitkultur, “defining German culture”) and the invocation of a supranational “Western” identity. The desire to keep one’s own nation “ethnically pure” and “culturally, religiously pure” or at least to safeguard the dominance of one’s own group within that nation, is extended to include the desire for a supranational Europe that is at least homogenous.
It is, therefore, important to note that current anti-Muslim racism in the context of migration societies is not being directed at a new target group, but is just increasingly using such contexts of reasoning that focus on the characteristic of religion in particular.