September 24, 2018February 23, 2021 by milena rampoldi
“Is your family religious?” is almost consistently the follow-up question to someone asking me where I am from. Ever since I moved to the U.S. as the daughter of a Lebanese mother and Iraqi father, I have had to contest with the reality that Americans, particularly white Americans, remain intensely curious about my religious affiliations.
Typically, this curiosity gives way to shock and confusion – nay, distress! – when I inform them that I, an Arab, am totally and categorically a progressive secularist, descended from a long line of secularists. It is as if my American peers, fellow progressives, are unable to conceive of an Arab identity devoid of religion. For them, the challenge to imagine an Arab beyond the framework of Islam or religion is certainly too tall an order.
At best, inquiries into my religion and the subsequent shock I encounter after disclosing that I have none can be brushed off as a mere faux pas. But, more and more often, I find myself wondering if these interactions denote a culture of progressive Arab erasure reinforced and propagated by multitudes on the left who have grown far too comfortable with lazy perceptions of Arabs as a monolithic people.
No sense of nuance
Often, there is no differentiation made between Arab and Muslim, no sense of nuance. On both the left and right there exists a deep seated attachment to the monochrome and it has fallen on non-religious Arabs to reject the efforts of the West and Arab sectarian leaders to erase us from discourses surrounding Islam, immigration and discrimination.
At this point, it is essential to establish a sound and respectable definition of the term secularism. The Oxford Living Dictionary describes the term as “the principle of separation of the state from religious institutions”, while providing the example sentence, “He believes that secularism means no discrimination against anybody in the name of religion”.
Here, I am discussing secularism not so much as it pertains to the constitution of a state apparatus, but secularism as it concerns an individual’s value system. In the case of Islam, particularly Islam in the Arab world, the implications of religion transcend far beyond state institutions and permeate the day-to-day lives of civilians, both religious and non-religious alike.
The household I was raised in was defined by an adherence to secular values. This has been the modus operandi for my family spanning generations on both my maternal and paternal sides. As a Shia by birth and the son of a train conductor, my maternal grandfather’s chances to transcend his parents’ poverty were dim. Historically, making up roughly 10 percent of the world’s Muslim population, Shias often occupy the poorest rungs of the socio-economic ladder.
My grandfather was lucky enough to have been afforded the privilege of a western education first in the International College of Beirut, then NYU to study aeronautical engineering – the result of years of scrupulous saving on my great-grandfather’s part. Yet, there and then, even the luxury of a western education would only allow a poor Shia to progress so far before smashing into (but not through) the concrete ceiling of opportunity.
In his early teens my grandfather joined the Syrian Social Nationalist Party. In Antun Saadeh’s vision of a unified Levant, he saw an opportunity to exceed the limitations of his sect and achieve a standard of life that had previously been inaccessible to his parents and their parents before them. With its highly secular ideology, the SSNP was seen by many as the answer to centuries of a sectarian caste system that ruthlessly delineated the have’s and have not’s of society.
Saadeh’s party propagated the idea that it was the geographical qualifications of a nation and not its ethnic bonds, that constituted its basis. In his eyes, the people of Levant and Mesopotamia were bound together by a common history and it was from this premise that a path away from sectarianism might be forged.
Extrapolating Arabness from Islam
Secularism came to define the intellectual environment of the Middle East from the 1950s to 1970s. Arabs, especially those living in the Levant, were finally engaging in a global conversation regarding individualism as separate from religious affiliation. 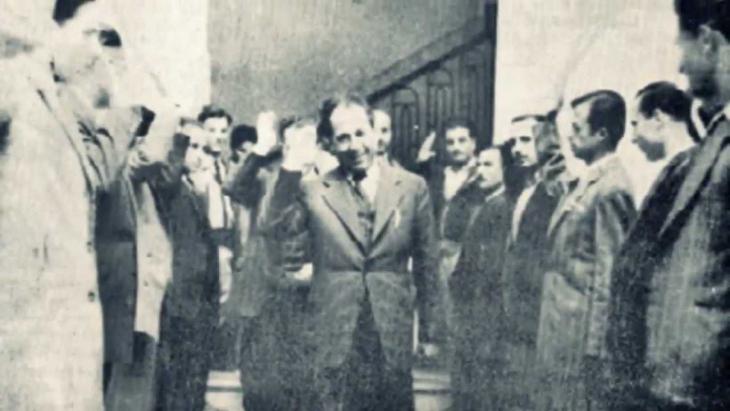 The household I was raised in was defined by an adherence to secular values. This has been the modus operandi for my family spanning generations on both my maternal and paternal sides. As a Shia by birth and the son of a train conductor, my maternal grandfather’s chances to transcend his parents’ poverty were dim. Historically, making up roughly 10 percent of the world’s Muslim population, Shias often occupy the poorest rungs of the socio-economic ladder
Since 9/11 and Bush’s declaration of the so-called “war on terror”, it has become near impossible to extrapolate so-called Arabness from Islam.
We could attribute blame to western journalists and politicians who have done little to differentiate between the two identities, generalising Arabs with the broadest of brush strokes either because they simply cannot be bothered to educate themselves on the abundance of (non) religious diversity among those who identify themselves as Arab or, more menacingly, to serve their political goals of vilifying the Arab people in order to justify historic assaults on MENA by western powers.
We could chalk it up to society’s propensity to fall so willingly into dusty stereotypes, its desire to oversimplify complexity whenever it can be oversimplified.
The two identities of Arab and Muslim have been so inextricably fused, so atomised, by mainstream media narratives that there seem very few options for a non-religious Arab such as myself to settle comfortably into an identity politics to call my own. Or, rather, that my identity politics are so unsettled by my inability to reconcile my Arab identity with my fierce refusal of all religious ideology.
The inescapability of religion
The first time I was forcibly made aware of how inescapable Islam, or religion more broadly, was to those who identify as Arab was in 2011 at the age of 16 after the sudden passing of my father. An Iraqi Shia in nothing but name, he resisted Abrahamic religious dogmas, preferring instead to embrace the teachings of Eastern philosophers of the likes of Confucius and Lao Tzu.
Yet because he had the misfortune of dying in the Middle East, according to Islamic jurisprudence the terms of his burial were non-negotiable. He was to be buried according to the religion ascribed to him in official government documentation.
This meant being buried within 24 hours of the time of death, a gut punch to my mother, two sisters and myself who were not living in Lebanon at the time. As if the circumstances surrounding his sudden death weren’t disorienting enough, we now had to contest with a miniscule window of time in which to travel to another continent, get our bereaved selves together and say goodbye.
Deprived of closure thanks to Islam
As a family of four women (my father was the only man) we were forbidden from attending his burial, relegated instead to mourning his death during the three-day aza. The reasoning for this dates back to the pre-Islamic era, referred to by Muslims as jahiliyah, or the time of ignorance, when it was customary for grieving women to wail during funeral processions and burials.
I was furious that religious conventions had been imposed on my family who had never in our lives practiced Islam. Indeed, today, feeling deprived of the closure that comes with witnessing the burial of a loved one all because of the grotesquely sexist customs of a religion neither I nor my family nor my late father had ever subscribed to, I am still furious.
Certainly, part of my reasoning for rejecting the inclination by so many to reduce my experience as an Arab to a set of religious dogmas is personal. But the fact remains that fellow progressives are perpetrating an erasure which has been co-opted by those on the right to justify waging an all-out cultural and military assault against Arab and Muslim communities both inside and outside the United States.
I invite my American peers to join me in the struggle to imagine an Arab beyond the framework of Islam or religion and put an end to these reductionist perceptions that have done more to denigrate and malign Arab and Muslim populations than to elevate them. Right now, given the level of hostility facing these communities, one that predates the Trump administration but has seen a renewal in viciousness since the 2016 election, the stakes have never been higher.