A down payment on making hajj easier for Muslim women

August 20, 2018February 23, 2021 by milena rampoldi
To prepare for this year’s hajj, the annual Muslim pilgrimage to Mecca that begins August 19, Maryum Ali, a Los Angeles social worker — and the eldest child of the late Muhammad Ali — has been spending time in saunas and walking in the Southern California heat to get acclimated to Saudi Arabia’s 110-degree weather.
She has also been watching her spending. The financial commitment is often the toughest challenge Muslims face as they try to complete one of the five pillars of the Islamic faith. The Massachusetts-based travel company Adam Travel, for instance, offers nine hajj packages this year, costing between $7,490 and $22,500 per person, depending on the length of stay and quality of accommodations.
Despite her father’s success, Ali, 50, said she has always lived off her social worker salary and “never had $8,000 laying around” to make the trip. A few years ago, she started putting money aside — even forgoing a 50th birthday party, she said — so she could one day make the journey.
Ali had already made a down payment to a tour group when she was connected to the Hajjah Project, a group founded in Los Angeles a year ago by Krishna Najieb, 63, a human resources specialist who converted to Islam in 2009.
After returning from hajj three years ago, Najieb realized how common it is for women to forgo the trip. Not only is money a frequent obstacle, but family duties, health and even how women think about pilgrimage all prevent them from going. This year, Ali became the first woman selected to receive help from the group. 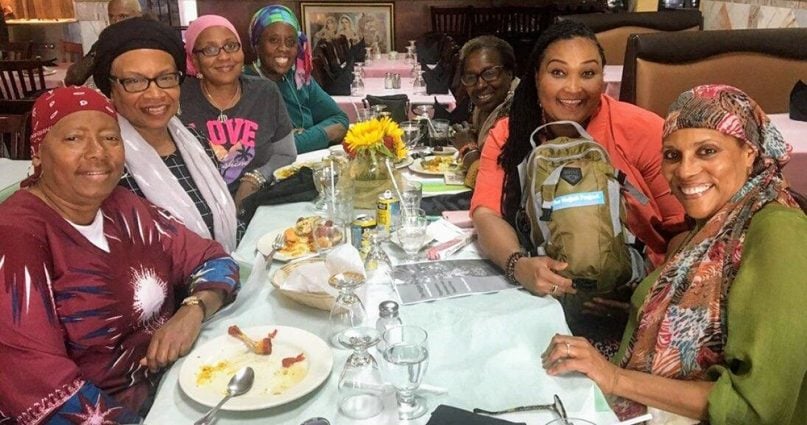 Maryum Ali, second from right, holding her Hajjah Project backpack with the group’s founders. (Photo courtesy Hajjah Project)
“Putting off things for themselves is just part of being a woman,” Najieb said. “We take care of the family, we take care of our children, we take care of our husbands, we take care of our parents. I wanted to do something that would inspire and educate women to want to make hajj a higher priority in their lives.”
Today, with seven other female volunteers, Najieb organizes educational and community events to raise money for aspiring hajjahs. Najieb said the fledgling group has raised $1,500 so far.
When Najieb first decided to go on hajj, she didn’t expect money to be a problem. She and her husband put $10,000 down with a hajj tour group, thinking they had another month to come up with the rest of the payment. But two weeks later, they received a call asking them for a balance of $4,000.
So she and her husband set up a GoFundMe crowdsourcing campaign to raise the remaining amount.
“For some people it was inappropriate, it was Islamically not sound,” said Najieb. “For others, it was like, ‘Oh, good idea.’”
That’s when the Hajjah Project was born. “I didn’t want anyone else to have to go through that, if you’re serious and Allah has accepted your request to go to hajj,” she said. 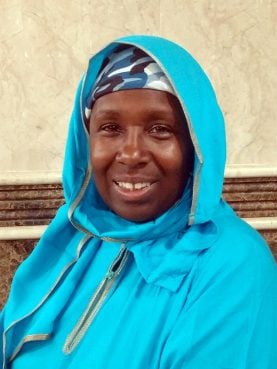 Hajjah Project founder Krishna Najieb while on hajj in 2015. (Photo courtesy Krishna Najieb)
The Hajjah Project doesn’t fund anyone’s hajj entirely. While Najieb said she would like to increase the amount of the cash gifts and number of people who receive one, fully funding a woman’s pilgrimage, she believes, would take away from her intention to make hajj. For Ali, the project’s $500 contribution is a crucial boost to her spending money while she’s in Saudi Arabia.
More important than the money, Ali said, has been the advice the Hajjah Project gave her.
Najieb and others she met through the project told her to have patience. “‘It’s not going to be perfect; there (are) 2 million, 3 million people there,’” Ali recalled them saying. They also gave her tips on how and where to wash her clothes and what to expect from the bathrooms.
“Even though hajj is spiritual, there are a lot of logistics to adjust to,” said Ali. “They let me see a visual that you don’t get in any of the tutorials on YouTube.”
Noor Abbas, an engineer from Los Angeles, said the group’s support has been critical.
“I attended another hajj workshop and read books and things like that, and it’s almost always from the male perspective,” said Abbas. “I learned all the rules, but I wanted to get more of a woman’s perspective and hear about what it’s like from our side.”
Not least among the practical help Najieb’s group provided Ali and Abbas was a heavy-duty backpack filled with toiletries, a headscarf, a prayer booklet, snacks and built-in water storage.
“They eased a lot of anxiety,” Ali said.
In reducing women’s concerns about hajj, the Hajjah Project hopes to change women’s thinking about the pilgrimage.
As a young, single woman, performing hajj never crossed Zariah Horton’s mind. Now, as a therapist and educator who serves on the project’s leadership team, Horton said that when she was growing up, hajj was for elders.
“It’s for people who have time to take off a month,” Horton said — not for people who need to work or care for children. “Who’s going to look after my kids for a month?”
Part of the Hajjah Project’s answer is to encourage women to go when they’re younger, after high school or college graduation, or in between jobs.
“I want to inspire someone younger than myself to take the opportunity, like after college, and say, ‘Sister, have you thought of hajj? Have you thought of it before you have a mortgage, before you have kids?’” said Horton.
Most important for Najieb is the spiritual renewal the pilgrimage brings and the ripple effect it has in the Muslim community.
The Hajjah Project’s work, Abbas said, is an example for other Muslim women. “It shows that women should be doing this and can be doing this, and have the support of other women if they are doing this.”
(Caitlin Yoshiko Kandil is a graduate of Harvard Divinity School and a freelance reporter based in Southern California. Her work has appeared in the Los Angeles Times, NBC News and other publications.)