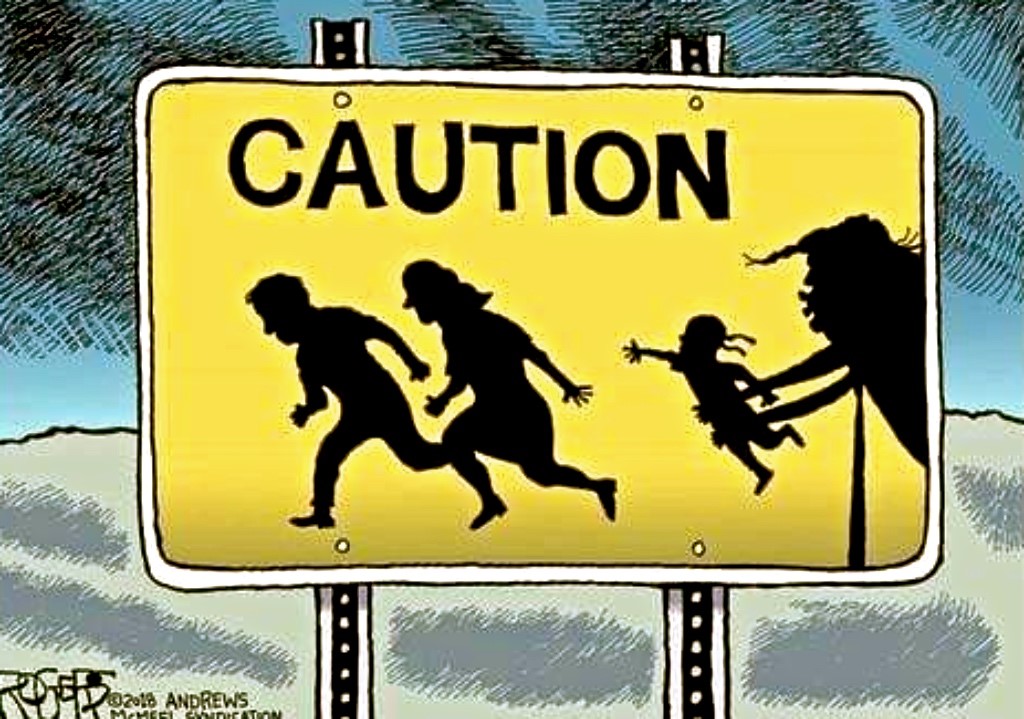 “All I
can say, after talking to the people, watching the people, listening to the
people: the Statue of Liberty, I think, is weeping right now,”
Gayle
King on  CBS This Morning.
“Protests
are growing at processing centres nationwide, where those children are being
detained,”
Hoda
Kotb said on NBC’s Today.
“Something
disgraceful is happening, something that can be stopped,”
Ana
Cabrera on CNN.”
The
above are just a few examples of the commendable U.S. media reaction — to the
Trump administration’s zero tolerance immigration policy — that championed
basic American values, family values, and morality. The last time the
U.S. media was moved to express outrage was back in January when their
so-called President — whom  millions of Americans continue to blindly
support despite his blatant daily lies and unabashed transgressions — made his
racist remark about African nations, Haiti, and El Salvador being
“shitholes”  https://bit.ly/2K71Bjr
The
cruel separation from their parents and detention of some 2,300 children
rightly outraged many in the U.S. media with some even being moved to tears
while listening to recordings of crying children.  https://bit.ly/2Kk3QTI  This
same U,S. media, however — led by the Ochs-Sulzberger family owned New York
Times — has for 70 yers either largely ignored or deliberately obfuscated
the facts about Israel’s inhumane treatment of Palestinian children despite all
the substantiated evidence, reports by human rights organisations, and
available video recordings.  https://bit.ly/1AlS9wL
“Israel
continues to ignore the basic principles that guide juvenile courts within
Israel and throughout the world, and especially the principle of “the child’s
best interests,” and the understanding that incarcerating a minor must always
be a measure of last resort. Israel has not introduced any changes to the early
stages of the process – i.e., the minors’ arrest and interrogation – although
these phases are crucial to determining the minors’ fate. At these times, the
minors are cut off from their environment and held without their parents or
legal counsel, surrounded by adults who represent the occupying power. This
continues in the interrogation, which is often carried out hours after the
arrest, by which time the minors are hungry and exhausted. The interrogators
subject them to threats, shouting and even violence until they manage to
extract a confession from them, or allegedly incriminating statements against
others.”
B’Tselem
Report, March 2018.  https://bit.ly/2tuT2b9
The
U.S. media and American citizens (subjects), however, cannot in all honesty
blame the current inhumanity on the U.S.-Mexico border on President Donald
Trump alone. They too must accept some of the responsibility for what is
happening in the U.S. because Trump represents who they are and what the
have become.
It was
after all in “their name” that the U.S. killed more than 20 Million People in
37 “victim nations” since World War II https://bit.ly/2ymNssN; in
their name that U.S. is involved in brutal Syrian and Yemeni civil wars and in
the ongoing violence and instability across Iraq that have displaced millions
of people with over half of them being children; in their name that the U.S.
continues to seek the toppling of democratically elected latin American
countries while doing nothing about countries such as Myanmar (Burma) where the
Muslim Rohingya people are being ethnically cleansed by a government being
supplied with arms from Israel https://bit.ly/2IiQnXk; in their name and
with their tax dollars that the U.S. has helped to finance the barbaric
occupation and ethnic cleansing in Palestine by an
Apartheid Israeli regime; and it is also in their name and with $700 billion of
their tax dollars that the U.S. is able to continue militarising the globe with
some 800 military bases in more than 70 countries and territories while
America’s poor are becoming more destitute and “most Americans don’t care
about it. They have bought the line peddled by conservative groups that poor
people deserve what they are getting,”   https://cnn.it/2Kf1aqu
“The
protection of fundamental human rights was a foundation stone in the
establishment of the United States over 200 years ago. Since then, a central
goal of U.S. foreign policy has been the promotion of respect for human rights,
as embodied in the Universal Declaration of
Human Rights. The
United States understands that the existence of human rights helps secure the
peace, deter aggression, promote the rule of law, combat crime and corruption,
strengthen democracies, and prevent humanitarian crises.
Because
the promotion of human rights is an important national interest, the United
States seeks to:
Hold
governments accountable to their obligations under universal human rights norms
and international human rights instruments;
Promote
greater respect for human rights, including freedom from torture, freedom of
expression, press freedom, women’s rights, children’s rights, and the
protection of minorities;
Promote
the rule of law, seek accountability, and change cultures of impunity; and
Coordinate
human rights activities with important allies, including the EU, and regional
organisation”
So
Guess What . . . 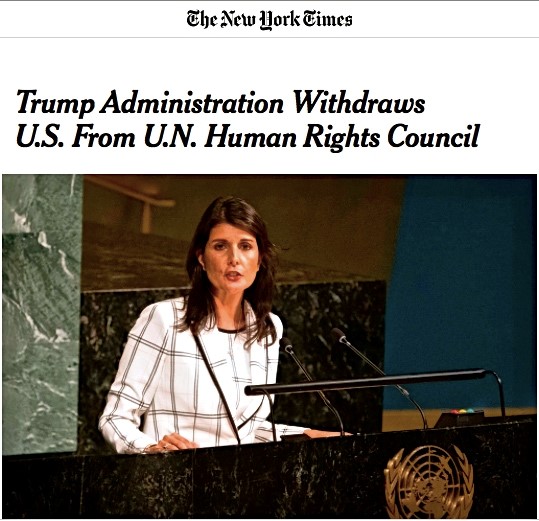 The
U.S. has withdrawn from the world’s most important human rights body in protest
at its frequent criticism of Israel’s treatment of the Palestinian people. This
was the latest example of the subversive extent to which the American Israel
Public Affairs Committee (AIPAC) controls the U.S. government whose first
allegiance is to Israel and whose members were required to sign a pledge to
support Israel  https://bit.ly/2Mj3KsS
So
please America, spare us your hypocrisy and lectures about democracy and human
rights — concepts about which you know nothing, and for which you have no
respect — and instead concentrate on educating the more than 32 million
Americans who cannot read; on improving the lives of the more than 50 million
Americans who live below the poverty line; on addressing the grim reality that
some 48 million Americans have to rely on food stamps for survival; on reducing
the growing gap between the rich and the poor https://bit.ly/2MeB2JI;
on having elected representatives whose first loyalty is to the American
people; on not interfering in the affairs of other nations and alternatively
minding your own; and finally, on starting to practice what you so
bombastically preach. Thank you!
William
Hanna is a freelance writer with published books the Hiramic
Brotherhood of the Third Temple, The Tragedy of Palestine and its Children, and Hiramic
Brotherhood: Ezekiel’s Temple Prophesy which has also been
published Chinese, French, German, and Portuguese, and is due for publication
in Arabic, Italian,, Russian, and Spanish. Purchase details, sample
chapters, reviews, other articles, videos, and contact details at:
http://www.hiramicbrotherhood.com