June 6, 2018February 23, 2021 by admin
By Rick Gladstone, NY Times,
June 5, 2018
Israel’s
military said Tuesday that the killing of a young Palestinian volunteer medic at a Gaza fence protest last week
was unintentional and that only “a small number of bullets were fired” by its
soldiers.

The
comment by the Israel Defense Forces, posted on its English-language Twitter account,
provided the first substantive detail of the Israeli version of the killing,
which has been widely condemned by international humanitarian and rights
groups. The comment did not explicitly attribute the death to Israeli actions. 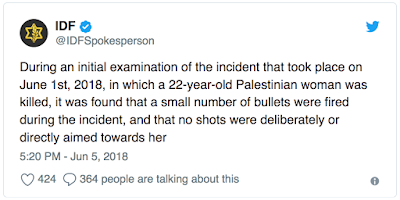 The
medic, identified by her Palestinian passport as Rouzan al-Najjar, 20, has
quickly become a symbol of heroism to Palestinians and their supporters. Her
first name has sometimes been rendered as Razan.
She was
the 119th Palestinian killed in the three-month-old Gaza fence protest
campaign, according to the Gaza Health Ministry.
Israel
has argued that the protests are a guise by the Palestinian militant group
Hamas, which controls Gaza, to invade Israeli territory and terrorize
civilians. Israeli officials have said the military has acted legally and
justifiably in the protests to prevent a breach of the fence by the protesters,
and that live ammunition has been used only as a last resort and under strict
guidelines.

Most of
the Palestinian protesters are unarmed, but some have lobbed firebombs and
attempted to break through the fence. Some have hurled rocks and launched
flaming kites over the fence into Israel to start fires.

No
Israelis have been killed in the protests. Most of those killed on the Gaza
side were shot by Israeli forces, half of them in a single day, May 14, at the
peak of the campaign.
While the
Israelis have rejected criticism that their response to the protests has been
disproportionate, the Israeli military appeared to be treating the killing of
Ms. Najjar as a case that required further scrutiny.
Thousands
of people attended the funeral of Ms. Najjar in Gaza on Saturday. A
group of United Nations agencies issued a joint statement expressing outrage at the killing of an
unarmed medical relief worker.
Witness
accounts said Ms. Najjar was shot two or three times in the upper body by
Israeli soldiers positioned across the fence as she was seeking to aid an
injured protester, about an hour before dusk on Friday.
The
Israeli military’s Twitter post, which misstated her age as 22, said an initial
examination had found “that a small number of bullets were fired during the
incident, and that no shots were deliberately or directly aimed towards her.”
A follow-up
Twitter post said the episode would be further examined by the
Israeli military and that the findings would be passed to the chief military
lawyer.
The
protests along the fortified fence that separates Gaza from Israeli territory
have become an acute flash point in the intractable Israeli-Palestinian
conflict.
The
Palestinians have been rallying at the fence every Friday since the end of
March, protesting an 11-year-old blockade of Gaza and demanding the right to
return to lands that are now part of Israel.
A
resolution presented to the United Nations Security Council on Friday to
condemn the Israeli actions at the Gaza fence was vetoed by the United States, which contended the wording was
one-sided against its Middle East ally.