Rights
groups expect an unprecedented number of families to be separated and warn of a
rise in attacks against Muslims. 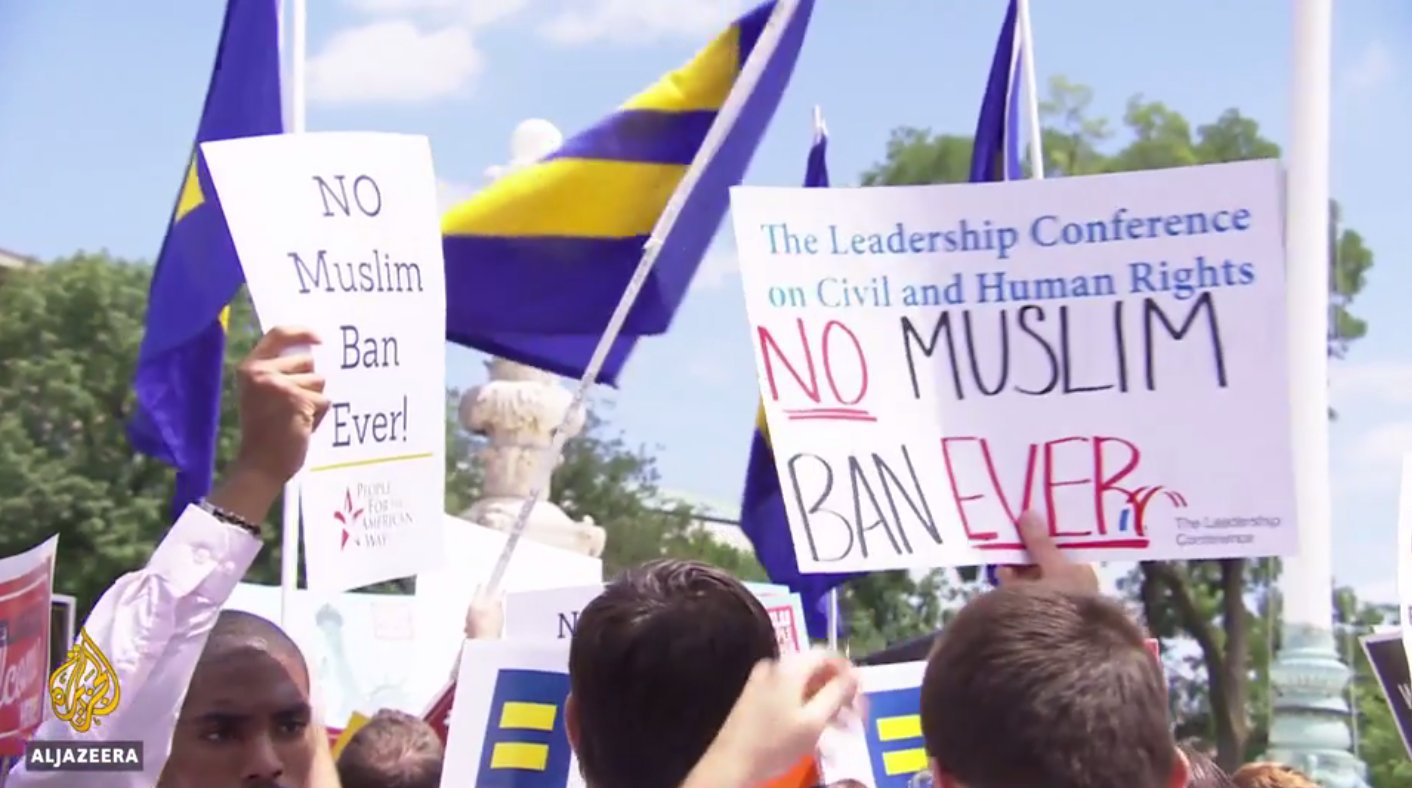 Washington,
DC –  American-Muslims have decried a US Supreme Court ruling that
upheld a controversial travel ban on five Muslim-majority
countries, expressing anger and fear over what it will mean for them and
their families.
Dozens of
people gathered outside the court building on Tuesday, holding banners and
shouting slogans such as “No ban, no wall” to protest against the
decision on a policy Donald Trump has
fought for since his first week in office in January 2017.
The ban
prevents entry into the US by most people from Iran, Libya, Somalia, Syria and Yemen.
“I’m
very disappointed; I did not expect this,” Arwa al-Iryani, an American of
Yemeni origin living in Connecticut, told Al Jazeera.
She said
her in-laws would no longer be able to visit her and their granddaughter.
“They
used to come twice a year, during summer and Christmas,” she said.
“Now the whole family is split”.
‘Advancing
a white nationalist agenda’
At home,
citizens from the mostly Muslim countries, including those who were in the
process of migrating to the US, also expressed devastation at the ruling.
Nasser
Farpour, a resident of Iran’s capital, Tehran, said he first applied for a
visa to travel to the US in 2003.
He said
he spent “thousands of dollars” in the hope of seeing his sister,
nieces and nephews in the US, and for a chance to provide his “children
with a better education”.
“We
spent so much money and time,” he told Al Jazeera. “We went to Turkey and
stayed for a week and completed our medical screenings in addition to all of
our security screenings. The day we were supposed to get our visas, the travel
ban was issued,” he said, referring to Trump’s executive
order last year.
“We
have been waiting for more than 15 years. Why would they do this to us after
all this time?”
Fapour’s
niece in the US, Yasmine Taeb, a lawyer working at the Center for Victims of
Torture, said countless of other families would be affected by the
ruling.
“The
ruling has a real human cost,” she said. “This is what the American
people need to understand; this is discriminatory, this is unacceptable.”
Following
the court’s decision, advocacy and rights groups said the country would see an
unprecedented number of families separated and warned of an increase in attacks
against Muslims.
Taeb said
the travel ban, which comes at the backdrop of the “zero-tolerance
policy” at the US border that has seen more than 2,000
children taken away from their families, was a policy centred on
“advancing a white nationalist agenda”.
Even so,
Taeb, as well as other legal analysts, said the ruling was expected due to the
body of the Supreme Court which holds a conservative majority.
Jessica
Levinson, a law professor and a political commentator, agreed. She said the
ruling took into account Trump’s executive authority as president, irrespective
of “candidate Trump”, who called for a complete and total shutdown of
Muslims entering the country.
‘Expression
of Islamophobia’
The
Supreme Court’s ruling could also embolden the president to carry out further
border and immigration restrictions, analysts said.
“The
decision suggests that Trump has broad leeway to do as he sees fit as long as
he points to a national security justification,” said Nancy Leong, a
law professor at the University of Denver, said.
In a
statement from the White House, the president said he would continue to
“fight for an immigration system that serves the national interests of the
United States and its citizens”.
Since
Trump took office, reports of crimes against Muslims in the country saw a
greater spike to that following the September 11, 2001 attacks, said Ibrahim
Hooper, spokesman of Council on American-Islamic Relations.
“I
think not only will the ruling increase Islamophobia, it is an expression of
Islamophobia,” Hooper said at the rally outside the Supreme Court.
“This
is a culmination of years of Islamophobia exploited by candidate Trump and now
President Trump.”
But even
before Tuesday’s ruling, many had reported difficulty obtaining a visa to
travel to the US following Trump’s election.
“Everyone
who has applied from my family has been rejected,” said al-Iryani.
“I
don’t understand this since there have not been any terror attacks by a Yemen
national. I don’t understand what the ban is based on.”