Sana
Cheema, a 26-year-old young woman, who was on her homecoming tour from Italy
last month, was strangled to death, contrary to earlier reports of accidental
death, the forensic report has confirmed. 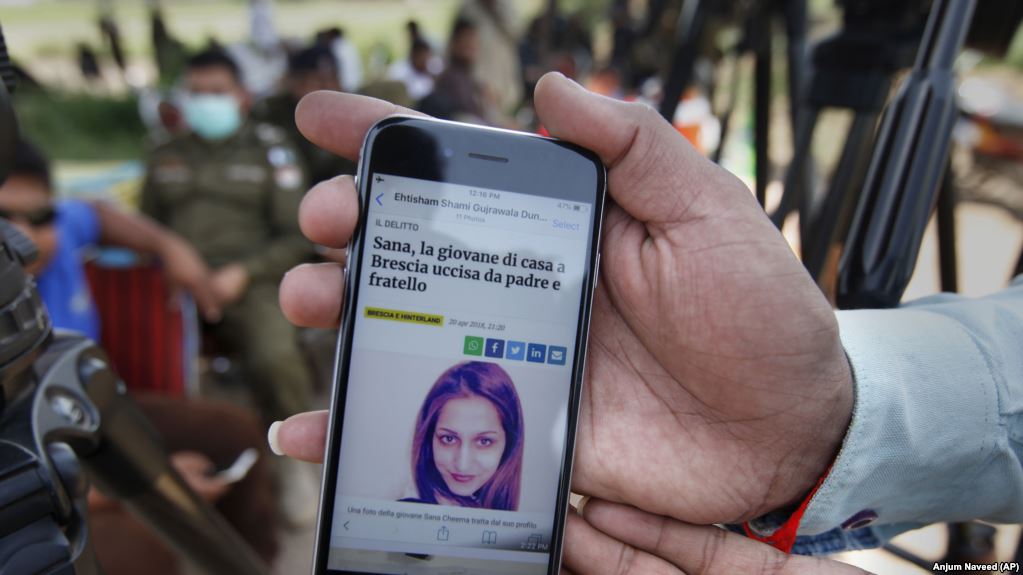 The report devised by Punjab Forensic Laboratory details that the girl’s
neck bone was found broken after the body was exhumed on April 25th, which was
later verified by Aziz Bhatti Shaheed Teaching Hospital. The forensic report
stated that the girl’s voice box was swollen and the right cornua of her hyoid
bone (in the neck) had been dislocated. Moreover, three pieces of green chili
were found in her sound box as well, however, the medics did not find any signs
of poison or drugs in Sana’s body.
The case
of Sana Cheema surfaced last month when it was reported that the girl was
forced by her father, to marry against her will. However, as Sana was reluctant
to wed on the directives of her father, she refused to eat and fell ill; the
police also confirmed the chain of events in the same fashion quoting the
victims. Soon the Italian media found suspicion in her death and a newspaper,
Giornale di Brescia, raised concerns about the ‘honor killing’ aspect,
following which a magistrate ordered to exhume the remains of the body. Members
of the Pakistani community in Italy had also demanded a thorough probe into the
mysterious death.
Initially,
Sana’s father and brother were successful in portraying her death due to
unknown causes. They also furnished her medical reports, confirming that Sana
was facing blood pressure irregularities. However, the local police sprang into
action and lodged a murder case against Sana’s father, Ghulam Mustafa, her
brother Adnan, and her uncle Mazhar Iqbal Cheema. Mustafa and Adnan are still
in police custody and are booked under Section 302 of Pakistan Penal Code.
Moreover, another clause regarding blood money has also been added in the case,
however, Sana’s uncle has gotten off the hook.
Initially
the case was being treated as an ordinary death, however, soon the police
sensed that there was something wrong in the death. The victim’s friends also
rejected that Sana could die accidentally, claiming that the victim wanted to
marry  with someone in Italy, defying the wishes of her family in
Pakistan. When the family members sensed that Sana was determined on her
decision, they strangled her to death on April 18th, a day before she was
scheduled to go back to Italy.
Cheema’s
death had also riled the social media users who started a couple of trends with
the hashtag #VeritaPerSana and #TruthForSana, further luring in activists from
Italy. Sana Cheema’s death has once again reinforced the perception of how a
patriarchal society treats a woman. However, this is not the first murder due
to honor in the ultra-conservative society.
In 2016,
a British-Pakistani woman was raped and strangled to death when she was on her
tour to Pakistan. The beauty therapist was based in Bradford, West Yorkshire,
however, she boarded a plane to visit her ailing father. Tragically, just a
week after her arrival, her former husband – who happened to be her cousin –
murdered her. Mohammad Shakeel confessed killing his former bride, who had
divorced him in 2014, before remarrying.
There is
an uncanny resemblance in both the cases as Samia’s father had also claimed
that she died of natural causes. Moreover, Sana was killed over a marriage
dispute; likewise, Samia Shahid also breathed her last as she tied the knot
with a British-based man.  The 28-year-old lady feared for her life but
ultimately ended up being killed in the name of honor.
In the
same month, a social media star of Pakistan, Qandeel Baloch was also strangled
to death by her brother and cousin. Qandeel posted risqué content on her social
media page, which was disapproved and appreciated alike, however, her family
members ultimately ended her life. Waseem Azeem, the brother of the social
media sensation also confessed to his crime, saying that he strangled the lady to
death.
According
to the statistics released by the Human Rights Commission, nearly 1,100 women
were killed in Pakistan in 2015. The combined figures for the years 2016, 2015
and 2014 reveal a harrowing figure as 2300 women had been killed for honor.
Although Pakistan has closed a legal flaw which allowed the killers to go free,
honor killing is still on the rise.
After the
death of Qandeel Baloch, Pakistan’s legislature approved a bill suggesting that
the state will become complainant against the killers instead of family members
in cases related to honor killing. For years, the family members of the victim
had the liberty to pardon the killer, however, with the recent legislation, a
mandatory life sentence was proposed for the murderer. Even then only a judge
can decide whether a murder can be equated to a crime of honor or not,
virtually meaning that a culprit can walk free for explaining a motive other
than honor.