On the
25th World Press Freedom Day, the International Federation of Journalists (IFJ)
says that the recent spike in violence targeting journalists is a stark
reminder that there can be no press freedom when journalists live and work in
fear. 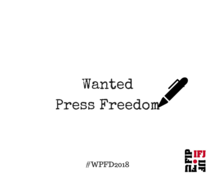 The IFJ
has recorded 33 journalists and media staff killed so far in 2018, with a
chilling ratio of two journalists killed every single week. The IFJ believes
that the safety crisis in media calls for global action against impunity for
crime against journalists and is urging world governments to commit to
defending press freedom by endorsing the IFJ’s proposal for an International
Convention on the safety and independence of journalists and other media
professionals.
The IFJ’s
annual survey among its affiliates on the violations of journalists’ rights and
freedoms to mark 2018 World Press Freedom Day showed high number of cases where
journalists have been intimidated, attacked, jailed and killed while impunity
for such crimes remains at over 90%.
Several
affiliates’ reports describe an increase in violence against journalists across
the globe since May 3rd 2017.
In
Afghanistan, 10
journalists were killed on Monday 30th April in what is seen as the
deadliest day for journalists in a decade in the country.
In
Greece, extreme-right political party Golden Dawn Party continues its
intimidation campaign against the press. JUADN, an IFJ affiliate, reported
several cases of violence and intimidations targeting journalists and media
organisations. Two of them, one involving sports editor Aris Asvestas and the
other targeting Newspaper Kathimerini offices in Thessaloniki were also
reported by the IFJ/EFJ to the Council of Europe platform for the protection of
journalism and safety of journalists.
In Peru,
at least 92 attacks against journalists have been registered by the Asociación
Nacional de Periodistas del Perú (ANP). For the first time in two decades,
threats of litigation has become the most used form of intimidation, overtaking
physical violence. None of these cases has been investigated, the association
reports.
In
Somalia, 4 journalists were killed in 2017. The National Union of Somali
Journalists (NUSOJ) reported 22 journalists arrested and 8 physically
assaulted. Two others were handed 2 year jail terms in 2018 after being
convicted of “spreading propaganda against the nation. The union deplores the
record levels of impunity that contribute to attacks against the press in the
country.
In the
face of these serious attacks on the press, the IFJ says there is a need for a
mechanism which provides accountability and its proposed International Convention
on the Safety and Independence of Journalists and Other Media Professionals
offers a way forward.
The new
Convention would for the first time establish binding standards creating
safeguards specifically for journalists and media workers. It would provide a
codification of all applicable rules in one instrument, bringing together both
human rights and humanitarian law provisions. It would include: the obligation
to protect journalists against attacks on their life, arbitrary arrest,
violence and intimidation campaigns, the obligation to protect against forced
disappearances and kidnapping (by state agents or private actors), the
obligation to carry out effective investigations into alleged interferences and
bring the perpetrators to justice. It would intensify international scrutiny
over attacks against journalists as well as assisting national authorities in
understanding their international obligations, currently fragmented in several
treaty provisions and case law and bring perpetrators to justice; in the
context of armed conflict, the obligation to treat media workers and facilities
as civilians (and hence illegitimate targets) and to conduct military
operations with due diligence.
“We
cannot celebrate World Press Freedom Day without calling on world government to
take their responsibility to guaranty the safety of our colleagues,” said
Philippe Leruth, IFJ President. ”Press freedom is about journalists being able
to work free of fear. And it is about the right of the public to be informed by
an independent and free media. The International convention would for the first
time establish binding standards that would support our colleagues’ safety in
the course of their duty.”
“With the
devastating attack against our colleagues in Afghanistan on Monday, it is 33
journalists who lost their lives in the course of their duties this year, that
is two journalists killed every week,” added IFJ General Secretary Anthony
Bellanger. “These killings must not remained unpunished. It is time to
acknowledge that journalists are exposed to specific risks due to their
profession and to provide them with the necessary protection. The international
convention will do that. We urge UN member states to adopt it without delay and
take a concrete commitment towards press freedom.”
For more
information, please contact IFJ on + 32 2 235 22 16