The renegaded victims of the Christian-Zionist jubilee celebrations 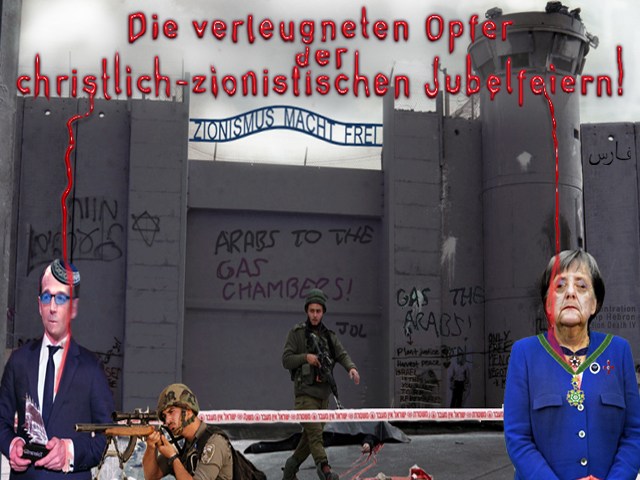 Greetings for the 70th
anniversary of the “Jewish State”, based on the displacement of 750.000
Palestinians from their homeland in 1948, during the Nakba (catastrophe). All
famous politicians celebrate this anniversary of the foundation of the “Jewish
State”. Nobody says one word about the Nakba, the catastrophe which supported
by us in the West caused the occupation of Palestinians living imprisoned without
any rights. One-thousand famous politicians and “Friends of Israel”, from
Steinmeier to Maas, did not renounce to their celebration, while the renegaded
victims, the Palestinians, had to “stay outside alone”. (1)
There is no empathy at all for
the last victims of the Holocaust, the Palestinians
German Chancellor Merkel and foreign
minister Maas fall over themselves with declarations of friendship and
gratulations. What is particularly questionable is the fact that Merkel in an
interview for the Israeli channel Ten explicitly talks to people of “Jewish
origin” or Jews in Germany by offering them the guarantee to do all for their
safety. The fact that synagogues, schools, kindergarten and Jewish institutions
must be guarded worries her a lot. (2) There is no empathy for the last victims
of the Holocaust, the Palestinians, during these Christian-Zionist joyful celebrations.