Jeremy Corbyn
has described airstrikes on Syria as legally questionable and accused Theresa
May of “trailing after Donald Trump” in an attack that could escalate the
conflict.
The
Labour leader was responding to the news that the US, UK and
France launched airstrikes in Syria early on Saturday morning.
Corbyn, who has called for an independent UN-led investigation of last week’s
chemical weapons attack, said the prime minister should have sought
parliamentary approval before launching the action.
“Bombs
won’t save lives or bring about peace,” Corbyn said. “This legally questionable
action risks escalating further, as US defence secretary James Mattis has admitted,
an already devastating conflict and therefore makes real accountability for war
crimes and use of chemical weapons less, not more likely.”
In a
press conference on Saturday morning, May said the attacks were “right and
legal” and “gave a very clear message to the regime”.
Theresa
May: Syria strikes ‘right and legal’ option – video
Labour has opposed a
strike on Syria since the chemical weapons attack on Douma. On Thursday, Corbyn
urged May to remember the lessons of intelligence failures in the build-up to
the Iraq war and said: “There has to be a proper process of consultation.
Cabinet on its own should not be making this decision.”
Corbyn’s
response came as British politicians responded to news of the attack, which
involved four RAF Tornado jets alongside French and American forces. The
Scottish first minister, Nicola Sturgeon, was among the most outspoken critics
of the military action, saying the move risks “dangerous escalation”. 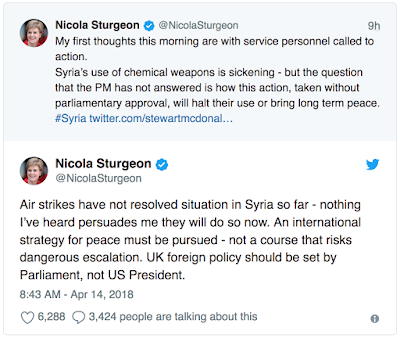 The SNP’s
leader in Westminster, Ian Blackford, echoed Sturgeon’s views, saying: “We need
a plan for peace,”, adding: “A bombing, allegedly a one-off affair, does not
aid this.”

Blackford
called for the recall of parliament on Saturday for an emergency debate,
saying: “It is not acceptable that the prime minister has ploughed ahead
without any debate or parliamentary discussion.”
Labour
MPs echoed Corbyn’s view. The shadow education minister, Angela Rayner,
complained that MPs had been “frozen out” of the decision and questioned the
effectiveness of military action. 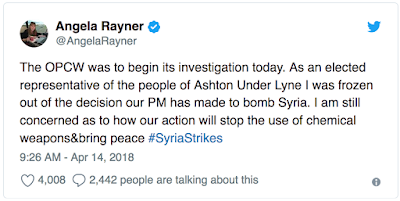 The MP
Alison McGovern said the action had to be part of a “comprehensive strategy to
save civilian life” and urged that the aid budget be deployed to the fullest
extent. 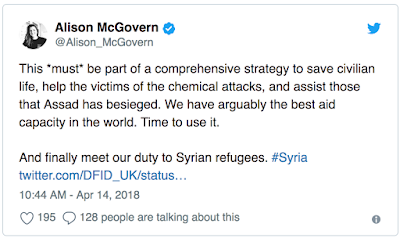 The
Labour backbencher John Woodcock said while May should have consulted MPs, “it
was right that the UK joined our allies in action to degrade Assad’s chemical
weapon capability”.

Members
of other parties questioned the action, with Liberal Democrat leader Vince
Cable saying: “Riding the coattails of an erratic US president is no substitute
for a mandate from the House of Commons. The Prime Minister could and should
have recalled Parliament this week.”
The Green
peer Jenny Jones asking what would be left of Syria after the bombardment.

Not
everyone was critical. Paddy Ashdown, the former leader of the Liberal
Democrats, came out in support of the prime minister. 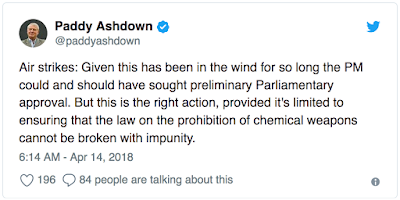 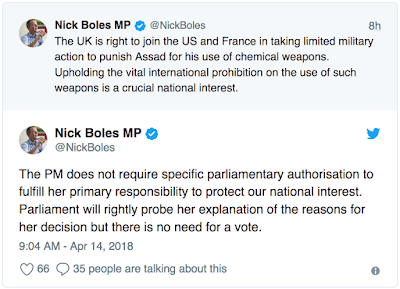 Other
Tory MPs echoed his thoughts.