Tens of
thousands attend second mass protest in as many weeks calling for return of
Palestinian refugees to their lands. 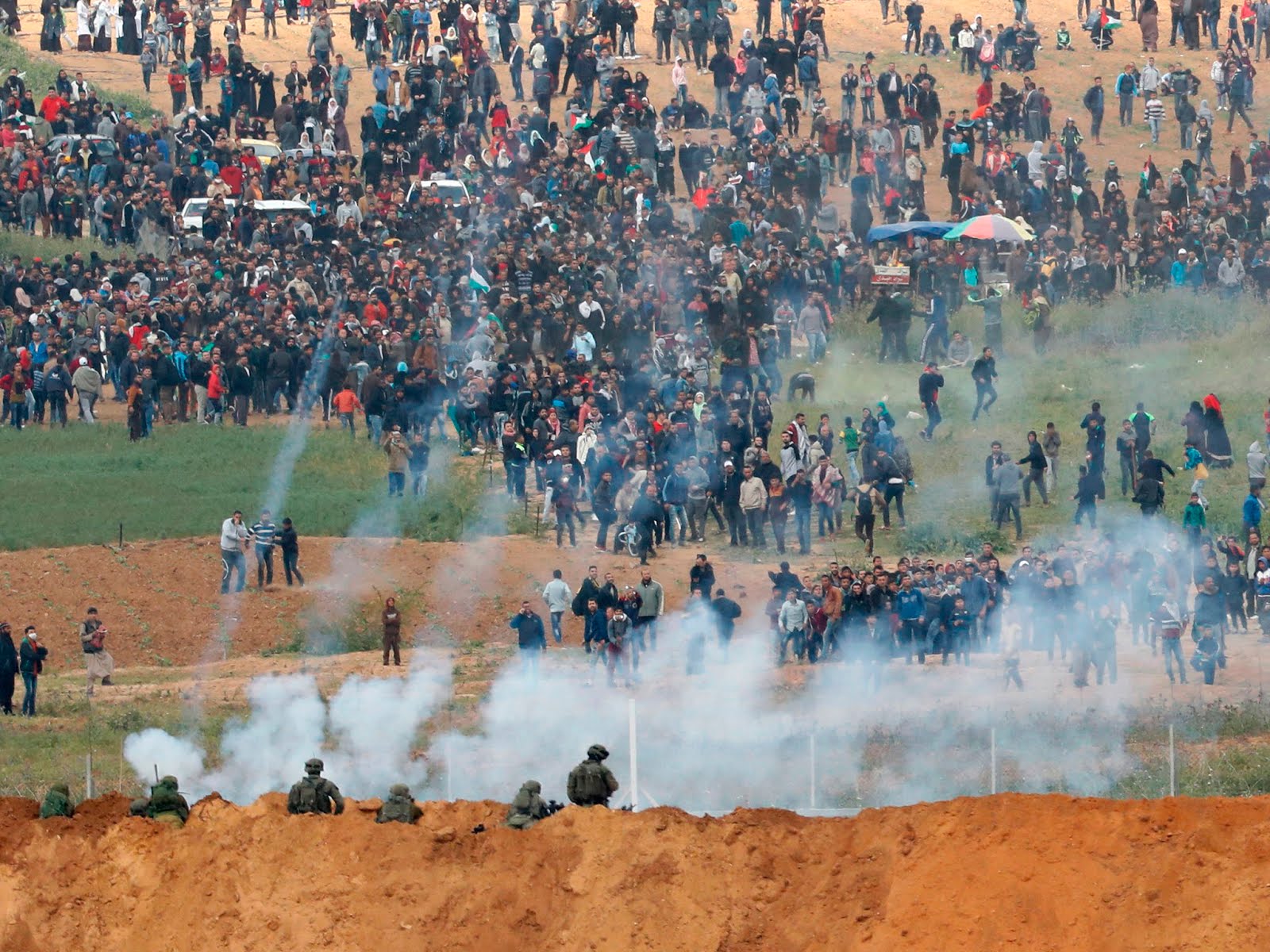 Israeli
forces have shot dead seven Palestinians and wounded more than 1,000 as tens of
thousands participated in a mass demonstration demanding the right of return
for Palestinian refugees.
The
Palestinian Ministry of Health reported on Friday that 293 people were injured
by live ammunition after Israeli forces fired on protesters who had gathered
near the Israeli border in the besieged Gaza Strip.
Hundreds
of protesters suffered other injuries, including tear gas inhalation.
Palestinian
officials identified those killed as Osama Qdeih, 38, Majdi Ramadan Shbat,
Hussein Madi, 16, Ibrahim Al-Ourr, 20, Sidqi Abu Outewi, Mohammed Hajj Saleh,
33, and Alaa al-Zamali, 17.
Earlier
on Friday, Thaer Rabaa succumbed to his wounds after being shot at last
week’s March 30 protest.
Friday’s
demonstration was the second in as many weeks of a planned, weeks-long sit-in
dubbed the Great March of Return.
Its main
message is to call for the right of return for Palestinian refugees who were
driven from their homes in the territories taken over by Israel during the 1948
war, known to Arabs as the Nakba.
Aound 70 percent of Gaza’s
two million population were forced from their homes and now live in a
territory the size of the US city of Detroit – about 360sq km – which has
been described as “the world’s largest open-air prison”.
Israel
has drawn sharp criticism for its open-fire orders along the border, including
its warnings that those approaching or trying to damage the fence would be
targeted.
At least
21 Palestinians were killed at last week’s March 30 protests, or succumbed to
their wounds in the following days, after Israeli forces fired live
ammunition, tear gas and rubber-coated steel bullets at protesting
Palestinians. More than 1,600 others were wounded.
There
were indications that Israel used “excessive force” against
protesters last week.
“There
are indications that individuals killed or wounded were unarmed or did not pose
a serious threat, and in some cases were actually running away from the Green
Line fence,” Elizabeth Throssell, a spokesperson for the office of
the UN High Commissioner for Human Rights, said of last week’s events.
“This
indicates that security forces used excessive force.”
Yariv
Oppenheimer, a member of Peace Now, a non-government organisation in Israel,
lamented the deaths, and urged the Israeli army to exercise restraint.
“The
Israeli army cannot shoot live ammunition at civilians, especially when they
are not armed.” 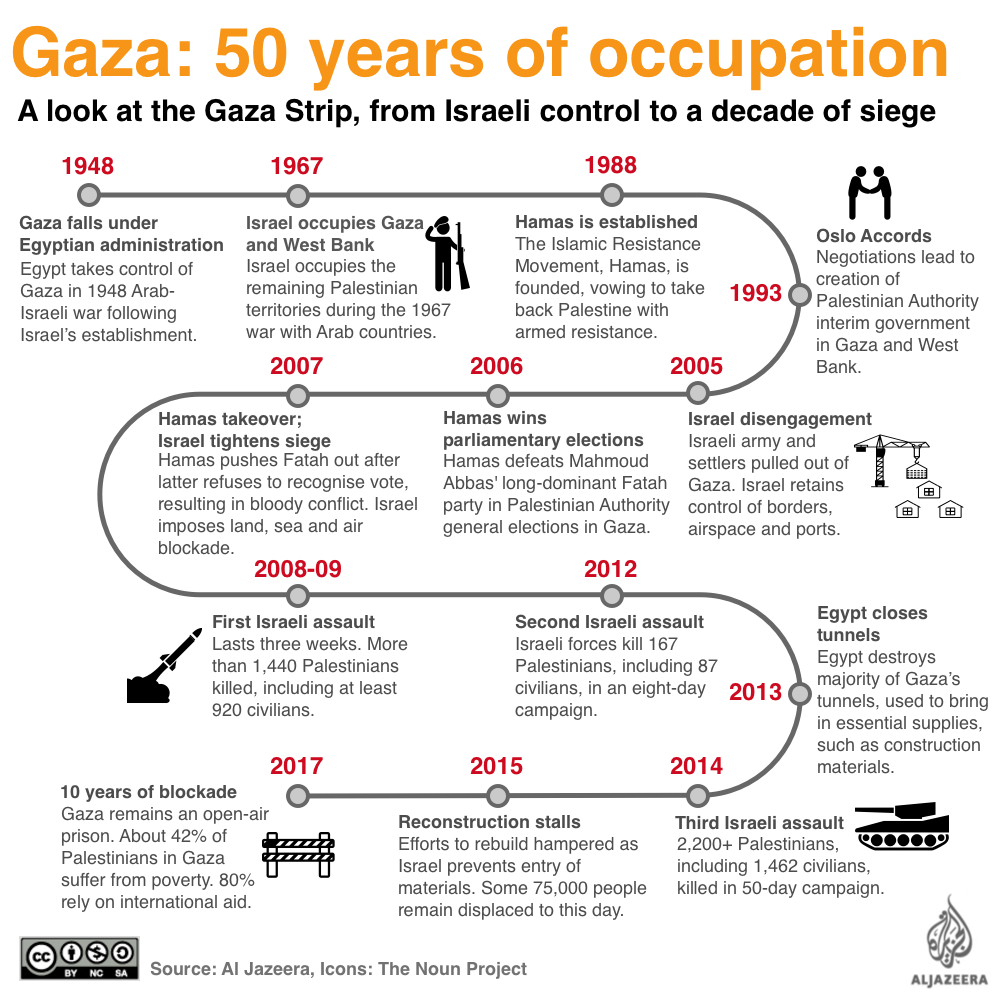 The Gaza
Strip is but one of the focal points in the Israeli-Palestinian
conflict. Although it is part of the Israeli-occupied territories,
the Strip was severed from the West Bank and East Jerusalem when Israel was
created. A range of Israeli restrictions have since been created that further
compartmentalise the Palestinian territories.
Gaza’s
economy has been devastated by years of Israeli military attacks and a joint
Israeli-Egyptian blockade. Israel controls Gaza’s airspace and territorial
waters, as well as two of the three border crossing points; the third is
controlled by Egypt.
Al
Jazeera’s Hoda Abdel-Hamid, reporting from the protests, said anger was boiling
at the protest over Israel’s debilitating blockade on the Gaza Strip and its
deteriorating conditions.
“There
is a deep frustration and anger directed towards Egypt and Israel, but also at
the Palestinian political leadership – because nothing seems to get
better.
“One
young boy told me he was 16 and dropped out of school because he saw no
prospects after he would finish his studies,” she said.
“Many
of these youth at the protest have only known war; all they have seen is pain
and hardship, and they see no end in sight.”
‘Gaza
will stand tall’
In a
visit to Khuzaa camp on Friday, Yahya Sinwar, Hamas’ Gaza head, told
the gathered crowd that the “Israeli plan of starvation and siege”
had “failed to incite the Palestinian people against the resistance”.
“Gaza
will not starve and will not abandon its original national objective,” he
said, surrounded by hundreds of supporters.
“Our
people have told the world that Gaza is free and will stand tall and resist the
Israeli occupation.”
The Great
March of Return is due to end on May 15, the day Palestinians call
the Nakba or
Catastrophe, marking the displacement of hundreds of thousands of Palestinians
in the conflict surrounding the creation of Israel in 1948.
Palestinians
have long demanded that as many as five million direct descendants of the
original Palestinian refugees be
given the right to return to their ancestral homes.
Israel
rules this out, arguing that the return of Palestinians to what is now Israel
would outnumber its Jewish majority.