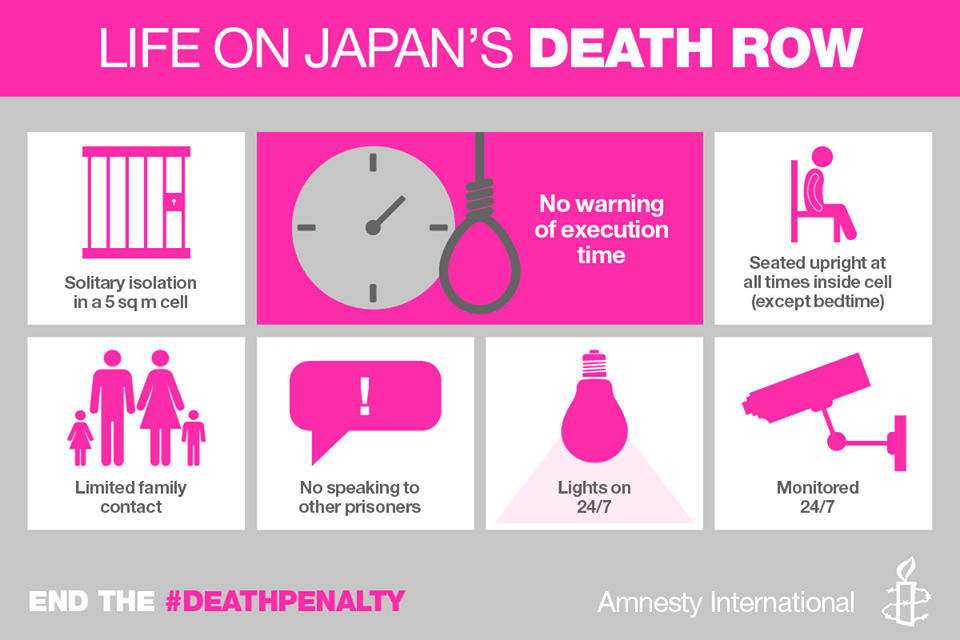 LONDON
(Kyodo) — The human rights organization noted that for the first time since
1999, Japan last year executed people who had their appeals for retrial pending
before the courts. This was the case in three of the four executions in the
country in 2017.
Speaking
at the release of the group’s annual death penalty report, Chiara Sangiorgio,
Amnesty International’s adviser on the death penalty, told Kyodo News,
“What was noticeable last year was that the government breached some of
its own practices as we saw people who were applying for a retrial being
executed.”
“We
also saw someone executed in December even though he qualified under Japanese
law as a minor at the time of the crime.
“It
feels as if things are not improving and we see a sort of cruelty in which the
death penalty is being used with the government going back on some of its own
practices.”
Amnesty
claims these actions represent a breach of protections recognized under
Japanese and international laws and signal a “departure from the practice
observed for 20 years.”
Sangiorgio
also expressed concern about the fate of the 13 members of the AUM Shinrikyo
cult on death row for carrying out the 1995 sarin nerve gas attack on the Tokyo
subway system that killed 13 people and left over 6,000 people ill.
Death
sentences have been finalized for the cult members while some of those
convicted are reported to be seeking retrials.
“We
believe the death penalty does not deter crime and these executions will do
little to improve security in the country,” the Amnesty adviser said.
“We
think that if the cult members are applying for a retrial, then the grounds for
doing so must be considered given previous cases of unsound convictions,”
she said, adding that the group is “also concerned about several death row
prisoners who are displaying symptoms of mental and intellectual
disability.”
In Japan
in 2017, Amnesty recorded four executions and three death sentences issued. By
the end of the year, 123 people had their death sentences finalized by the
courts.
The
organization expressed “concern” that the 2017 figures represented a
small increase on the numbers recorded for each of the years between 2014 and
2016.
While
Japan’s capital punishment has drawn international criticism, a majority of the
Japanese public supports it. A 2014 government survey showed that 80.3 percent
of Japanese people aged 20 or older favored capital punishment, down from a
record 85.6 percent in the previous survey in 2009.
Amnesty
International recorded at least 993 executions in 23 countries in 2017, down by
4 percent from 2016. Most executions took place in China, Iran, Saudi Arabia, Iraq
and Pakistan. China remains the world’s top executioner but the data is
classified as a state secret. Amnesty estimates “thousands” are
executed in China.