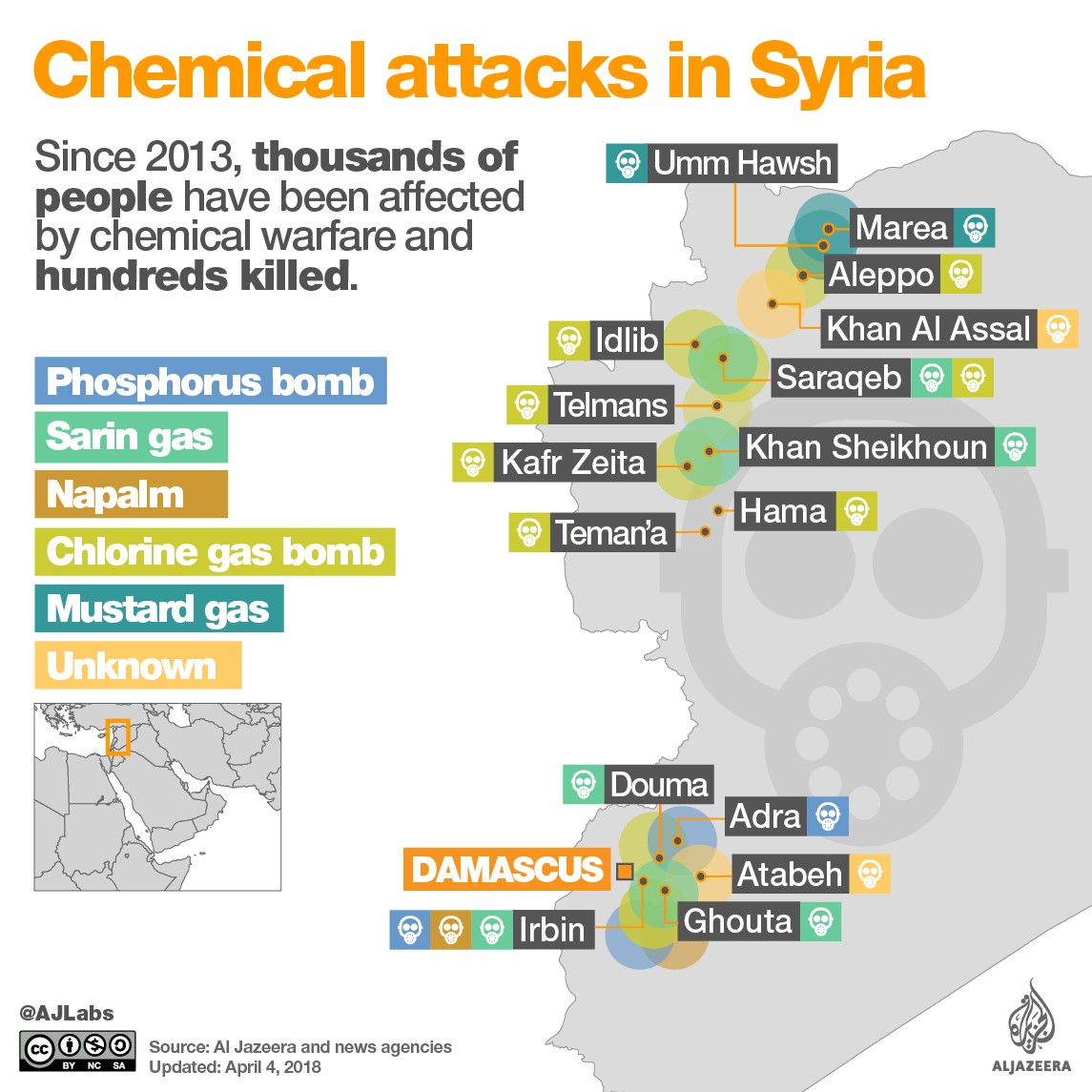 On April 4, 2017, Syrian air raids pummeled the small
rebel-held town of Khan Sheikhoun in the northern province of Idlib.
As news of the attack spread, it quickly became
apparent that something other than conventional weapons had been used.
Residents told Al Jazeera they saw people choking and foaming at the mouth,
“suffocating while their lungs collapsed”.
More than 80 people, including many women and
children, died when nerve agent sarin or a sarin-like substance was dropped
onto Khan Sheikhoun. Hundreds more were wounded, in one of the worst chemical
attacks since sarin gas killed hundreds of civilians in Ghouta, near the
capital, Damascus, in August 2013.
Syria’s government has denied involvement and claims
it no longer possesses chemical weapons after a 2013 agreement under which it
pledged to hand over thousands of tonnes of deadly
chemical agents following US threats of a unilateral attack.
But in October 2017, the Joint Investigative
Mechanism, a group tasked by the UN Security Council and the
Organisation for the Prohibition of Chemical Weapons (OPCW) to investigate chemical
weapons attacks, confirmed that the chemical attack on
Khan Sheikhoun did happen, and that the Syrian government was responsible for
the killing of civilians.
On the one-year anniversary of the Khan Sheikhoun
attack, Al Jazeera’s Faisal Edroos spoke with Hamish de Bretton-Gordon, a chemical weapons adviser to NGOs working
in Syria and Iraq, about the usage of chemical weapons by the Syrian
government, and what can be done to prevent their use.
Al Jazeera: How many chemical weapons
attacks have there been since the start of the Syrian uprising in 2011?
Hamish de Bretton-Gordon: While it’s difficult to gauge exactly what has
been done and where, we’ve seen the use of sarin in Khan Sheikhoun as well
as in Ghouta – that’s where hundreds of people, including scores of women
and children, were killed.
But it’s predominantly chlorine barrel bombs, dropped
from regime helicopters, that make up the bulk of the regime’s attacks.
Al Jazeera: What has been the
international community’s reaction?
De Bretton-Gordon: It’s ridiculous that the international community
continues to turn a blind eye to the crimes being perpetrated in Syria.
A red line has been crossed and the US hasn’t acted as
it said it would.
After the Khan Sheikhoun attack, the Trump
administration launched a few Tomahawk missiles to take out the Syrian aircraft
that bombed the town. But aside from that, they’ve done very little.
Instead, the 100-year taboo on the use of chemical
weapons has been completely broken.
Now, any despot, dictator, rogue state, terrorist,
sees chemical weapons as a viable weapon. We could end up seeing more chemical
weapons proliferation across the world than we’ve been witness to.
Al Jazeera: Why is it difficult to determine whether a chemical
attack has taken place?
De Bretton-Gordon: The OPCW can’t get into Syria, and since most attacks
happen in rebel-held areas it’s difficult to obtain the necessary evidence.
Assad and the Russians [Syrian government allies] say
they don’t use chemical weapons, but the OPCW hasn’t been able to collect
enough evidence that can prove otherwise.
The OPCW needs to review of its operations and the
international community needs to state categorically that they won’t stand for
chemical weapons attacks and will take action – which is something they haven’t
been able to do.
Al Jazeera: Most of the information
obtained from rebel-held areas is filmed by local activists and
subsequently posted on social media. Can videos of chemical attacks uploaded on
such platforms be trusted and how do we know they’re not fake news and
disinformation?
De Bretton-Gordon: The Union of Syrian Medical Care and Relief
Organizations (UOSSM) has more than 50 hospitals across Syria, and we’ve
treated many of the casualties affected by the regime’s chemical weapons
attacks.
Hospital staff have told me [about treating chemical
attacks victims] and even I … investigated a chemical weapons attack.
Hence, I can state quite unequivocally that there have
been several chemical weapons attacks in the country.
So with all the evidence I’ve collected over the past
four-and-half years, coupled with videos uploaded to social media, eyewitness
testimony and samples that have been analysed, we have proof that the Syrian
regime has and does use chemical weapons.
Al Jazeera: Pro-Assad supporters have
accused some of the victims of being “paid actors” and peddling a
false narrative. Is there any truth to this?
De Bretton-Gordon: When people come to our hospitals, they’re received by
trained medical professionals, so we can tell if people are faking it. So, no,
we haven’t seen any paid actors.
I’m absolutely confident that the Syrians who appear
in videos exhibiting trauma from chemical attacks are real and they are who
they say they are.
Al Jazeera: Do the rebels have the
capabilities to launch chemical attacks?
De Bretton-Gordon: The so-called Islamic State group (ISIL, also known as
ISIS) launched chemical attacks against civilian populations in both Syria and
Iraq, mainly against the Peshmerga (Kurdish fighters), and its quite
possible that al-Qaeda linked groups such as Jabhat Fateh al-Sham
(formerly known as the al-Nusra Front) have as well.
But when it comes to groups such as the Free Syrian
Army, there hasn’t been any evidence of that.
Al Jazeera: Is there anything that the UN,
regional powers can do to stop attacks on civilian areas?
De Bretton-Gordon: The international community has to reimpose its view
that the use of chemical weapons is prohibited and it will act firmly should
the Assad regime persist.
What has to happen is they have to launch air
strikes through the UN Security Council, just as they did after the
Khan Sheikhoun attack.
That is the only way we can stop chemical attacks in
the future.