January 6, 2018February 23, 2021 by milena rampoldi
A Palestinian teen was shot and killed by Israeli forces on Friday near the Deir Nitham village, northwest of Ramallah city in the central occupied West Bank.
The Palestinian Ministry of Health said that the teen arrived to the Istishari Hospital in Ramallah City in critical condition, after he was shot in the back of his head.

Nile Bowie@NileBowie
The first Palestinian to be shot dead by Israeli forces in 2018 is 17-year-old Musab Firas al-Tamimi, a relative of jailed teen activist Ahed Tamimi. It is baffling what this family and countless other displaced Palestinian families are forced to endure.https://www.aljazeera.com/news/2018/01/palestinian-teen-killed-israel-2018-180103154409357.html …

Palestinian teen first to be killed by Israel in 2018

Twitter Ads info and privacy
The ministry identified him as Musaab Firas al-Tamimi, 17.
Israeli forces shot the teen, reportedly from a close range, during clashes that had erupted in the village after Israeli forces raided the area.
Three other Palestinian youths were injured with rubber-coated steel bullets during the clashes.

Twitter Ads info and privacy
Hebrew-language media, meanwhile, reported that Israeli forces had opened fire on a Palestinian near the Illegal Israeli Halamish settlement, nearby Deir Nitham, for allegedly carrying a gun.
An Israeli army spokesperson told Ma’an they were looking into reports. 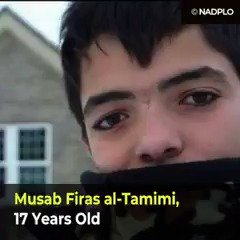 @nadplo
Musab al-Tamimi was killed in a protest against the US administration’s decision to recognize #Jerusalem as the capital of Israel. He is the 15th Palestinian killed by Israel since 6 December 2017. #Palestine