UN peacekeepers leave Haiti: What is their legacy?

As the controversial 13 year peacekeeping mission in Haiti wraps up, Al Jazeera examines what the mission leaves behind. 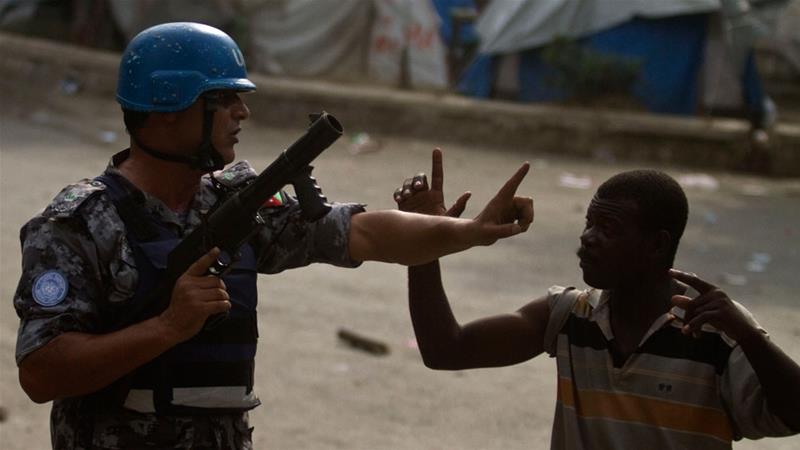 The United Nations peacekeeping mission in Haiti lowered its blue flag on Thursday, 13 years after it began.

While the mission has been credited with helping bring stability to the poorest country in the Western Hemisphere, it has also been mired in controversy.

The mission is blamed for bringing cholera to the country, and at least 134 of its peacekeepers have been involved in sexual abuse scandals.

As the last of the thousands of peacekeepers who were in the country leave, Al Jazeera answers some of the key questions about why the blue helmets were there and what they are leaving behind.

What will be their legacy?

The presence of UN troops in Haiti has been a point of controversy on the island since the UN Stabilization Mission in Haiti (MINUSTAH) mission first began in 2004.

UN officials have praised the mission for helping to re-establish law-and-order in the country marred by political unrest and bolster Haiti’s democratic institutions. MINUSTAH has also helped recruit and train a new civilian police force, something that was virtually nonexistent before their arrival.

However, critics argue the mission’s forces have done more harm than good, pointing to the peacekeepers’ involvement in the country’s 2010 cholera outbreak and sex abuse scandals as evidence.

The source of the waterborne disease, which killed more than 9,000 people, was traced to a UN base.

Al Jazeera’s Fault Lines investigated the outbreak in 2010. The film – Haiti in a Time of Cholera – helped further expose the source of the disease on the island, and put additional pressure on the UN to investigate the allegations, and eventually admit its role in the outbreak.

In August 2016, the UN for the first time acknowledged that it played a role in the spread of the disease.

The UN at the time promised to respond to the epidemic with a “significant new set of UN actions”.

In a report, the then UN Secretary-General, Ban Ki-moon, said that “the preponderance of the evidence does lead to the conclusion that personnel associated with [a UN peacekeeping] facility were the most likely source”.

Ban said the way the UN handled the outbreak “leaves a blemish on the reputation of UN peacekeeping and the organisation worldwide”.

Ban created a $400m voluntary trust fund for Haiti’s fight against cholera. The fund was also supposed to partially compensate victims of the disease.

But earlier this year, The New York Times revealed that the fund only received a few million dollars and was nearly empty.

In a statement in June, the UN deputy secretary-general said that “without additional resources, the intensified cholera response and control efforts cannot be sustained through 2017 and 2018”.

Rape and other forms of sex abuse

UN troops have also been implicated in sexual abuse scandals in Haiti since the MINUSTAH first began.

Most recently, a UN report obtained and revealed by The Associated Press in April documented the sexual exploitation of nine children on the island from 2004-2007 at the hands of at least 134 peacekeepers.

Al Jazeera later spoke to Maria Kalichi*, who had been raped by a peacekeeper when she was 17 years old. She became pregnant as result of the rape.

“I want justice by finding the person who did this,” she told Al Jazeera.

“I want to hear what he has to say to me … I am walking around the streets feeling destitute because of the UN.”

A leaked report in 2015, found that UN peacekeepers in Haiti engaged in “transactional sex”. At least 229 women said they traded sex for money and goods likes food and medicine.

In 2012, at least two peacekeepers from Pakistan were jailed and fired from the army after raping a 14-year-old boy.

Other cases of rape and other instances of sexual abuse have been reported and documented by the UN during the mission’s 13-year term.

In September, a UN fund to help the survivors of sexual abuse by peacekeepers worldwide grew to $1.5m after more than 10 countries made contributions.

Why were they there in the first place?

MINUSTAH, running since 2004, was the latest installment in a series of UN peacekeeping missions in the country, which shares a landmass with the Dominican Republic.

Peacekeepers first arrived in Haiti, home to 10.8 million people, in September 1993 as part of The United Nations Mission in Haiti (UNMIH).

The mission had a mandate to modernise the Haitian army and establish a new national police force two years after Haiti’s elected president, Jean-Bertrand Aristide, had been removed from office during a coup d’etat.

After Aristide was restored to office in October 1994 following the UN-sanctioned, and US-led, “Operation Uphold Democracy” launched the month before, the mission’s mandate was expanded to include helping to stabilise the government.

However, UNMIH, which concluded in June 1996, appeared to have failed to deliver long-term stability. A decade later, history repeated itself as Aristide was overthrown for a second time.

Alexandre appealed to the UN for help in ending the violence that had gripped Haiti in the wake of the political revolt, causing crime and murder rates to spiral.

Why has it taken so long for them to leave?

MINUSTAH was originally set up to support Haiti’s transitional government for a period of six months, with the aim of establishing a stable and secure environment following Aristide’s removal.

The mission was extended with adjusted mandates in the months and years that followed in order to allow peacekeepers to “adapt to the changing circumstances … and evolving requirements as dictated by the political, security and socioeconomic situation prevailing in the country”, according to the UN.

By the beginning of 2010, it appeared the mission had achieved its goals as violence had largely been removed from Haiti’s politics and the country was experiencing economic growth.

In response, the UN added additional peacekeepers and police officers to its mission as it sought to support the country in its efforts to rebuild following the earthquake.

Force numbers have been gradually reduced in the last seven years, by a series of resolutions.

Why are they leaving now?

The UN Security Council (UNSC) unanimously adopted a resolution in April of this year, ordering the removal of peacekeepers from Haiti by mid-October.

The April 13 resolution sanctioned the gradual withdrawal of the 2,370 peacekeepers stationed in Haiti, according to The Los Angeles Times.

The resolution was the result of a US-led review into the cost and effectiveness of the UN’s current peacekeeping operations.

Nikki Haley, the US representative to the UN, told the UNSC prior to the vote that the political context was right for the withdrawal of a military presence in Haiti.

The “peaceful transition of power” demonstrated by Haiti’s November 2016 presidential election showed the country had made an “important step towards stability and democracy”, she said.

As such, developments warranted an amended approach focused on fostering “the independence and self-sufficiency of the Haitian people”.

The peacekeeping mission will officially end on October 15 when a new UN mission made up of nearly 1,300 international civilian police officers, and about 350 civilians will begin in an effort to help the country reform its political system.

In a recent interview with Al Jazeera, Sandra Honore, head of MINUSTAH, said the UN is winding down the mission because it has achieved its aims.

“It is a vote of confidence in the Haitian people,” she said.

“It is an indication of the recognition by the Security Council that the stabilisation work which was entrusted to the mission did in fact produce positive results.”

What have Haitians said about the mission?

Though February’s presidential election seems to demonstrate Haiti is more politically stable now than when MINUSTAH began, a number of Haitians recently told Al Jazeera the mission has done little to improve their lives.

Mothers who say they have had children, fathered by peacekeepers, also say they feel abandoned.

“After years of running around and false promises from the UN, nothing has happened,”  Saintil Benite, a mother, told Al Jazeera.

“They make us do a lot of stuff but there’s no results,” she said.

Another mother, Roselaine Duperval, added that the mission has failed those people it sought to serve.

“I am very angry that the UN is leaving as it’s left us with nothing,” she said.

“They should take responsibility. They know about the kids. They did DNA tests and they told us they’re positive but never give us the results.”

Protests last month over the government’s new budget plans brought much of the country to a halt.

The government has defended its plans, which include increased taxes on fuel and property, saying the money raised will be invested in improving public services and infrastructure.