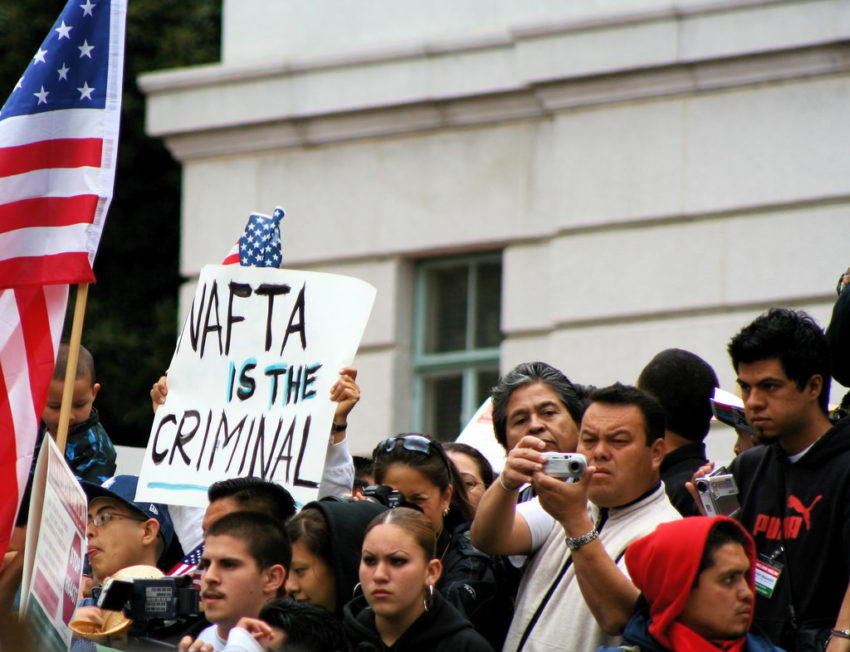 The NAFTA-2 negotiations seem to be faltering after the fourth round of talks recently held in the United States. The Trump administration is pushing Mexico and Canada aggressively to include provisions from the Trans-Pacific Partnership (TPP) and Trans-Atlantic Trade and Investment Partnership (TTIP) in order to renegotiate NAFTA in a way that benefits U.S. corporations. Mexico and the U.S. are under particularly high pressure to complete the talks successfully as each country has major elections in 2018.

News reports of the highly secretive talks describe the negotiations as hitting roadblocks. While this is good news, if it is accurate, this is the time for people in Mexico, Canada and the United States to call for each government to not only withdraw from the talks but also to abandon the corporate model of trade that puts profits before protection of people and the planet. Our view is—if it doesn’t work, don’t fix it, get rid of it and adopt a new and more positive trade model.

After seven straight days of talks fraught with emotion, officials representing the U.S., Canada and Mexico were at seeming loggerheads over several American proposals that observers fear could derail the negotiations and ultimately cause an unraveling of the 23-year-old North American Free Trade Agreement.
Further, they report “observers briefed by trade negotiators said the mood during the latest session of talks had turned grim and pessimistic, and that most everyone expected Canada and Mexico to roundly reject U.S. efforts to weaken NAFTA’s regional structure with U.S. protectionist measures consistent with Trump’s ‘America first’ agenda.”

Reuters described a grim reality, writing that the disagreements are so extreme that they could result in the end of the trade agreement:

Some downcast participants said the demands, unveiled this week in line with Trump’s ‘America First’ agenda, have increased the odds of NAFTA’s demise. At the very least, they could make it impossible to reach a deal renewing the treaty before a year-end deadline.
CNBC also warned that time may run out, saying the negotiators are working on a schedule that is “a very tight negotiating schedule—described as ‘insane’ by one official.” The initial goal was to complete the talks in December of this year in order to avoid the Mexican presidential election. The current pro-corporate president, Enrique Peña Nieto, is very unpopular and is likely to be replaced.

The divisions between the countries were on clear display as the round of talks wound down. The Star reports that Canadian “Foreign Affairs Minister Chrystia Freeland blasted the Trump administration’s NAFTA proposals publicly for the first time in an awkward joint press conference in Washington on Tuesday, the clearest sign yet that negotiations are strained to the breaking point.”

Freeland denounced the U.S. for “an approach that seeks to undermine NAFTA rather than modernize it,” warning that the “unconventional” proposals from President Donald Trump’s administration would “turn back the clock” and put tens of thousands of jobs at risk. U.S. Trade Representative Robert Lighthizer criticized Canada and Mexico for refusing to agree to provisions that they previously accepted in the TPP.

Things are going so badly in the negotiations that the parties have decided to take a short break. Rather than meeting every two weeks, they’ve pushed the next round back to a month and the deadline for completion of the re-negotiations into early 2018.

BBC reports that in an October meeting with Justin Trudeau, President Trump said he would pull out of NAFTA and be open to a new bilateral agreement between the U.S. and Canada if the NAFTA-2 negotiations fail.

NAFTA was the start of a long line of disastrous trade deals that put the interests of large corporations ahead of the necessities of people and planet. Now that people see the results of this model of trade such as a race to the bottom in wages and worker’s rights, environmental destruction and an erosion of democracy, there is widespread opposition to “free trade.” This was evident in the large movement of movements that stopped the TPP and stalled the TTIP.

For now, the best way to stop NAFTA is to heighten the controversies so that the talks continue to be delayed. As we did with the TPP, we can push the talks into the election season and make our positive agenda for trade a part of campaigns.